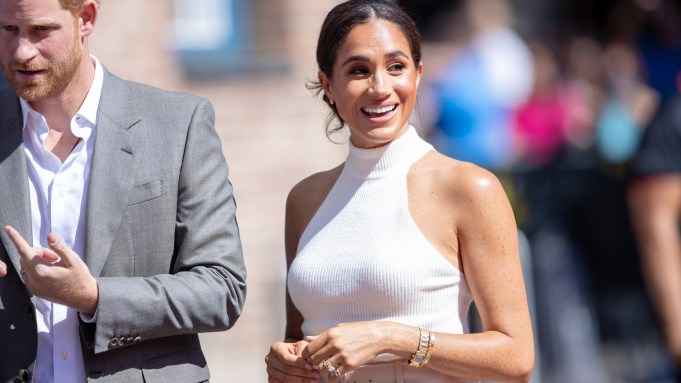 Meghan, Duchess of Sussex’s return to Europe has so far been filled with nods to her late mother-in-law Diana, Princess of Wales who died 25 years ago last week.

The duchess is visiting Europe with her husband Prince Harry, and attended an Invictus Games event on Tuesday afternoon in Dusseldorf, Germany.

The couple were there to mark the one-year countdown to the 2023 games, which were delayed due to the pandemic. Next year will mark the sixth edition of the games, which Harry founded in 2014.

Markle wore a lightweight halter-neck sweater from the Los Angeles-based brand Anine Bing. She paired it with belted, pleated wide-legged trousers from Brandon Maxwell. Her sweater resembled the white Stella McCartney dress she wore to her wedding reception in 2018.

This is the second time this week that the duchess has worn Brandon Maxwell. Markle’s choice of American designers is a clear signal that she’s stepped away from her life in the U.K., and is fully recommitted to the U.S.

Princess Diana’s Cartier Tank watch became one of her staples after her divorce from Prince Charles. The brand has become a favorite with the Duchess of Cambridge, who owns a Cartier Ballon Bleu watch in steel.

The Invictus Games are sentimental to Markle and Harry. They first appeared publicly together at the 2017 games. At the time, Markle wore The Husband shirt from her friend Misha Nonoo’s brand.