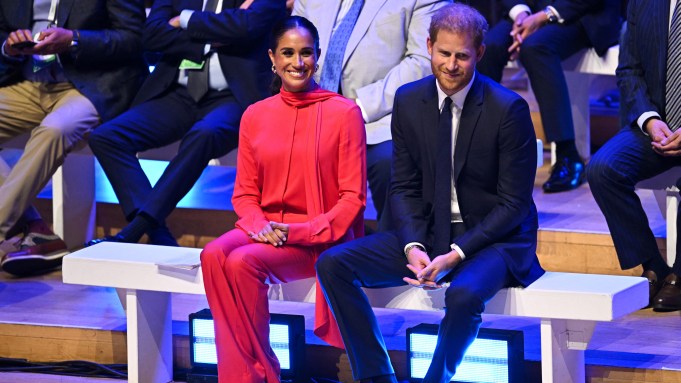 LONDON — Meghan, Duchess of Sussex, is back on U.K. soil again with her husband Prince Harry.

The couple traveled from London Euston to Manchester by train to the One Young World summit, where Meghan gave a keynote speech in front of an audience of 2,300.

The event brings together young voices from more than 190 countries with delegates from companies such as Audi, Dior, Swarovski and more.

Markle spoke on gender equality. In 2019, she met with youth ambassadors at Windsor Castle to discuss the topic.

On the way to the event, the duchess wore a light camel silk cashmere polo from American label Brandon Maxwell with wide-legged trousers in a similar shade and suede Manolo Blahnik heels.

Since Maxwell launched his brand in 2015, it has been worn by powerful women who often speak out about social injustices such as Michelle Obama, Queen Rania of Jordan and Oprah Winfrey.

Maxwell was the first male designer Markle wore after her wedding to the Duke of Sussex on a trip to the Your Commonwealth Youth Challenge reception in London in 2018.

Markle’s appearance comes at a critical time in the U.K. as the government has just named its new prime minister, Liz Truss, who beat her Conservative Party rival Rishi Sunak with 57.4 percent of the vote in an election process that began in early July.

The Duke and Duchess of Sussex have not been afraid to speak out against politics in the past, but on home turf it’s likely they will follow the royal protocol of not voicing a preference on the subject matter.

At the evening event in Manchester, England, Markle went full American by wearing Another Tomorrow: a red blouse with matching wide-legged trousers. She finished the look with Aquazzura heels.

The monochrome ensemble could be a light tribute to Harry’s mother Princess Diana, who passed away 25 years ago last week. Just before her death in 1997, Diana wore a red halterneck Valentino dress in British Vogue in a photograph by Patrick Demarchelier.

Markle began her speech by saying, “It is very nice to be back in the U.K.” She went on to recall the first time she was asked to be an ambassador for the organization in 2014 and referenced her acting days.

“And there I was, the girl from ‘Suits.’ I was surrounded by world leaders, humanitarians, prime ministers and activists that I had such a deep and long-standing respect and admiration for. And I was allowed in, to pull up a seat at the table,” she said.

“I was so overwhelmed by this experience, I think, I think I even saved my little paper place-marker with my name on it.”

The duke and duchess will continue their European tour by visiting Dusseldorf, Germany, on Tuesday for the Invictus Games and will return to London on Thursday for the WellChild Awards ceremony.