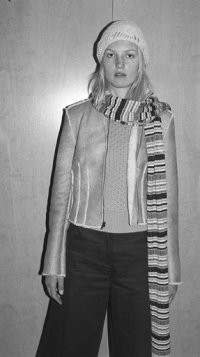 NEW YORK — After growing his day and evening dress line into a $20 million business, David Meister is launching a signature sportswear collection for fall.

It will be geared toward department stores that carry the dresses — such as Lord & Taylor, Neiman Marcus and Saks Fifth Avenue — as well as specialty stores across the country, and is expected to reach $4 million to $5 million in sales in its first season.

The 120-piece collection is comprised of skirts, pants, knit tops and outerwear. Throughout, there is attention to details, such as novelty top-stitching, closures such as metal snaps and wood buttons, as well as a focus on high-quality trims. Fabrics come primarily from Italy and the line also features cashmere knits and Italian leather used for the outerwear.

“Each piece needs to have a reason, each piece needs to be able to stand alone,” said Meister in an interview at his West 39th Street showroom that will be expanded in the coming months to accommodate the sportswear. “Nobody needs another skinny cotton skirt.”

According to Meister, sportswear has always been a part of the picture since he launched the David Meister dress label for fall 1999. David Meister is a division of Kellwood’s ENC division.

“Even at the beginning we knew we wanted to do it,” said Meister. “But it’s been the success of the dresses that really allowed us to do it.”

Although the dress business is almost fully manufactured domestically in contracted factories, David Meister Sportswear will be produced primarily in the Far East, with knitwear and leathers manufactured in Italy along with some domestic production.