Men of the Cloth? Not Always

For both designer and consumer, fashion is about exhibitionism. 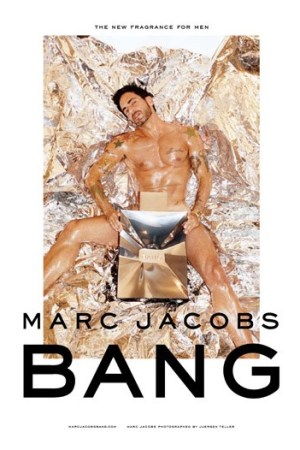 Tom Ford did it with a pair of sex dolls. And with two guys in a shower.

Marc Jacobs did it on a T-shirt, and with a perfume bottle.

Stefano Gabbana did it (almost) in stilettos.

And, as with le Smoking and Safari, Yves Saint Laurent did it first.

Get naked, that is.

Most recently, Jacobs bared all for the ad campaign for his new, provocatively named men’s fragrance, Bang, which shows him spread-eagle on a Mylar throw, a huge fragrance factice covering the nonfashion jewels. “We tried it with clothes,” he said, “but it didn’t work.”

“Everybody looks better naked,” Ford has said more often than one can count.

Is that any way for fashion designers to talk?

Not if we still lived in the long-gone days when obvious merch flaunting was the better part of marketing. Now, the explosion of new media and resulting obsession with constant consumer contact via tweets, streams and apps have deepened the frenetic fusion of medium and message, with the former more often than not dominating the discussion. Then somebody takes his clothes off for the camera, and the age-old concept of message clarity jumps front and center: sexy, daring man; sexy, daring brand; if you buy into it and relate to it, you must be sexy and daring, too.

The willingness of designers — make that, designers of a certain ilk — to get naked for public view hits on a number of motifs. It doesn’t hurt that the three living aforementioned men, all well past 40, are naturally handsome, spend a good deal of time perfecting their physical assets and aren’t afraid to show pride in their efforts. And yes, gender (can you imagine Miuccia Prada or Donna Karan revealing all in the name of artful commerce?) and sexual orientation factor in. Recall Rupert Everett’s line to Julia Roberts in “My Best Friend’s Wedding”: “Gay, like most devastatingly handsome single men of his age are, you think.”

For a 1971 YSL Pour Homme ad, Saint Laurent posed nude, sitting with one leg twisted strategically, his bespectacled gaze piercing the camera. “It’s created a lot of stir, and that’s why I did it,” he told WWD at the time, noting that the sphere of backlight encircling his head added “a biblical quality.” No shortage of ego there, or guts — two essential traits in fashion.

For both designer and consumer, fashion is about exhibitionism. “Look at my stuff.” “Look at me wearing his stuff.” For the designer, it’s about baring all: one’s talent, ambition, drive, dreams. When a designer shows a collection, he is out there, naked, for the world to weigh in. While one can be genuinely private and succeed brilliantly in fashion, at least artistically (Martin Margiela), he cannot be meek. Some level of bravado, of belief in the fabulousness of the self, is essential. Designers are the living, breathing personifications of their brands. When Gabbana and Domenico Dolce stripped down for W magazine in a February 2007 editorial that commingled S&M and Catholic currents, the designers’ embrace of the outrageous pushed further the high-steam image so carefully constructed for their house, the core consumer of which is chic, mainstream and middle-age.

Just like the designers. Dolce, Gabbana, Ford and Jacobs are not edgy 20-year-olds from Antwerp. Provocateurs all, to be sure. Yet all are or have been the driving creative forces behind megaglobal luxury brands which play primarily to a rarefied, yet ultimately mainstream, consumer base. As a first-time film director, Ford stressed the universality of his dazzling debut, “A Single Man.” As a designer, though he now eschews the kind of “mass luxury” he propagated at Gucci and that made him rich and famous, when he snuggled up between those two plastic gals for W in November 2005, it was to herald the launch of his beauty collaboration with Estée Lauder. (There were rumors aplenty that, though accepting, the Lauder brass was not thrilled.)

Typically, the raciest marketing material targets a brand’s most influential, and tolerant, audience. (Coty already knows it will substitute more and most conservative versions of the Bang ad for the Midwest and Middle East, respectively.) That, in this day of unfettered access to every kind of visual imagery at the tap of a screen, nudity can still cause a stir is remarkable in itself. And even the worldly take notice. Upon arriving at work one day last week, Oscar de la Renta was told by company chief executive officer Alex Bolen that he wanted to discuss a new fragrance campaign concept. Bolen promptly unveiled a reworked mock-up of the Bang ad, Jacobs’ face and bottle replaced with Oscar’s.

So what does the polished, sometimes judgmental, de la Renta have to say about brand-building by nudity? Far from aghast, he mused on what might have been. “Unfortunately, my body is no longer in a condition to be exhibited in such a manner,” he said. “I never considered it — but much to my regret.”