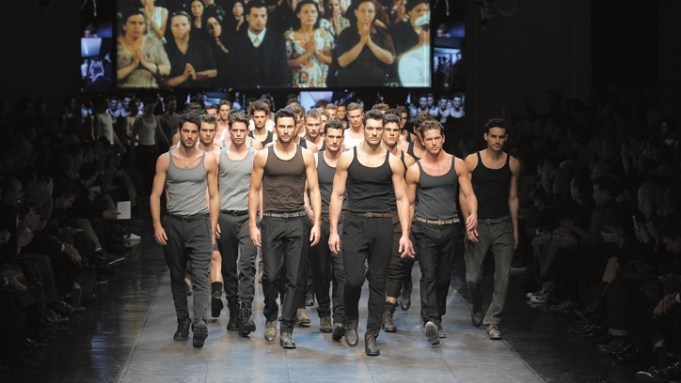 Popcorn would have been the perfect accessory for those attending the fall men’s shows in Milan and Paris.

Just ask John Galliano, who believes there is nothing like a little movie magic to build excitement. “Fashion shows are trailers to a whole season,” Galliano observes, riffing on a modern interpretation of Sherlock Holmes, the super sleuth recently portrayed by Robert Downey Jr., for fall.

In both cities, celluloid scene-stealers transported audiences from cramped show spaces to far-flung locales. In the case of Dolce & Gabbana, guests were directed to Sicily, since images from the Italian film Baarìa were used as a backdrop.

“The idea was to bring out different moods and expression, because just like with a movie, we wanted to leverage the emotional side,” explains Stefano Gabbana. Prepped with acting classes to best interpret their roles, glowering models-cum– film stars entered in packs from stage left to a melancholic Ennio Morricone soundtrack, echoing the emotion-packed scenes from the film, which included handsome Latino men hanging out in tattered corduroys and tank tops, hordes of people massed on the street at a Sicilian village festival and a little boy running as fast as he could to see if he could fly.

But playing tear-jerker movies wasn’t the only way to get a rise out of the audience. Pringle of Scotland’s creative director, Clare Waight Keller, for instance, tapped a fellow Scot, artist David Shrigley, to dream up a whimsical animated short about the making of Pringle’s knitwear that had guests, including Tilda Swinton, in stitches. “Dude, that was brilliant. I want a copy for my kids,” Swinton said on the sidelines of the show.

It was a learning experience for Waight Keller as well as for Shrigley, who admitted, prior to filming, that he had no idea what a twinset was. “David’s film didn’t directly influence my collection, but it absolutely made me think about Scotland, its traditions and heritage,” Waight Keller recalls. “He could give another point of view, almost in layman’s terms, and teach us not to take ourselves too seriously.”

It’s also a viable communications tool, to boot. The film generated more than 40,000 hits on YouTube alone. “It has been such a wonderful way to communicate the message with humor, which is infinitely more memorable,” Waight Keller says.

“So few designers these days have trust in the creative process, and that’s why I wanted to be a part of Stefano’s world,” says Weber of the collaboration. “Although he has returned men’s to a formal runway show, Stefano Pilati remains committed to film as a means of presenting fashion.”

Galliano took the movie theme one step further by homing in on the Sherlock Holmes concept.

“A fashion show is created with a script—that is told through the clothes. The models are our silent movie stars…the hair, makeup, music and all that’s in between help set the tone, the scene, and tell a whole story in only 20 minutes and 40 looks,” says Galliano, whose evocative interpretation of the quintessential English detective veered between a learned gentleman by day and an opium smoking martial artist by night.

“Film inspires fashion—just as fashion inspires and styles film. I like to blend the two, fiction and real, and create modern-day pinups.…When I am creating a collection, I like to look at many muses, many inspirations and fuse them together to create my own characters.”

Donatella Versace traveled back to the future via the cyberpunk universe depicted in the forthcoming Tron sequel.

The Italian designer logged on to YouTube to watch trailers from the original 1982 film by Steven Lisberger and the upcoming remake, Tron Legacy.

“Cyberpunk for me represents modernity and a good dose of antiestablishment,” says Versace. “Those nocturnal colors—black, gunmetal and navy with vivid accents of purple, turquoise and blue—and the sci-fi prints, have a cosmic feel to them, which are reminiscent of the dark and luminous computer world of Tron.”

The designer also took a cue from Tim Burton’s Alice in Wonderland for her recent women’s collection. But while often an inspiration, Versace says her collections are never a complete homage to film: “Versace first—external inspiration second. The ad campaign shows the clothes. No cosmic speed bikes or Mad Hatters!”