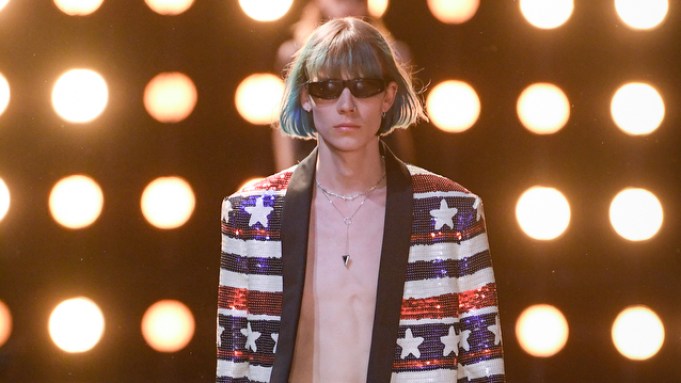 Hedi Slimane’s love of American youth culture has been a point of reference for his menswear creations over the years, and his latest spring 2023 men’s collection — infused with rock ‘n’ roll — was no exception.

American flag prints in blazers, artfully crafted faded jeans, oversize leather outerwear embellished with studs, fringe and allover sequins, with a few Elvis-worthy retro tuxedoes, were among the coolest examples of that American rocker style, with a touch of grunge that Slimane is known for.

For Dsquared2’s collection, the Americana trend was surf-inspired. “There’s enough bulls–t in the world, enough hate. We want to be as positive as possible, chilled down and more connected,” said Dsquared2 codesigner Dan Caten about his menswear collection backstage after their show. That relaxed and chill attitude came through in a colorful collection that centered around American surfing culture, featuring inventive layering, floral-print clashes, a few ’70s retro references and an overall leisurely mood.

Mike Amiri, one of the many American designers that descended over Paris Fashion Week, also brought the Americana trend to the forefront of his spring collection. ”Amiri draws much inspiration from the archive of classic Americana that he keeps,” wrote Samantha Conti in her Amiri spring collection review.