Menichetti Races Back Into Fashion

Following a 21-month hiatus from fashion, Roberto Menichetti is back with ambitious plans and major partners. Here’s an update. 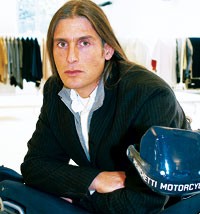 GUBBIO, Italy — In the whitewashed workroom, where the drone of sewing machines fills the hours, Roberto Menichetti’s mother, Yvonne, approaches the designer holding a white cotton shirt collar. “Roberto, all I need are a couple of minutes for you to approve this collar,” she asks softly.

Cornering Menichetti these days is hard even for his mom, as the long-haired designer works into the wee hours of the morning to finalize his first signature collection, simply called Menichetti, which will debut on Feb. 10 with a presentation during New York Fashion Week.

Following a 21-month hiatus from fashion, Menichetti is back with ambitious plans and major partners. His latest venture is being financed by Richard Fischer and his wife, Jeanne Donovan, an independent theater producer in New York. Fischer is chairman emeritus of Morgan Stanley and a high-profile figure in the financial community, as well as the chairman of Menichetti’s company.

While Fischer declined to reveal the amount of his investment, sources said it totals several million dollars. The five-year distribution plan is still being hammered out, but foresees directly operated stores flanked by selected points of sale. In the first year, Menichetti expects to hit 100 stores worldwide, while in the U.S., 50 directly operated stores are slated to open over the next five years. He added that it is premature to discuss sales projections, and no sites for stores have yet been found.

Menichetti, the son of Italian immigrants who was born in Buffalo, N.Y., resigned as creative director of Burberry in 2001. During his three years at the London-based luxury goods company, he oversaw the launch of its high-end Prorsum line and helped wipe the dust from its iconic plaid, making it shine again. After one season at Cerruti, he left in March 2002 to introduce his own label, first planning to do so in September 2002, but then taking his time to find the right partner.

Launching his own brand was the most natural step for the 37-year-old designer, who also headed up the design team at Jil Sander for five years and was Claude Montana’s protégé in the late Eighties. “I’m happy to be entering the fashion world with my project at this moment. We’ve entered the Age of Aquarius and I feel that the world is changing,” said the designer in an exclusive interview. “I’m eager to perceive and translate people’s needs through fashion, which I view as a form of applied art and as an expression of contemporaneousness.”

The thoughtful Menichetti is predictably sticking to his less-is-more design approach, which translates into evolution over revolution, craftsmanship over showmanship.

The project contemplates one main line in which deluxe pieces, technical items and basics coexist and where each garment is treated as a single piece that is easy to mix and match. Future plans include watches, jewelry, homewear, fragrances, activewear and a children’s line. The production is currently all in Italy, but Menichetti said that he is open to farming some of it out to China or Brazil if his quality requirements are met.

The designer also will tweak the segmentation of fashion’s ubiquitous pyramid, usually divided into three categories — basics at the base, bridge in the middle and luxe at the tip. Instead, Menichetti will combine the three parts into one collection. “People today dress by mixing clothes and brands as long as each one has an added value,” said Menichetti.

The overlapping retail prices reflect this take: Basics range from $20 for a cotton tank to $400 for a dyed and washed cotton shirt; handfinished luxe garments span from $80 to $2,500 for handpainted leatherwear, while the middle area or more technical items range from $40 to $1,250.

“I believe in tackling every aspect of the business seriously when the time is ripe to build something that lasts in time,” said Menichetti.

The starting point for the 150-piece women’s collection is the fabrics, developed exclusively for the designer. Menichetti starts with the tops and weaves his way through the textile chain to obtain innovative washes and treatments, such as lived-in textures and felted hands, which add body but subtract stuffiness to pinstripes, tweeds, crepes and flannels. At times, they are bonded with slinky silks or high-performing nylons and sturdy Corduras.

The color wheel spans from smoky grays and bottle greens to pewter pink and midnight blue. The collection is complemented by a vast selection of bags that run the gamut from postman totes to saddlebags, and by shoes. Silhouettes are generally small and fitted, with many handfinished blazers that display the tailoring techniques for which the designer is known and about which he can talk for hours.

The designer’s approach to the project reveals the two strongest traits of his personality. On one hand, his spiritual side — he has traveled India and Tibet high and low; has studied the meaning of signs, and has a degree in anthropology — made him move forward one small step at a time. On the other, his adventurous genes — he windsurfs and races in the Paris-Dakar motocross rally —made him decide to launch his own label and plow through a year of road shows in the U.S to seek financial backing.

“Especially if you have a global vision and if you want your company to grow and evolve, it is fundamental to have financial support,” Menichetti said.

The chemistry went off with Fisher. “There is no lack of talent [in the fashion industry], but we felt that the people here and the business plan were very compelling,” said Fisher. “Aside from his ideal background and success stories, Roberto understands complicated financial matters. He has a good business mind.”

As Menichetti said: “I want to sell my fashion and I know that there are rules and numbers to respect.”

And Menichetti is a staunch believer in both teamwork and confrontation in building his own company from the ground up. “I believe in union with individuality,” he said. “My staff is like a rugby team, where the players move forward in a line, one linked to the other. That’s how you win.”