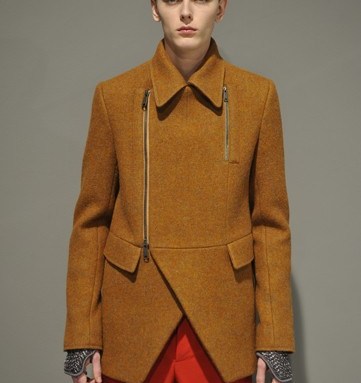 Nicolas Ghesquière’s Balenciaga woman is about to meet her match. The designer has built a fast-growing business — and editorial buzz — around the French couture brand since arriving more than a decade ago. And now he’s putting his creative muscle behind Balenciaga Man.

While the brand doesn’t have a men’s wear heritage, Ghesquière — known for sculpted silhouettes, futuristic designs and attention to detail for women — has been dabbling in men’s wear since 2004.

“Until a year ago, my approach was to limit myself to a wardrobe of timeless pieces rather than seasonal fashion statements. Now I’m thinking about a Balenciaga man who could be interested in iconic pieces and the brand,” Ghesquière told WWD in the buildup to men’s fashion week in Paris, which kicks off today. “He’s a man who has similar style points of view as the Balenciaga woman.”

Not that his arrival comes as a surprise. In October, Ghesquière sent Nick Cave’s modeling son, Jethro, down his women’s runway in a sleekly modern suit. Also last year, he opened the first men’s-only Balenciaga corner at Hankyu in Osaka, Japan. A men’s fragrance is another possibility, according to the house.

In an exclusive preview, Ghesquière described the direction he’s taking Balenciaga’s men’s business, which balances wearable pieces with architectural shapes — as in the case of a rust-colored felt jacket with industrial zippers worn with slim red cargo pants.

“Men are driven by other references,” Ghesquière said. “It’s all about quality, fabric, cut and elaboration. Construction and volume are key.”

In men’s wear, the designer sees a split between high-concept fashion and classic tailoring. “I do not understand why it should be in these two boxes,” he said. “It’s quite old to think like that. There are other types of men in between, so I try to make clothes for them. It’s all a question of balance.”

Ghesquière, who wears pieces from the collection, said he strives to “echo the freedom in design” generally allowed women’s wear and not to be constrained by his own personal aesthetic.

“He is probably one of the most organic designers,” said Tom Kalenderian, executive vice president and general merchandise manager of men’s for Barneys New York. “He only designs and produces garments that he believes in.”

Balenciaga men’s-only corners are appearing in select retail stores around the globe. In addition to Hankyu, corners recently have opened at Harvey Nichols and Shibuya Seibu Men, while Printemps department store will unveil a Balenciaga corner in March.

But for Ghesquière, the men’s business is still in its genesis. “We are just at the beginning of the process,” he said.

Balmain is expanding men’s wear with the hope that Christophe Decarnin can infuse it with the same youthful energy that has renovated its women’s business. In the summer, the label presented a capsule collection of men’s wear, but now it’s ramping up the business with a runway show. Since Decarnin arrived at Balmain a few seasons ago, he has turned the brand into a popular resource for party girls with money to burn. Now he’s out to dress their boyfriends. The brand, founded by couturier Pierre Balmain, previously offered men’s tailored clothing through licensing, but its men’s wear has not had a designer point of view for many years. “What’s important is to make clothes for the man of today,” said Decarnin, who approached the challenge according to his own needs, and he doesn’t need fickle fashion. “It’s not a collection — it’s a wardrobe for men, and each season I add a few more pieces. The clothes are very real clothes, things that I can’t find for myself.” They include basics like jeans and leather blousons, interpreted the Decarnin way. “There is more restraint on creation in men’s wear, but that is what’s interesting about it — it’s about finding the right proportions,” he said. The men’s pieces from the original capsule collection were picked up by stores including Printemps, Colette, Maxfield and Jeffrey. — E.M. and Jean Scheidnes

Kim Jones may have chosen the City of Light to unveil his debut collection for men’s wear traditionalist Dunhill, but the English designer plans to keep the brand decidedly British.

“Dunhill has fantastic British heritage, and it will stay that way,” said Jones, who was named British men’s wear designer of the year in 2006.

After spells at Alexander McQueen, Mulberry, Hugo Boss, Umbro and Louis Vuitton, Jones’ appointment at Dunhill in 2008 surprised the industry. The designer was best known for his youth-oriented and street-influenced namesake collection, which he started in 2003, and for his collaborations with soccer brand Umbro.

The century-old tailored-clothing label, owned by Compagnie Financière Richemont, was founded by Alfred Dunhill in 1893. Chief executive officer Chris Colfer explained Jones’ brief was to develop a coherent direction across categories and to shake up the brand’s stuffy image.

“Jones is well-known for his casual style, but he has a quite formal understanding and a lot of exposure to tailoring, cut and shape….He brings a fresh eye to the brand,” Colfer said.

“Alfred Dunhill was such a modern man in his day, he would always look to push the technical aspects of the brand in every direction,” Jones said. “I liked that idea of pushing boundaries. [For fall] I’ve focused on innovation in knitwear and tailoring, keeping it modern in terms of cutting but respecting the tradition of tailoring.”

For his upcoming collection, Jones said he dipped into the archives and revisited key pieces from the Twenties, using high-end fabrics such as Mongolian cashmere or –— on the technical side of the spectrum — Loro Piana’s Storm System in outerwear. Key pieces include a flannel three-button blazer, which fastens into a stand-up collar, a travel jacket and a sharply cut mackintosh.

Dunhill recently introduced its new lifestyle retail concept, dubbed the “Homes of Alfred Dunhill,” which was rolled out in London, Shanghai and Tokyo last year, while a fourth home will open this year in Hong Kong. The stores offer bespoke tailoring, grooming services, a Bentley chauffeur service and a selection of Dunhill products, including ready-to-wear and men’s beauty products.

Colfer said the brand would continue to develop its retail reach, eyeing units in Las Vegas, Boston, Los Angeles and China, as part of a strategy to generate more revenues in directly owned units. Dunhill also sells in department stores worldwide, which account for 35 percent of sales.

One market the brand has its eye on is America, where it has struggled in the past. “The U.S. is another China,” Colfer said. “We are underdistributed there. We plan to reenter and are pushing an expansive program.”

Uniforms don’t have to be standard, according to Paris-based, Los Angeles-bred designer Rick Owens. Far from it.

“French interior designer Jean-Michel Frank had 40 identical gray flannel suits hanging in his wardrobe. For me that’s a man who knows himself, who is confident. [There’s] something wonderfully severe and luxurious about it,” said Owens, whose personal look is always a variation on a single theme: black shorts over black sweat pants, a white T-shirt, a black overcoat — and heels.

“I suppose I’m a terrible designer because I like uniforms,” said Owens, who first launched his men’s wear label on the women’s runways in 2004. “I don’t understand how people dress if they don’t understand their own look.”

Known for a grungy-gone-glamorous aesthetic, the designer said his men’s business had increased “substantially enough to deserve its own show.” It now accounts for 25 percent of sales.

“I do like some extravagance. I go for both severe and anonymous, or pretty flamboyant without making him look like a d–k,” Owens said. “It doesn’t have to be something I would wear, but I constantly ask myself if it’s something I would feel stupid in.”

Don’t expect Antonio Marras to tone down his signature potpourri of patterns, patchworks and lush embellishments for the Kenzo man.

Marras, whose creative brief at Kenzo was extended last fall to include men’s wear as well as accessories, will present his first men’s collection for the house on Saturday, and it won’t be for the shy guy.

“It’s for a man of strong convictions, with a touch of poetic idealism,” Marras said. “He is not afraid of having his own style and a different conception of elegance.”

Marras, who presented his debut men’s collection for his eponymous label in 1999, is Kenzo’s first headlining men’s designer in nearly a decade. Since Roy Krejberg left the brand in 2001, Kenzo men’s wear, which represents 40 percent of sales according to Marras, has been in the hands of the label’s in-house design studio.

For fall, Marras revisited a Kenzo theme from its runway in the Seventies, including a somber color palette for added “dramatic impact” and a jacket with twisted prints, resembling a collage.

“Men’s wear is stimulating for a designer because you have to work on a very subtle line between what is desirable and what is wearable,” Marras said.

He joins a number of women’s designers at brands owned by LVMH Moët Hennessy Louis Vuitton — such as Riccardo Tisci, creative director at Givenchy, and Stuart Vevers, Loewe’s chief creative — who have been handed the men’s wear creative reins recently. Tisci and Vevers presented their debut men’s collections last June.

Adam Kimmel’s first Paris presentation will show off his art-world bona fides: The designer will display his fall collection in the trendy Galerie Thaddaeus Ropac alongside works by the photographer and poet Gerard Malanga. Kimmel has always been inspired by his artist friends, and his workwear-inflected collections make reference to various art scenes. For fall, he looked to the late Sixties in New York, specifically the work of Malanga, who was closely associated with Andy Warhol. His artist friends typically model for his look book, which his brother, photographer Alexei Hay, generally shoots. (The shoots therefore have a reputation for being exclusive art-world happenings.) This season Malanga shot the look book. His photos, as well as a video installation he made that also features the clothes, will be exhibited tonight [FOLO], together with Kimmel’s mannequins. The collection makes subtle references to the Malanga-Warhol era with jeans, flannels, tweeds and corduroys, in greens, grays, black and navy. And Kimmel will dress Malanga, naturally. “It’s always been a goal to dress my heroes or incorporate them into my work,” the designer said. Kimmel has had only one other presentation, which was a year ago, when he was the featured designer of Pitti Uomo in Florence. — Jean Scheidnes