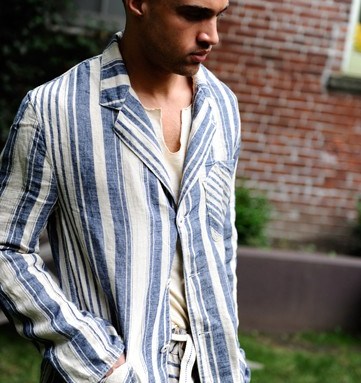 New chief executive officer Scott Morrison has set out to transform Evisu from an also-ran in the U.S. premium denim market to a competitive player. At Project, buyers will get a look at the brand’s new approach to denim, which focuses on authentic washes, new fits and a minimization of Evisu’s rear-pocket seagull logo. “We are showing an entirely new denim collection and I think people are going to see Evisu in a new light,” said Morrison, who took the top job in May. “What happened in the Nineties was that Evisu became more of a streetwear brand that was very dependent on our seagull logo. People were buying it for the logo rather than the product.” The changes reflect Morrison’s aesthetic at the two previous brands he oversaw, Earnest Sewn and Paper Denim & Cloth, both of which emphasized heritage denim looks and low-key branding that appealed to contemporary customers. For spring, Evisu has revamped its fits to embrace a more contemporary attitude and the seagull logo on the back pockets has been made thinner and faded out. “The logo is now extremely subtle or even completely removed,” Morrison said. All of the Evisu product is made from selvedge denim, and retails from around $200 to $395. There is a younger, lower-priced line called Evisue Genes that Morrison is not showing in New York, but will be at Project Las Vegas in September. Evisu rings up less than $4 million in sales in the U.S., with the bulk of its business coming from Europe and Japan. (Two separate companies operate the Japan and non-Japan businesses, with Morrison ceo of the latter.) Morrison has tapped Jamee King, formerly of Diesel, as vice president of sales at Evisu to help drive growth of the brand here.

Marc Ecko originally planned to launch Marc Ecko RX last season — the RX stands for “prescription,” an homage to Ecko’s short-lived time as a pharmacy student — but pushed things back to spring ’10 after revamping the concept. The new strategy has lowered price points, narrowed the number of styles and moved production from Italy to Asia. “The marketplace clearly reacted to certain classifications,” Ecko said. “The feedback steered us into a more focused path.” Ecko’s company is undergoing a financial restructuring and has sold its Avirex and Marc Ecko watch divisions to pay off debt. While the previous plan had RX produced by classic Italian clothing maker Montezemolo with tailored jackets selling for $650 and cashmere sweaters for $530, the new concept is aiming for more accessible product in line with the established Marc Ecko brand. Jackets will retail for $158 to $218; hoodies for $98; polos for $54; wovens for $64 to $84; shorts for $78 to $84, and T-shirts for $54 to $58. In general, Marc Ecko RX is priced about 20 to 30 percent higher than the Marc Ecko Cut & Sew line, which also targets a more mature customer than the core streetwear brand. Defining the difference between the RX and Cut & Sew labels, Ecko called the new label an extension of Cut & Sew. “Rather than its older, more serious brother, it is its artsier, more eclectic one. I’d say the colors are more clear and bright, and the styling is far more technical and active,” he said. Three styles of T-shirts, dubbed Golden Prescription T-shirts, will come with a ticket for a chance to win Ecko’s original artwork on the T-shirt.

Founded in Japan in 1961 by Yoshida Kaban, Porter bags began retailing in the U.S. last year. Made in Japan and known for functional design and durability, Porter offers luggage, shoulder bags, messenger bags, totes and wallets fashioned from organic fabrics, leather and high-performance materials. Porter bags, which retail from $200 to $300, are sold at Barneys New York, Saks Fifth Avenue, Bloomingdale’s, Opening Ceremony and AG Adriano Goldschmied, among other specialty doors. The line is sold out of New York’s Steven Alan showroom, which picked it up as an account this month, after also selling in Steven Alan stores. “The designs are very masculine and practical and the quality is amazing,” said Lynn Rosetti, showroom director at Steven Alan. “You can pack your entire life into one of their bags, and it never rips or tears.” Among Porter’s signature collections are the Porter Tanker, made from nylon satin fabric; the Porter Smoky, made from Cordura Duck material and the Porter Drive, made from nylon twill. Porter has become an under-the-radar favorite in fashion circles, and the brand has collaborated on special edition products with partners such as A.P.C., Neil Barrett, Oliver Peoples, Levi’s, Carhartt and Wallpaper magazine.

“Urban Zen” is the underlying aesthetic at Luke Simon, a new men’s brand launching for spring ’10 that emphasizes relaxed silhouettes and soft cottons — all with a stylish, contemporary appeal. “Everything has a very soft hand and an easy feel to it,” said Peter Trainor, who designs the line for company founders Lucas and Simon Cittone. “Ninety percent of the line is made from Japanese fabrics, and there’s a lot of attention to detail, from the stitching to original artwork on the T-shirts.” British-born Trainor is an alumnus of Raffi, where he designed the upscale RS by Raffi Shaya collection, and for which he still consults. He was recruited by the Cittones, a father and son who previously were in the computer business. “Lucas, the son, always had an interest in fashion and wanted to start his own line,” Trainor said. Also part of the launch team is Michael Ryan, owner of the New York-based Blue Agency showroom, which is selling the line, and Mark Humphrey, founder of Los Angeles-based Humphrey Creative, a branding agency. Luke Simon produces most of the line in Turkey. Shirts are priced to retail at $135 to $185, jackets at $395, pants at $165, and knits at $85 to $195. Slub cotton T-shirts, striped drawstring shorts, engineer-seamed jackets, and henleys with raw-edged necklines embody the casual attitude of the collection. Apart from the U.S., Luke Simon has also closed distribution
agreements and signed showrooms in London, Berlin and Milan. “We really wanted to make sure that we have a global point of view, and from a financial point of view, we think it’s important to have that global reach, because of the U.S. economy,” Trainor said. Trainor emphasized that Luke Simon is “very well-funded” and some of those resources will go into cosponsoring Project’s opening night party at the Maritime Hotel on Monday.