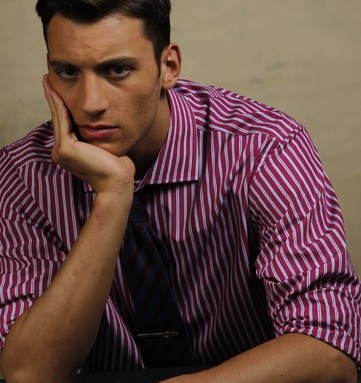 The flight to basic styles and safe replenishment programs is finally reversing in the dress shirt market, where major brands are seeing an uptick in fashion colors, bold stripes and statement patterns for fall.

Just a year ago, the conservative category of dress shirts was in an especially ultraconservative moment. Style became synonymous with commodity, as buyers invested in solid white and blue, simple patterns and stock programs with the hope that the classics would best lure value-obsessed customers.

And even though the dress shirt market continues to post year-over-year declines, the thinking has changed: according to most vendors, the consumer is ready for more fun and risk when it comes to shirts.

“Fashion in general is cyclical, but this particular cycle is being driven by economics,” said Mitch Lechner, president of the dress shirt division of Phillips-Van Heusen. “People are feeling better about where we are economically. They start to feel safer and then they become more receptive to fashion.”

That means nonbasic colors — like lavender, green and red; fancy patterns like multistripes, and nonwhite grounds will make up a larger statement on the department store floor come fall. Lechner said fashion product will be up 15 percent across the board next season, as value brands like Arrow and contemporary players like Elie Tahari broaden their assortment. And at more style-oriented brands like Calvin Klein, fashion styles will account for more than 50 percent of stockkeeping units. Fashion is even driving merchandising at value stores like Sears, where trend tables will hit the floor come holiday.

The move to inject more interest into the shirt department comes as the market continues to struggle. Dress shirt sales tumbled 17 percent to $2 billion in the 12-month period ending February 2010, according to The NPD Group. Men’s apparel overall fell 5 percent during the same period.

But vendors across the board said fashion product should help drive sales and a strong season next fall. “There’s more optimism now. Foot traffic still isn’t great, but people are buying multiple units, which they weren’t doing before,” said Giles Preston, vice president of sales at Robert Talbott, which is addressing the demand for more fashion styles by adding fancy patterns to its stock program.

At the department store, bold stripes in particular are heralding the return to a more diverse and fashion-conscious shirt assortment. Staid bengal stripes on white grounds, the unofficial pattern of the recession, have given way to thicker bands, brighter colors (often in groups of three) and tonal or blue grounds.

“We had a shift to white for a while. It was a palate cleanser,” said Trudi Roach, vice president of design and merchandising for Smart Apparel. “Now there’s more interest on the floor, and it’s predominantly in stripes,” citing blue-purple and blue-tan programs in the company’s Nautica license.

Thomas Pink is also showing various kinds of stripes in its fall lineup, including bolder colors on nonwhite grounds, and has a refreshed palate of dark, jewel-tone solids on offer.

Poplin and oxford cloth are also yielding to lightly textured shirts. Small-scale dobby, twill and herringbone weaves — allowed by the development of compact yarns — are key looks for Boss Black and Gitman Shirts next fall. “They make beautiful striped shirts that are still lightweight and don’t give a gross surface effect,” said Gitman president John Minahan. “It creates more options. Guys are tired of seeing just white and blue.”