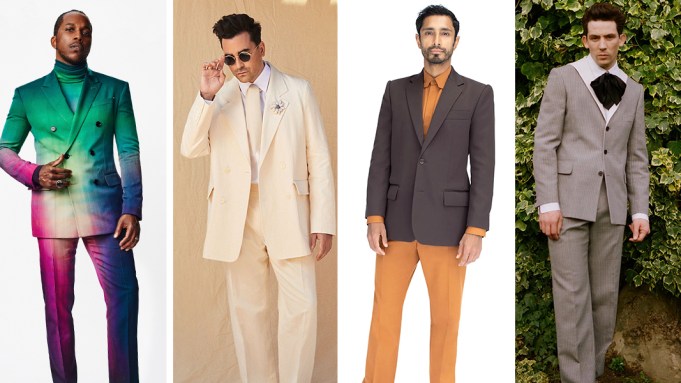 This year’s awards season is unlike any other in years past, with celebrities tuning in remotely and the traditional red carpet taking on a new form due to the pandemic. Despite the disruption and virtual format, the last two months of awards shows have produced a surprisingly wide range of high-fashion moments, especially among the male celebrities.

Unlike in previous years when many male nominees stuck to the traditional tuxedo, this season has seen several men go bolder with their looks, choosing bright colors, modern fits and more couture-inspired design elements for the virtual awards shows.

“The rules of red carpet dressing, they’re all being rewritten, and brands are taking chances,” said fashion stylist Avo Yermagyan, who has styled Leslie Odom Jr., Oscar best supporting actor nominee for his portrayal of Sam Cooke in Regina King’s “One Night in Miami,” in an array of standout looks this awards season. “I think they’re moving away from their regular formula and standard procedures because there is no standard anymore.”

Through Yermagyan’s styling, Odom Jr. is among a crop of male nominees, including John Boyega, Daniel Kaluuya, Dan Levy, Josh O’Connor, Riz Ahmed, Sacha Baron Cohen and others, that have stood out on the virtual red carpet for their high-fashion style. He has worn couture and ready-to-wear looks from design houses like Valentino, Celine, Berluti and Versace, among others.

“I think men are becoming fearless when it comes to dressing,” Yermagyan continued. “They’re taking so many bigger chances and they’re embracing the concept of gender fluid dressing.”

When styling Odom Jr.’s awards show looks, Yermagyan looked to the actor’s past characters for inspiration. The actor started off awards season at the Golden Globes wearing a chocolate brown trompe l’oeil print suit, a poplin oversize shirt and neon green viscose cady turtleneck from Valentino’s spring 2021 couture collection — designer Pierpaolo Piccioli’s first couture collection to include men’s wear — that gave a nod to the actor’s “One Night in Miami” character with its 1960s vibe. Yermagyan later dressed Odom Jr. for the Critics’ Choice Awards in a Celine fall 2021 pinstripe suit paired with a ruffled white collar, which was inspired by the actor’s “Hamilton” character, Aaron Burr.

This idea of storytelling through clothes was one shared by other fashion stylists this awards season, including Julie Ragolia, who styles first-time Oscar nominees Riz Ahmed and LaKeith Stanfield.

“These kinds of awards situations are an opportunity to tell stories about who [the celebrities] are and how they think,” Ragolia said during a Zoom call from Milan. “It’s like the clothes are part of that, so in that sense it’s quite fun because it becomes almost like an extension of a documentary narrative.”

Ragolia has worked with Louis Vuitton men’s wear designer Virgil Abloh to create custom looks for both actors, with Stanfield wearing a brown marble print suit at the Critics’ Choice Awards and Riz Ahmed sporting a color-blocked brown and orange suit at the SAG Awards. Ragolia worked closely with both actors on their looks to celebrate their milestone nominations, especially for Ahmed, who is the first Muslim to be nominated for an Oscar in the best actor category.

“It’s a nice opportunity with both of them to really tell a larger story of who they are and to work so closely with brands is really such a pleasure,” she said. “To have these deeper conversations with designers and brands in the choices that we make, it’s been really special. The thing to expect from them is that [their looks] are very much reflective of who they are as people, what they stand for and what their beliefs are.”

Ragolia said the Louis Vuitton looks reflect both actors’ laidback styles, given that neither of them regularly wear traditional tuxedos or bow ties and have historically gone with bolder looks for their red carpet appearances.

Another important aspect contributing to these nominees’ looks is the element of celebration. After over a year of isolation and continued restrictions on large gatherings, these stylists are using awards season to give viewers a respite from the ongoing pandemic.

“After a year of [the pandemic], people are exhausted and they want the glamour and they want the escapism,” said Ilaria Urbinati — fashion stylist and cofounder of men’s lifestyle website, Leo — who styles Sacha Baron Cohen. “It’s always been the job of entertainers to entertain and distract and give people escapism. I think that now is a good time to do that. Everybody was also just eager to get dressed up because they want to get out of their sweatpants, but also the styling and fashion and the red carpet, it’s supposed to be aspirational. I think going over the top is almost like overcompensating for the year in sweats.”

Sarah Edmiston, who along with styling partner Zadrian Smith styled “One Night in Miami” actor Kingsley Ben-Adir in a custom Dior Men suit at the BAFTAs, echoed Urbinati’s sentiment on dressing up during the pandemic.

“The red carpet and awards dressing feels more like a celebration of life and a celebration back to parts of life we missed, which are getting together, making an event of something, hugging and saying you look amazing,” Edmiston said during a Zoom call from London. “It’s about celebrating your achievements and celebrating the work you’ve done. Everyone is excited to get together and have something to celebrate and make a fuss of. That’s really needed right now.”

This type of “escapism” fashion has been a theme throughout the pandemic, with “Zoom dressing” and virtual party clothes popping up as early trends. Many celebrities have taken these quarantine fashion trends up a notch with their awards show looks, including Odom Jr., who wore a multicolored Berluti suit at the SAG Awards; Harry Styles, who accepted his Grammy for Best Pop Solo Performance in head-to-toe Gucci topped with a feather boa and Kaluuya, who took the pandemic’s fashionable pajamas trend head on in a purple Louis Vuitton loungewear look at the SAG Awards.

The awards shows’ virtual format has posed some challenges for stylists — like Urbinati, who is styling Baron Cohen virtually while he’s in Australia — but many have embraced how the new format has transformed the red carpet. Without the traditional red carpet, stylists and celebrities have documented their looks through at-home or professional photoshoots, giving their images a more editorial feel that’s not usually seen on the physical red carpet.

“For me coming from the editorial side, it’s fun because the images that come with the red carpet looks are actually more like an editorial,” Ragolia said. “We’re doing photoshoots with photographers or their partners shooting them and it’s like we’re creative directing little stories around [the looks].”

Smith said the new red carpet format also means stylists have to consider a celebrity’s setting when styling their looks.

While the red carpet is expected to return at the upcoming Oscars and for next year’s awards season, the fashion stylists believe that this phenomenon of men’s high-fashion awards dressing will remain going forward, and is an indicator of where men’s fashion trends in general are going.

“The red carpet is just a reflection of real life,” Yermagyan said. “Men are bolder in the streets, businessmen are bolder, your average 16-year-old kid is bolder. Instead of trying to fit in with their friends, their purchases show how they’re trying to set themselves apart. Individuality and diversity are being celebrated and embraced by men more than ever before.”

“We’re kind of in this more creative place for the long haul in men’s wear,” she said. “From a fashion perspective, the pandemic showed us that the rules are out the window. Once you have everybody wearing tie-dyed sweats all over the place, the whole seriousness about fashion also goes out the window, meaning people feel empowered to have fun with their style and not take it too seriously.”

The stylists stayed mum on what their male clients are wearing at this Sunday’s Oscars, but if the last few awards shows were any indication, the red carpet is sure to be full of more standout, high-fashion looks.