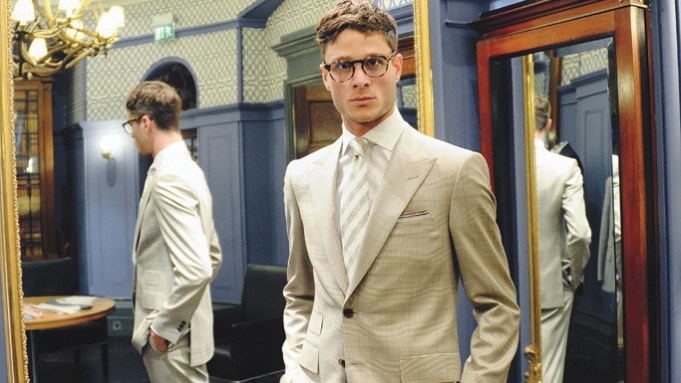 Designers showing at London Collections: Men this season were inspired by everything from World War II military uniforms to U.K. heroes such as James Bond.

“This is the season of the modern gentleman explorer, the adventurer — he could be anywhere, from Africa to the French Riviera by way of the Grand European Tour of the 18th century. Our premises were once part of the Royal Geographical Society, and to draw upon this heritage is a remarkable privilege. What we have created is very elegant — a pared-down collection of cool colors — off-whites, creams and pastels. It is about how to live and dress in tailoring that is modern.”

“I was interested in exploring the idea of Botanitech — mixing the organic and the natural with the synthetic and the technical.”

“Nearly all Spencer Hart collections are influenced by music. This season is the result of listening to a lot of funk — especially James Brown and Parliament-Funkadelic. Listening to the music in my studio drives rhythm through what I am creating, though this collection is much more purist and uncommercial, finding where the brand really comes from — it has been more about what I wanted to do. I am also in collaboration with Mercedes-Benz in designing a unique, custom-built car, which I feel has informed my designs this season; very understated but very powerful.”

“This season is very arid — hot, sandy and utilitarian. It was inspired partly by the desert operations conducted during World War II, in which functionality was paramount. However, there was also an element of fun — the desert Land Rovers were a dusty pink! Our collection is similar; functional yet irreverent. Every feature has been considered — texture, layering, fabrics — each piece has been deconstructed and reworked.”

“We are bringing it straight from the rabbit hutches of Leith, [Scotland,] courtesy of Irvine Welsh’s ‘Marabou Stork Nightmares.’”

“Spring/summer 2014 will be another step forward for us, beyond the formalwear specialty we have established. The season will see softer tailoring and a more casual feel about the range; deconstructed blazers, polo shirts, intarsia knits and the addition of products including shirt jackets and blousons.”

“Looking through our archives, we unearthed a working relationship between Hardy and Saul Bass in the Sixties, including an advertising campaign designed by Bass for Hardy’s range of scents and also his take on the ‘HA’ monogram. This led to a color palette inspired by Bass’ film artwork; specifically the poster he designed for “The Man With the Golden Arm,” and the opening sequence for Hitchcock’s “Psycho,” which directly influences the stripes within the collection. Broken stripes appear on exclusively developed U.K. woven fabrics used on unstructured tailoring and heavier canvases for outerwear. The highlights of fiery red, cyan blue and teal run through the collection, accenting our customary French navy, military green and bone color palette.”

“This season I looked at the theme of ‘sundown’ — I wanted to do something based around holidays, and that point in the day where one sits down, has a drink and considers how to spend the rest of the evening. It is a moment of absolute relaxation and yet anticipation — a simple concept, but a happy one. The use of bright cocktail colors inspires memories of holidays gone by, but it is refreshed through the quality of fabric. The suits are actually made from shirting linen. Two years ago, this would have been impossible, but changes in technology have allowed us to create suits which are almost weightless.”

“For SS 2014, we explored modern Japanese minimalism and French workwear. There is also a nod to Nineties sportswear and, of course, military.”

“I have been looking at the minimal 1977 portraits by Pietro Mattioli of young patrons of Club Hey in Zurich. The collection is a precise celebration of DIY glamour, modern androgyny and the outsider’s ‘beautiful ugliness’ to establish a new standard of normal. My favorite pieces are the Linder Sterling collage prints.”

“I was thinking about a period in my life which I was kind of embarrassed of — leaving school and going to clubs in town, in the wake of Cream and the super club, later Nineties when the grunginess had gone and people were setting up ‘clubwear’ labels. It’s such a specific period of time and a very certain look, I wanted to explore that for SS ’14, the opposite of tasteful, luxury fashion.”

“I am drawn to the idea of a richer men’s tailored wardrobe, like that of late 18th century, an idea that resurfaces repeatedly over time, most recently and dazzlingly in London in the late 1960s. Complex woven wools, intricate brightly colored jacquards, printed silks. Man as strutting bird of paradise.”

“Our inspiration this season is the former racing car driver, Francois Cevert. He was the protégée of racing legend Sir Jackie Stewart, who looked on him almost as a son, and after Cevert’s untimely death in 1973, Stewart never raced again. Cevert had trained as a classical pianist, but it is particularly his racing career that we took as our influence for the collection — especially through our color scheme, which closely mirrors that of Cevert’s racing colors; red, yellow and blue — what we are calling Cevert Blue. He was racing in a time when the drivers were gentlemen, when to drive was a true skill.”

NEXT: Pringle of Scotland >>

“Traditional tartan is explored through varying treatments and scales, including a pleating effect with the tartan in three-dimensional relief to create looks that are fresh and current, but take their starting point from the brand’s past.”

“My inspiration this season has been the past heroes of the Fifties and Sixties — James Bond, “The Thomas Crown Affair,” the South of France. Colorblocking is important for us this season, and we have used a lot more color, with brightly colored shirts, trousers and even raincoats in yellows, reds and pinks. There is less emphasis on “sportswear” — but of course, the Breton stripe is always an easy classic for us, as are polka dots.”