A new generation of emerging designers is injecting a sporty, youthful energy into the American fashion arena. 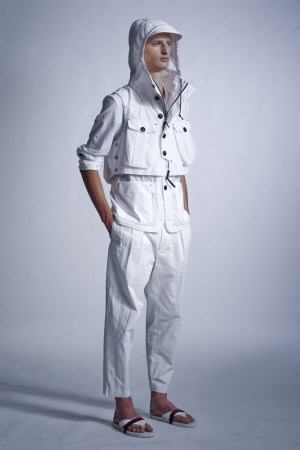 A new class of young designers is laying down roots and establishing labels in the men’s market. Among the more promising newcomers is Fingers Crossed, founded and designed by Ryu Hayama, with a spring look shown here. Born and raised in Tokyo, he studied mechanical engineering at prestigious Waseda University, but then moved to New York to learn men’s fashion design at FIT. He launched his label this year, targeting men who appreciate fit, details and workmanship with an American heritage aesthetic.

Personal and professional background: From Bucks County, Pa., he attended Parsons The New School for Design and graduated with a degree in the Design and Management program. Previously he worked at Opening Ceremony and Acne.

Target customer: The insiders; men, women and transgendered ages 18 to 88.

Name of the designer: Kerby Jean-Raymond

Personal and professional background: From Brooklyn, N.Y., he graduated from Hofstra University with a bachelor of business administration degree in entrepreneurship and business law. Previously he worked at Marchesa.

Target customer: 22- to 38-year-old men, or the older man who just feels 22. A guy who likes to be different but not outrageous and is searching the hashtags #nyfw, #madefw or #menswear in hopes that something new and cool will come up on their phone screen for discovery.

Name of the designers: Alonzo Ester and Alex Carapetian

Personal and professional background: Carapetian and Ester are originally from Los Angeles, where they worked as buyers, stylists and consultants in the retail industry.

Target customer: Someone that embraces their perfect imperfections and uniqueness, and appreciates those qualities in LongJourney.

Name of the designer: Jake Oliver

Market niche: Progressive, integrative men’s wear, filling a void in the men’s market that reaches the clientele that visits both sides of the store.

Target customer: The modern, confident, on-trend man with a taste for luxury and a contrarian inclination.