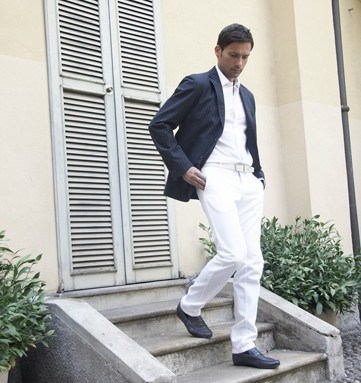 Men have long allowed themselves to be more daring when it comes to socks, so it stands to reason that Robert Graham, a brand known for bold styling, would get into the hosiery market. Enter British Apparel Collection, a hosiery expert that inked its first license through its deal Robert Graham this year. That company will be showing the brand’s debut sock collection at MRket NY. Expect to find the contrasting colors, juxtaposed patterns and general whimsy typical of the brand’s shirts — as well as Robert Graham cuff links, which British Apparel Collection also distributes. British Apparel also will be offering its standard house lines, including Punto, which stands to benefit from its expanded in-stock program; J.M. Dickens of London, which is featuring a natty range of knit ties, and Cravats of London, the company’s luxury product that specializes in printed and woven silk neckwear.

In a moment when men are gravitating to relaxed tailoring and relaxed pricing, Italian sartorial brand D’Avenza seems to have captured the mood. Its line of jackets, typified by pliable construction, seasonal light fabrics and Continental sophistication, not only has a trend-right rumpled elegance but is also priced well below other handmade garments. Retail prices for jackets start at $1,800. The brand, which launched its white label a few
years ago with a wardrobe of five one-off pieces, has become best known for its forte jacket: a belted back,
center-vested coat that U.S. sales president Bill White calls the “alternative to the classic blue blazer.” This season, D’Avenza is going deep in forte, offering the jacket in 60 different swatches. D’Avenza also will launch a new model at MRket’s New York show, the curzio, a sportswear-inspired cotton coat with bellows pockets and a tab collar.

Ever since the early Fifties when Joe Haspel wore his seersucker suit into the ocean, let it dry and wore it to a
party later that night, Haspel has been synonymous with summertime dress — or at least summertime suits.
But on the 100th anniversary of the business, the Haspel family is trying to change that. The brand, managed and owned in conjunction with Neema Clothing, inked two new licenses for dress shirts and neckwear this spring, the first fruits of which will debut at MRket NY. Haspel also will unveil its debut range of cotton tencel polo knits, which were produced in-house, and are available in both in-stock solids and seasonal designs.
In its bid to become a year-round resource, Haspel launched a suit separates program in 2008, which was picked up by regional department stores and Nordstrom. That business, which features Super 110s suits and dress trousers, will be expanded for next season as well.

The recession has smiled upon Alex Cannon, whose classically styled sportswear and moderate prices generated

solid sales at the 400 specialty stores in which it is sold. “Customers are more price-conscious and what we have found is that these stores don’t have to go on sale to sell our collection,” said owner Chandresh Mehta. The brand will continue to be a harbinger of good cheer at MRket NY with a spring collection that features relaxed weekday and weekend wear in tonal brights and neutral beach colors. Key to the collection: pima cotton polos and T-shirts in both solids and textured fancies; upgraded wovens in multihued patterns, available in both short and long sleeves, and a respectable range of novelty bottoms.

Tailoring always has been this Italian label’s calling card, and for this spring Reporter is staying on message.
The brand is pumping up the selection of its topselling travel jacket, known as the Quick jacket. The two-button coat, which retails between $495 and $575, will be available in multiple colors and spring blends including seersucker, wool, cotton, linen and silk. The brand may be best known for its jackets, but Reporter is interested in the lower half of the man as well: A redeveloped range of flat-front khakis and denim has
been designed with an American fit in mind. Reporter’s sister brand Ingram is also focusing on its core with an expanded offering of sporty cotton shirts available in 15 new washes that are also non-iron.