Influencers have selfie'd, paid partnership'd and vlogged their way onto the red carpet of fashion's Big Night Out.

The 2019 Met Gala had its largest influencer presence yet, with four influencers — James Charles, Lilly Singh, Liza Koshy and Camila Coelho — in attendance.

The highest echelon of the fashion community received four influencers at its most exclusive event this week. Camila Coelho and YouTubers James Charles and Lilly Singh made their Met Gala debuts as guests of Diane von Furstenberg and YouTube, respectively. Liza Koshy, who previously played host on the red carpet for vogue.com in 2018, also attended as YouTube’s guest.

Coelho, Charles, Singh and Koshy weren’t the first influencers to grace the Met Gala carpet — Chiara Ferragni did that back in 2015, but the number of them this year — modest, still, in comparison to their celebrity counterparts — is a definite change. It is also, perhaps, a sign of acceptance. Are influencers now a part of fashion’s elite?

As they are apt to do, the influencers documented their Met Gala experiences — though not without some controversy. In a video uploaded to his YouTube channel less than 24 hours after the event, Charles predicted there would be backlash to his presence there. Turns out, he was right. The beauty influencer was mocked for an Instagram post in which he said his invitation to the gala was “a step forward in the right direction for influencer representation in the media” and that he was excited to be a “catalyst” for that representation.

my first met gala 🥺 thank you so much @youtube for inviting me and @alexanderwangny for dressing me! 💕 being invited to such an important event like the ball is such an honor and a step forward in the right direction for influencer representation in the media and I am so excited to be a catalyst. video coming tomorrow!

“If you don’t care about influencer representation in the media then your politics are not intersectional,” wrote another Twitter user.

Charles responded to the backlash on Tuesday via Instagram Stories. “Anytime anything like this ever happens, with an influencer doing something new, people tend to be up in arms about it, but I can see why,” he said, speaking from an airplane headed to Sydney.

Charles, Singh and Koshy’s presence at the Met is part of a larger effort by YouTube to establish itself among the fashion ranks. When some designers opted out of buying tables this year, YouTube stepped up, solidifying itself among fashion’s movers and shakers while flaunting its tech company budget. And it wasn’t the only one to do so. In addition to YouTube’s chief executive officer, Susan Wojcicki, Amazon’s Jeff Bezos was photographed inside. Bezos previously cochaired the event in 2012, when Amazon began sponsoring it.

Derek Blasberg, YouTube’s head of fashion and beauty, is responsible for strengthening the platform’s stake in fashion’s more traditional, high-brow events, including the gala. And Blasberg, as a longtime contributor to fashion magazines, knows the power of the Met Gala.

“Sometimes fashion is hesitant to welcome new ideas, especially in the tech and social media space, but it has become undeniable that what these people [Charles, Singh and Koshy] are doing for fashion is incredible,” said Blasberg. Charles, he added, was “a huge hit” at this year’s Met Gala, where he was approached by Kim Kardashian, Kendall Jenner and Kylie Jenner for photo opportunities.

“Lily Rose Depp said the only person she wanted to meet at the Met Gala was James Charles,” claimed Blasberg.

Influencers are often overlooked or looked down upon by the high fashion community. In 2019, nearly every luxury house works with influencers in some capacity, but even those partnerships are often kept on the down low by brands. In spite of that, influencers have finally selfie’d, paid partnership’d and vlogged their way onto the red carpet of fashion’s Big Night Out — in couture, just like everyone else. 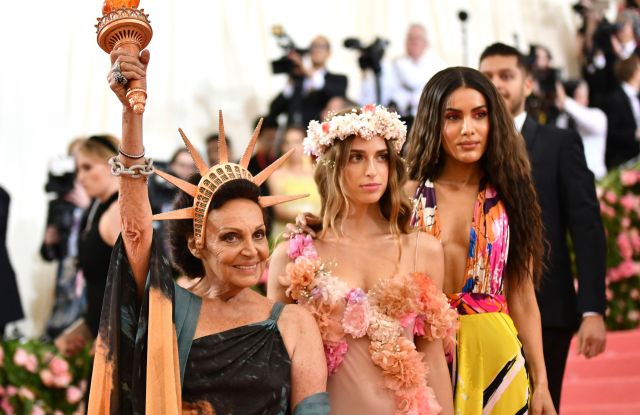 In a pre-Met Gala interview, Coelho said attending the Met Gala was a “full circle” moment.

“For years as influencers we’ve been supporting designers and brands that we love and of course they have been supporting us as well,” she said. “But this shows it’s a next step. Diane herself inviting me to embrace this night with her, be with her at her table at the Met is something very meaningful. It shows me that the industry is moving and embracing social media, which makes me so happy.”

In a separate interview, von Furstenberg declined to speak specifically about influencers.

“I don’t segment people — influencers, not influencers,” the designer said. “[Coelho is] a young girl who loves fashion and she is a big fan of DVF and she is a huge follower. I usually take people who have never been to the Met before. I took Selena Gomez for the first time and Jessica Alba. I love to do that.”

Soon, Coelho will launch a fashion label of her own — a move that is even more fitting now, given her presence at this year’s Met. “The timing is so special,” she said. “Met happening, then I’m launching my own collection. It’s coming to a full circle.”

Influencers are often praised for their followings, engagement rates and ability to raise brand awareness — though this has yet to translate to the Met Gala. According Instagram, the five most searched-for accounts on the platform Monday night were Kylie Jenner, Kim Kardashian, Kendall Jenner, Cardi B and Priyanka Chopra. The most buzzed-about designers were Gucci, Versace and Marc Jacobs, and the most buzzed-about celebrities were Lady Gaga, Harry Styles and Nicki Minaj.

The data shows that influencers have a long way to go if they want to prove their social impact at the Met (they are increasingly the buzziest accounts during fashion month). But for now, the novelty of going — as opposed to the impressions or #content — is what matters most to them. As Charles said in his one-on-one with Alexander Wang, YouTube is still a relatively new platform — one in which the majority of fashion doesn’t yet participate.

“YouTube is such a new platform in the digital space, there’s not that much respect, especially in traditional media, for YouTubers,” said Charles. “The fact that you [Alexander Wang] are willing to work with me for the Met Gala and invited me is really an honor.”