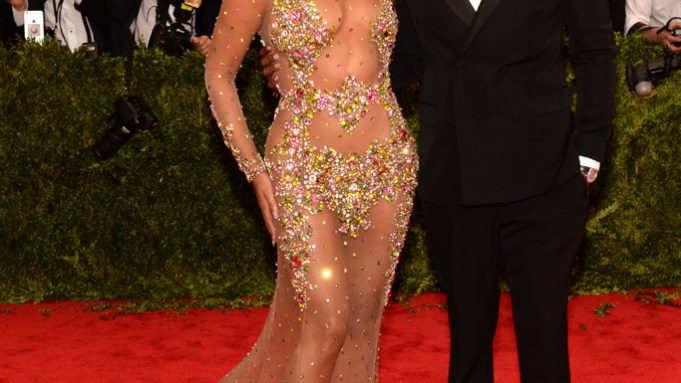 Will she be invited ever again?

Beyoncé showed up 90 minutes late to the Metropolitan Museum of Art’s Costume Institute Gala, an event cochair Anna Wintour has long run with authoritarianlike punctuality. All the other guests had long made their way up the museum’s vertiginous steps and down its winding hallways when Jay Z arrived with his wife — whose near-nude gown indicated she spent a lot of time making sure all those sequins were in just the right places. The photographers had been told she would be late, so they dutifully stayed to get the right shot.

As for the more punctual, all the red carpet talk predictably surrounded what everyone was wearing. On Monday evening, that conversation started out with a bang. Larry David ascended the staircase, waving with both hands to reporters lining either side of the carpet. When one shouted out to ask what he was wearing, he simply laughed, shrugged and answered, “I don’t know, a tuxedo?”

Fortunately, most were slightly better equipped to answer the question of the night. Michael Kors arrived alongside Kate Hudson in a metallic dress of his design. “She’s the golden girl, how can she not be in a golden dress?” he exclaimed. “We wanted something that felt like a T-shirt but with the drama of a train.”

Liya Kebede was dressed by Phillip Lim. “I’m Chinese, I got her,” he said, assuring everyone that Kebede was dressed according to this year’s exhibit, “China: Through the Looking Glass.” Jenna Lyons also followed theme in “J. Crew pajamas with a little pizzazz,” she said. Usher may have had a broken foot, but he joked that his dragon-topped cane “doubled as an opium pipe.”

For some, the drama was in the headpiece. Anne Hathaway wore a gold lamé column Ralph Lauren dress with a hood (“I kind of feel like I’m from the Deco future,” she mused), while Sarah Jessica Parker’s flaming red Philip Treacy hat was already garnering unkind comparisons on Twitter before dinner started. Diane von Furstenberg’s headgear was less complicated. “I put some feathers in my head and I think I look like a chicken,” she said.

At the top of the staircase, Katie Couric roamed, charging people with her iPhone as they approached. “I’m Periscoping you,” she shouted to Kristen Wiig. “What does that mean?” laughed an assaulted Wiig.

Also near the museum’s entrance, one Kris Jenner (in red Balmain and coiffed hair) smiled down at daughter Kendall like the proud mom she is — until said daughter was sidetracked by reporters. “She needs to come inside,” the momager mouthed to a wrangler. Jenner family friend Gigi Hadid teased the matriarch. “She’s probably going to be the chaperone,” Hadid said. “But you know, with my mom and Kris they’re not really like chaperones. They’re the ones having more fun than us.”