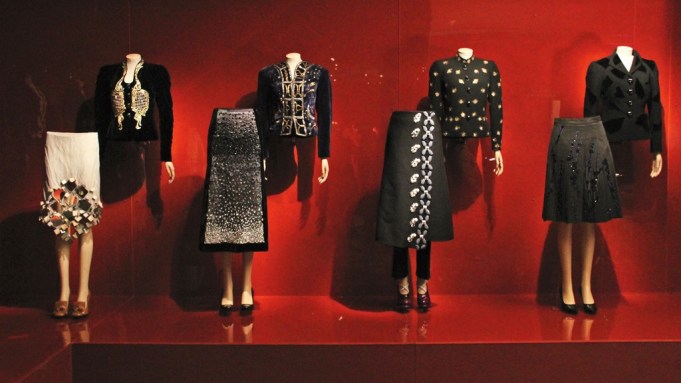 NEW YORK — That Miuccia Prada is one of the most influential designers is hardly a fashion secret, but the Costume Institute’s “Schiaparelli and Prada: Impossible Conversations,” which opens its doors to the public on Thursday, brings a new dimension to the notion.

With the designer’s help (and that of film director Baz Luhrmann), the Costume Institute is making the impossible possible: a meeting between the two strong Italian women. Videos of Prada herself and Elsa Schiaparelli, played by Australian actress Judy Davis — sitting at the heads of an ornate black table with a glass of Prosecco each and in lively conversation — are used as a backdrop in the exhibition at The Metropolitan Museum of Art. They don’t just bring to life a fictitious version of Schiaparelli, who died in 1973. They also insert Prada (the person) directly into the exhibition’s narrative — quite a feat considering her reticence to discuss fashion, because, as she put it in the opening clip, it’s either “ridiculous or supertechnical.”

More fascinating than these conversations, however, is the subliminal “conversation” between the garments that takes place at the four galleries.

Prada’s main oeuvre spans two decades, and many of the garments on display come from recent collections, including fall looks that have yet to reach stores. To that end, curators Harold Koda and Andrew Bolton’s challenge was to find ways to differentiate the displays from window installations on Madison Avenue or Via Montenapoleone.

Enter Schiaparelli. Even though she never inspired Prada, Koda and Bolton tapped into an unexpected kinship between the two, from Schiaparelli’s literal use of baroque concepts and Prada’s tropical take featuring bananas and monkeys, to Prada’s famous lipstick-print skirt teamed with Schiaparelli’s matchstick-motif dress.

Shown adjacent like this, the impact is powerful: Prada manages to make Schiaparelli’s work seem contemporary, while Schiaparelli’s brings Prada into a context of fashion and design history, removed from the world of commerce.

“These women could be in the same room today, yet there’s not a relationship,” Koda said during an exclusive walkthrough on Friday. “And that’s what’s been fun about this show: seeing these connections.”

After the first gallery introducing the first of the Luhrmann-directed videos, the second gallery — “Waist up/Waist down” — focuses on how each designer honed in on separate segments of the body, with Prada always showing a particular preference for adding detail to the skirt. (“But to me the waist up is more spiritual, more intellectual, while the waist down is more basic, more grounded,” she says in the video. “It’s about sex. It’s about making love. It’s about life. It’s about giving birth.”) Prada skirts are displayed next to Schiaparelli jackets with similar ideas, including, for instance, mirror embellishments or fantasy motifs. The idea is echoed in an accessories vitrine that graphically displays Schiaparelli hats over Prada shoes.

The third gallery is divided into multiple themes: “Hard Chic,” “Naif Chic” and “Ugly Chic” versus “The Classical Body” and “The Exotic Body.”

The exhibition ends with a series of Lucite-encased garments themed “The Surreal Body,” which touches on just that — the quirkier looks by both, such as a lip-motif skirt by Prada shown against a visual of Schiaparelli’s lamb chop-shaped hat, or a sequin Prada ensemble resembling fish scales with a projection of a Schiaparelli dress with a lobster motif.

Prada, who is a cochair at tonight’s gala with Carey Mulligan and Anna Wintour and alongside honorary chair Jeff Bezos from Amazon, herself got a preview when she stopped by the Met Thursday night. “She was concerned that the shoes were correct,” Koda said.