Wal-Mart's new contemporary line, Metro 7, marks a number of firsts for the world's largest retailer -- ones it hopes will help give its $25 billion apparel business a fashionable edge.

By Rose Apodaca and Sharon Edelson on October 11, 2005
View Slideshow 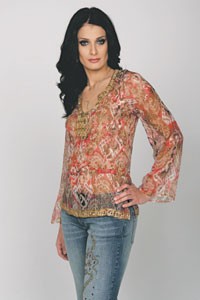 LOS ANGELES — Wal-Mart’s new contemporary line, Metro 7, marks a number of firsts for the world’s largest retailer — ones it hopes will help give its $25 billion apparel business a fashionable edge.

The main initiative is the signing of celebrity spokesmodel Dayanara Torres, a former Miss Universe. The collection also uses 100 percent silk, rayon, spandex and other techno fibers for the first time, challenging the company’s traditional price points. Tank tops normally sell for $7.94 at the store; Metro 7 tanks are $9.94. The highest price point for the brand is a $29.94 softly tailored velvet blazer with pinched pockets that is fully silk lined. For fall, outerwear will push the price threshold even higher.

Karen Stuckey, senior vice president and general merchandise manager, said stores already are reporting that Metro 7 is performing well. “We’re very pleased. We have significantly, in some areas by as much as three times, exceeded our projections. This validates our theory that there are customers in our stores looking for that kind of fashion-forward styling.”

Plus sizes are performing every bit as well, said Stuckey, adding, “the plus-size customer is every bit as interested and focused on high-style looks.”

The collection is in 500 Wal-Mart doors nationwide and bows on the company’s Web site today, as well as in another 500 units in February. A shiny silk cami, trimmed in sequin-speckled lace, retails for $9.94. There are cotton slacks with an embedded cargo pocket and colored embroidery across one leg and the back pocket for $22.94, and a crochet cap-sleeve shrug for $16.94.

“This contemporary customer doesn’t mind paying more as long as the value is there,” said an executive involved with the company producing the brand, who requested anonymity.

About 25 percent of the line consists of denim and skirts. That will increase for spring, including more novelty tops, said the executive. “Tiered skirts will continue in a new, fresh way.”

Wal-Mart executives declined to provide sales projections for Metro 7, but sources predicted sales could top $100 million within a few months.

Torres is signed on so far only for the inaugural holiday and spring rollouts. The company approached her in midsummer. “I had to see it first. I love the way it looks and feels, but the prices make it so accessible to everyone,” she said during a shoot at Miahaus Studios here. “There’s no excuse for anyone to look frumpy anymore.

“And I’m Latina. I have curves. And not everything out there fits right. But I liked that these things do. But what I love most,” noted Torres, a mother of two and an actress, as well, “is that they’re pieces you can mix and match for day or night.”

Wal-Mart had more than Torres’ curvy, albeit petite, frame in mind. A distinctly Latina model with long hair like Torres’ appears in looks on each of 16 pages of a mini photo booklet inserted in the hangtag envelope, along with an extra button.

Stuckey insisted it wasn’t Torres’ ethnicity that prompted the hire, even though a significant percentage of Wal-Mart shoppers are Latino. “The reason we chose Dayanara is we feel she personifies the face of Metro 7,” Stuckey said. “She’s approachable and influential. Beyond that, she’s in national and international fashion magazines and is a breast cancer activist. It wasn’t about her being Latin or not Latin.”

Torres may be better known to U.S. tabloid readers as the wife with two toddlers who singer Marc Anthony abandoned for Jennifer Lopez. But, in the Latino world, the Puerto Rico native, who turns 31 on Oct. 28, was already famous as a crowned beauty, actress, dancer and singer. There was even a Dayanara doll, complete with pageant sash and microphone.

When she turned over her crown in 1993 to the new Miss Universe, she visited her successor’s country, the Philippines. Torres loved it so much, she stayed. During the next four years, she mastered Tagalog, the majority language; hosted her own variety show; appeared in a how-to-dance program, and starred in a dozen movies.

Last month, Torres relocated from Miami to Los Angeles with her two sons, ages 2 and 4, to start the next phase of her life. It’s not exactly an anonymous one. She’s stopped for autographs, particularly by immigrants from Puerto Rico and the Philippines, as she strolls with her kids through The Grove, a popular outdoor shopping center near her home.

Despite a regular gig on “Access Hollywood” and increasing cameos on day- and nighttime TV, she insists she’s more interested in acting than being famous. She turned down offers to do reality shows on ABC and VH1 because of the taint of notoriety.

In November, the first Metro 7 ad will appear in Vogue, a four-page spread from the campaign shot in New York this summer that appears in stores now. (She currently appears in campaigns for a Crest children’s health program, and for the Susan G. Komen Breast Cancer Foundation.)

This fall, Torres will tour stores in New York, Chicago and Houston — “all the heavy Latino market,” she noted — as well as conduct TV and magazine interviews in Spanish and English.

In the Wal-Mart in Secaucus, N.J., Metro 7 was front and center. Six racks were flanked by displays of George, the British women’s brand that has been refocused to a more classic customer, said Stuckey.

“George — without Metro 7 — had been standing in for everything from classic to contemporary,” she said. “You’ll see a refinement process as we clarify our brand profiles. It’s a pretty massive shift in our way of going to market, and will allow us a much better dialogue with the customer. It’s a new Wal-Mart.”

The first Metro 7 designs that shoppers see are tunics and metallic sweaters, lace camis and pants with a Y-band crossover waist and another style with a sequin waistband. Deeper into the department are sequined tanks, wrap sweaters, velvet blazers, velvet skirts and tuxedo pants.

While the company is appealing to a more on-trend customer with Metro 7, Wal-Mart’s low-price marketing approach is evident in signs that read “Your Choice, $14.95” scattered throughout the department. Other brands the store carries, such as White Stag, look positively dowdy next to the new contemporary line.

Clothes are also just the start for the Metro 7 brand, which uses a simple, white satin ribbon printed with Metro 7 as its label. Footwear, accessories and jewelry are on tap for spring. One executive said “nothing is in the works for lingerie yet, but it’s a natural.”

The executive added Metro 7 could move into soft home goods, too. “The brand has a lot of potential with men, as well,” she said. “It could go cross-category and cross-gender.”