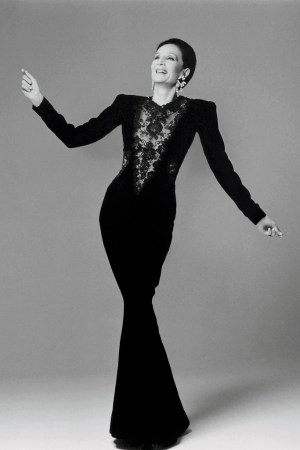 NEW YORK — Countess Jacqueline de Ribes has prepared for this fall’s Metropolitan Museum of Art exhibition in her honor with an exacting regal eye and round-the-clock work ethic.

No one knows that better than Harold Koda, the Costume Institute’s curator in charge, who has spent recent months combing through 1,000 pieces of de Ribes’ haute couture collection and her own designs. Considered by many to be the epitome of Parisian elegance — whom Valentino once dubbed “The Last Queen of Paris” — de Ribes was among the “Swans” photographed by Richard Avedon and was written about by Truman Capote. Beyond having the glacial beauty and attractiveness of a swan, “she was actually negotiating in the world, working to be in business all her life. Even when she was newly a mother, she always had a job,” Koda said.

After marrying the Vicomte Édouard de Ribes at the age of 19, she stoked her independent spirit by quietly working for Oleg Cassini and Pucci. When de Ribes first landed on Eleanor Lambert’s Best-Dressed List in 1956, she only had a handful of couture dresses, with her own designs made through a dressmaker comprising most of her wardrobe at that time. By 1962, she was inducted into the International Best-Dressed List Hall of Fame.

A muse to Yves Saint Laurent and other couture designers, who placed their drapers, cutters and fitters at her disposal, de Ribes first presented a signature collection in 1982 with a full-on endorsement from Saint Laurent. The style “icon” (a word she loathes, according to Koda) had her own label until 1995.

“She told me that part of the reason she became a designer was because she always wanted to design for herself in the way she sees herself,” Koda said.

Together they have culled 60 couture and ready-to-wear ensembles — from Giorgio Armani, Pierre Balmain, Bill Blass, Marc Bohan for the house of Dior, Roberto Cavalli, John Galliano, Madame Grès (Alix Barton), Valentino Garavani and her own label, among others — that date from 1959 through to the present. “Jacqueline de Ribes: The Art of Style” will go on view at the Costume Institute’s Anna Wintour Costume Center on Nov. 19 and run through Feb. 21.

Edgar Batista first suggested the idea for the show to Koda a decade ago, a concept that was casually seconded by Boaz Mazor. Eventually de Ribes invited Koda and Andrew Bolton to Paris to review her collection over lunch, but it took a few years for her to finally agree to a show.

But rather than present a rarified view of her life, de Ribes is more interested in relaying a realistic one. Daywear will be at a minimum; since she was a worker and not a Lady Who Lunched, her uniform of choice for day had often been blue jeans and an oversize sweater. Ballgowns include couture ones she made for the Proust Ball and the historic Beistegui Ball in Venice in 1951.

Despite such pageantry, Koda said, “Her life hasn’t been easy. She closed her own dress house because she had a terrible medical issue with her back that had her in an iron corset for three years. But despite that kind of chronic pain, she is so discriminating, so focused and such a perfectionist. She’s an absolute workaholic.”

Describing how she often worked past midnight when they were finessing the selections together in Paris, Koda said, “I told her, ‘Jacqueline, you’re like a vampire. You just work until any hour.'” (And de Ribes turns 85 on July 14.)

When an Ungaro belt appeared to be “too pearly white,” she instinctively matted it with make-up concealer and instantly made the look more cohesive.

Now de Ribes is going a bit undercover herself, having retreated for a summer break in France. Koda said: “She told me, ‘I have given the Met the past six months of my life. Now The Met will not bother me.'”