“About Time: Fashion and Duration” marks the Met Museum’s 150th anniversary and is sponsored by Louis Vuitton.

PARIS — “I have always looked to marry silhouettes, techniques, memories and impressions from the past with the latest technology to create fashion for today that speaks to the future,” said Nicolas Ghesquière, standing in front of one of the two large transparent clocks at the Musée d’Orsay in Paris.

The designer was speaking at a press conference outlining the fashion exhibition at the Metropolitan Museum of Art’s Costume Institute, opening in May. “About Time: Fashion and Duration” marks the museum’s 150th anniversary and is sponsored by Louis Vuitton, with Ghesquière co-chairing this year’s Met Gala in New York City.

As creative director of women’s wear at Vuitton, the designer has toggled between references to the past — Art Nouveau in the case of his spring 2020 collection — and his vision of the future, with one show taking place on a giant set at the Louvre Museum that brought to mind a space ship.

Ghesquière revealed that his spring 2018 collection featuring brocade frock coats, which he described as one of his most memorable for the French fashion house, contained designs that were direct interpretations of pieces he had discovered in the Costume Institute archives.

“So it’s precious to me to know that I’m always welcome to continue exploring this collection, the most important archive in the world. I’m also humbled by how the Costume Institute brings myself, other designers, as well as fashion itself, a certain glory,” he said.

“Thanks to it, our creations are transformed into valuable cultural artifacts, wearable treasures that can continue their vital stories about who we were, who we are and where we are going,” he concluded. 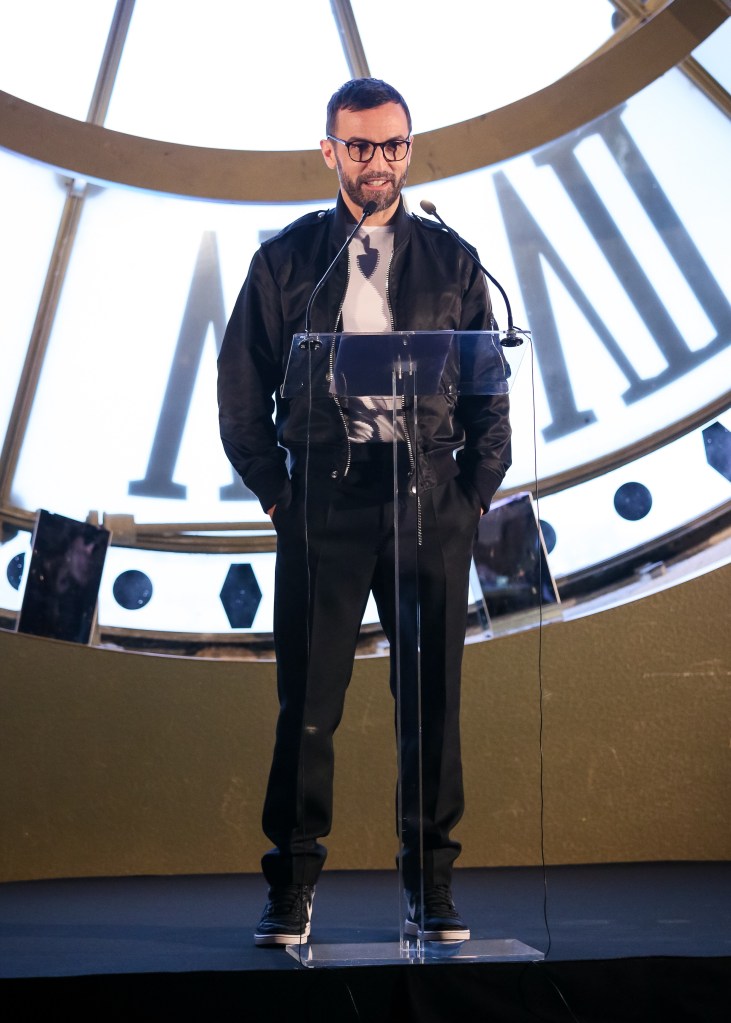 Metropolitan Museum director Max Hollein revealed the exhibition will feature 120 outfits dating from 1870, the year the museum was founded, to the present. The majority of items come from the institution’s archives, though designers are also donating looks in honor of its anniversary, he said.

Andrew Bolton, head curator of the Costume Institute, said the outfits would be shown side by side in two parallel timelines: 60 of them, all in black, will form a chronological sequence from 1870 to the present; 60 others, in black-and-white, will constitute an “alternative timeline” or “interruptions.”

“We didn’t want to present them as a straightforward masterworks exhibition, a kind of simplistic overview of styles or an expected A to Z of fashion designers. I think fashion history has moved on from this rather reductive approach, and so, too, I think, has our fashion audience,” he explained.

The show will also touch on one of the major topics impacting the fashion industry: the acceleration of production schedules in the age of social media.

“In recent years, time has dominated discussions within the fashion community. These talks have centered around the accelerated production, circulation and consumption of fashion in the digitally synchronized world of the 21st century, and unquestionably the centrality of networked information technologies has greatly impacted our experience of fashion,” Bolton said.

“While companies have benefited from this sped-up, around-the-clock temporality of digital capitalism, designers have often been creatively constrained by its 24/7 continuous functioning, so we thought it might be an opportune moment to explore the temporal character of fashion from a historical perspective,” he added.

The exhibition will be unveiled at a press preview on May 4 and will open to the public from May 7 to Sept. 7. “We still have a lot of work to do until May 4, so the clock is ticking,” Hollein said.