The week hopes to triple its size following a fall edition in which 15 emerging designers sold $45,000 worth of clothing. 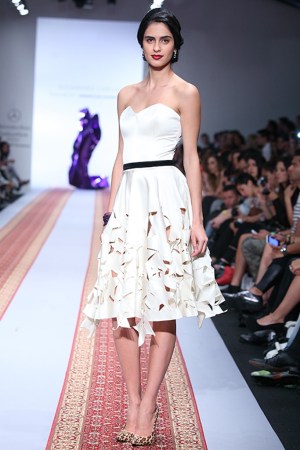 MEXICO CITY — Mexico’s fashion week hopes to triple its size following a fall edition in which 15 emerging designers sold $45,000 worth of clothing, according to general director Beatriz Calles.

At the same time, French buyer Michael Hadida said he will choose eight of 19 up-and-coming Mexican designers to travel to Paris Fashion Week to boast their latest collections, most likely in a yet-to-be-chosen showroom.

The 15 designers marketed their spring wares in the Compra Moda Nacional (“Buy Domestic Fashion”) pavilion set up as a pilot project to enable them to sell directly to the public, the first time such a strategy was used in the event.

“We wanted designers to have a chance to sell directly,” Calles said. “The plan worked so we hope to multiply its effect.”

“Designers are realizing they can now come to do business [during] fashion week, so we expect many more to register to the next pavilion, which will be enlarged,” Crespo said. He hopes the event will also attract more buyers, and not just domestic ones. Apart from Hadida, the event attracted a group of Belgian buyers, Calles noted. All said, MBFWMx is striving to draw more global buyers, particularly from Europe and Asia.

“We hope people will start to see fashion week as an event where they can do business, not just come for a few drinks,” Crespo said, adding that the platform is also working to attract new sponsors beyond key ones Mercedes-Benz, American Express and Sony.

The latest edition, held at the Campo Marte convention center in Mexico City’s Chapultepec museum and park district, drew around 30,000 visitors to watch 22 designers, including 19 Mexicans and three international ones.

Buyers highlighted Julia y Renata, Alejandro Carlin, Argentina’s Tregua, Sandra Weil and Grypho as particularly good. Favorites to go to Paris are Alejandro Carlin, Sandra Weil, Alexia Ulibarri and Simple by Trista, said Andrea Feick, a French fashion journalist who partnered with Hadida to make the selection. She said the eight winners will be revealed in a few weeks.

Sources said the designers will most likely move into a showroom and receive quality and design coaching from French fashion experts including Hadida, who owns the Tranoï trade show and a similar online version called Be to See.

“Some designers are ready for Paris but others need to improve their quality” and marketability, Feick said. “Parisians are difficult and picky. The pricing has to be impeccable or they won’t buy. The designers understand this, though.”

MBFWMx and government promotion agency Promexico teamed to bring Hadida and Feick to Mexico to select the designers.

Mexican designers already sell in France. However, Calles noted the project aims to publicize them as a selective group to make a stronger impact on the global market.

“Paris attracts buyers from all over the world,” she said. “United, we are much stronger.”

And strength will be needed. Mexico is working to build a stronger global fashion identity and industry, a feat observers say could take years unless the government bolsters industry support. That will need to increase to the level seen in other Latin American countries, notably Brazil, where the São Paulo and Rio Fashion Weeks are leading the region.

Success in Paris will be pivotal for achieving that goal, Calles said. “If we do well in Paris, we will launch similar projects in London and Hong Kong.”

Promexico and the government must dramatically increase financing for young designers, said a women’s wear buyer at a major Mexican department store, who requested anonymity.

“The fashion sector has been trying to take off for 18 years but the designers are still mainly sewing,” the buyer said. “If the government doesn’t help them, they’ll never get there.”

Promexico must also do more to bring international buyers to Mexico, the executive said.

“You have to invest to invite them or they are not going to come alone,” she noted, adding that greater support is also needed to take Mexican designers to international fairs.

Some Mexican designers, notably Julia y Renata, Alejandra Sanabria and Macario Jimenez, have managed to make a name in the international arena. However, this was mainly due to their ability to woo private funds.