Michael Bastian's first women's collection was the feminized version of his men's wear. 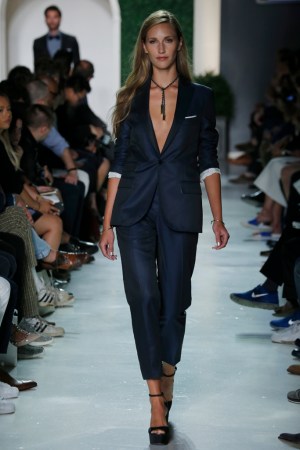 Last month Michael Bastian explained to WWD his decision to launch a women’s collection as “a nice logical extension” of his men’s collection, before invoking the proverbial void-in-the-market reasoning: “I think there’s a need for this kind of thing,” he said at the time, referring to what he would present Wednesday during New York Fashion Week: Men’s. Preppy cashmere sweaters — one emblazoned with a cupcake on the chest — a mannish white tuxedo shirt, camouflage shorts in a banana leaf print, and a pair of boot-cut jeans were among the women’s looks shown on his spring runway alongside his full men’s collection.

Filed under the show’s title “Bel Air Featuring the Sharp American,” the women’s lineup represented the slightly more feminized version of a tony, flamboyant American man. There was nothing offensive about it, but nothing especially compelling either. The question was where exactly in the extremely saturated women’s market, Bastian sees the “need” for these clothes.