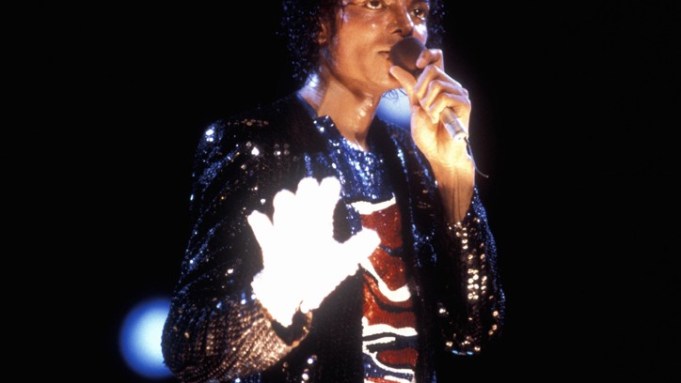 Say what you will about Michael Jackson during the last few years of his life — and with the baby-dangling-out-the-window behavior, bad plastic surgery and child molestation allegations, a lot has been said — but it takes a certain kind of star to turn a single sequined glove into a cultural symbol.

During the Eighties and into the Nineties, Jackson, who died of cardiac arrest in Los Angeles Thursday, became as much a trendsetter for fashion as he was for music. There’s the red leather motorcycle jacket he rocked in the “Beat It” video; the white ankle socks, black fedora and black loafers he wore when he moonwalked (and that walk alone is almost as legendary as Neil Armstrong’s); the military-style jacket and aviator sunglasses he toured in during the “Thriller” era; the white V-neck T-shirt that he always eventually stripped down to onstage, and finally, there was that glove, first worn during a performance of “Billie Jean” during a television special in 1983.

More than two decades later, The King of Pop’s style still inspires the fashion set. For spring 2009, Balmain sent a Jackson-esque military jacket down the runway, and it was picked up by celebrities like Beyoncé Knowles and Rihanna (trend-setting singers resetting a trend). Jackson hits like “Thriller” and “PYT (Pretty Young Thing)” are soundtrack staples for runway shows even still.

The singer was also a shopper — a big one. During the Nineties, he reportedly spent an average of $35 million a year. While making the 2003 documentary “Living With Michael Jackson,” reporter Martin Bashir saw him shell out $6 million for marble chess sets, 10-foot urns and other expensive art objects. In 2005, he blew through $150,000 at Harrods in 30 minutes. And in 2006, he went on an impromptu midnight shopping spree at Topshop’s Oxford Street flagship in London. But by that time, Jackson was hundreds of millions of dollars in debt — and looking to sell Neverland Ranch.

In April, more than 1,000 lots of memorabilia from Neverland were planned for auction, but the sale was canceled after an agreement was reached between Jackson and Julien’s Auctions. Having recently turned 50 and about to embark on yet another tour, Jackson seemed intent on making yet another fashion statement. For his “This Is It” tour, set to start July 13, the pop icon had costumes created specially for him by Crystallized Swarovski Elements. Along with the sets, the ensembles would have featured more than 300,000 crystals in 43 sizes and 27 colors. As Nadja Swarovski, vice president of international communications for Swarovski, told WWD Wednesday: “As the King of Pop, it is only natural for him to be crowned in crystal.”