Michael Kors: A Lifetime In Fashion and Still Under 30

A jacket and pants in rumpled marocain just make sense: “If you were packing a suit, and you don’t want to pack a suit.” 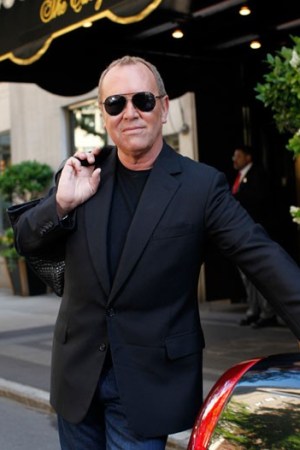 A jacket and pants in rumpled marocain just make sense: “If you were packing a suit, and you don’t want to pack a suit.”

A sportif pink sweater and long washed taffeta skirt wink toward Bill Blass, “but without the shoulder pads, pump and button earring.”

Such is the quip-rich, grounded-in-reality take of Michael Kors. The designer offered the above one-liners on Thursday morning at a casual unveiling of his terrific resort collection. It features wonderful-to-wear clothes perfect for October through December retail: cashmeres, both thick and hosiery-weight; supple, earth-toned separates; racy snakeskins; chic organics, and the occasional weather-centric extreme, both abundant lynx vest and “subtly sexy” maillot. Inclined to call this collection “destinations,” Kors, in his own words, “wussed out.” At least, he noted, “resort” is preferable to the European “cruise,” which on this side of the Atlantic means “overweight tourists in jogging suits at a buffet table.”

Next year marks Kors’ 30th year in business. On Monday evening, he will receive the CFDA’s Geoffrey Beene Lifetime Achievement Award. The designer’s grip on reality is a major reason that he has lasted — and ultimately, though not always, flourished — in this most difficult of industries. And after all these years, he’s neither too proud, too cool nor too arrogant to admit that the acknowledgment of his peers means a great deal.

Earlier this week, over breakfast at the Algonquin, Kors talked about the award, and a fast-as-lightning 29 years. Upon hearing the news, he was “first surprised, then blown away, then shocked — oh my God, is it the Middle-Aged Award? The Oleg Cassini Award? And then, at the end of the day, honored. Because it’s competitive. You’re competing for clients, you’re competing for floor space in a store, you’re competing for attention, you’re competing on the red carpet. So nothing could be a bigger compliment.”

Except perhaps development of a clientele loyal enough to have made the miserable-for-most 2009 his company’s best year ever, a fact he attributes to his firm’s corresponding retail expansion, as well as to the practicality of his aesthetic. “I think a lot of people said, ‘Wait a minute, his clothes last,’ ” Kors mused. “ ‘I don’t feel as guilty. This will work.’ ”

That approach — sensible luxe — has sometimes cast Kors on the wrong side of professional criticism; he has taken some chiding for a perceived lack of sartorial imagination. “I like something familiar and unfamiliar at the same time,” he explained, undaunted by the query. “If it’s totally unfamiliar, it’s like, ‘I have to quit my job and not talk to my friends to figure out how to wear it.’ We make the clothes that people actually live in, they hold on to.”

Thus, he makes no apologies for the intellectual accessibility of his clothes, his current resort collection a perfect example. A woman need not imagine herself somewhere else, or for that matter, someone else (read: someone younger and/or thinner), to envision slipping into something Kors. As a result, he boasts a client range from adolescent to 80-plus, the latter set including, he tossed out, as I sprinkled hot sauce on my omelet, a southern Tabasco heiress named Banana Reilly. (Though one had no reason to doubt, a quickie Google check showed the ruling Tabasco family to be named McIlhenny, likely Banana’s maiden name.)

As for the adolescent end of the range, Kors insists he knows of 11-year-olds who sport a handbag or watch, and his Berkley shoe, a not un-tough strap-and-zip number, is known in-house as “the bat mitzvah shoe.” Not that its creator approves unconditionally: “It’s too old for them, really.”

As with age, Kors swings ecumenical about sizing — zero to 16 and proud of it. “We run from Kelly Ripa to Jennifer Hudson at any size,” he said. “I’ve always thought that the right clothes do a little voodoo. Do you feel thinner? Do you therefore feel more confident? Are you comfortable and sexy at the same time? Whoever’s in your life, do they look at you and say, ‘Yeah, pretty hot’? Are your friends a little envious? It’s a lot to expect out of a blouse!”

His peace with larger sizes aside, Kors maintains the biggest difference in fashion today and when he started is “age and body” — the upward-spiraling age at which women stay interested in and still wear fashion, and the fitness focus largely responsible for that phenomenon. “Today,” he said, “mom’s got a rocking body, and she’s in the kitchen, whipping up the salad in a jog bra and a legging. She’s not like Donna Reed in the shirtdress. The game has changed.”

One thing that hasn’t changed is that for so many aspirants, fashion remains a hard-knock life. While he applauds American fashion’s current, glorious young designer moment, Kors suspects that many of its stars won’t celebrate 30 years in business. “Here’s the big question: How many of these young names are really well represented in the large stores? They buy five garments. That’s the real truth…Jack and Lazaro, they’re there. I think Alexander Wang is building a real business, breaking the rules, doing it his way, but who knows [about the future]…I think at best you can have maybe three [long-term success stories]. For some reason, there’s the magic three: Calvin, Donna, Ralph. Oscar, Geoffrey, Bill. Marc, Isaac, Michael. I don’t know why always the triptych; maybe more than that is hard for the public to absorb at a given moment.”

Kors’ own ongoing moment spans decades. His CFDA honor and upcoming anniversary offer particular occasion for reflection, and his mirror shows plenty for which to be grateful. “I know this sounds so hokey, but how fortunate am I?” he said. “Most people go to work and hate what they do. Most fashion people are in it because, absolutely, they love it. You should remind yourself, I could be selling subway tokens. This — it’s a gift.”

Perhaps so. But one that could not be more well-deserved.