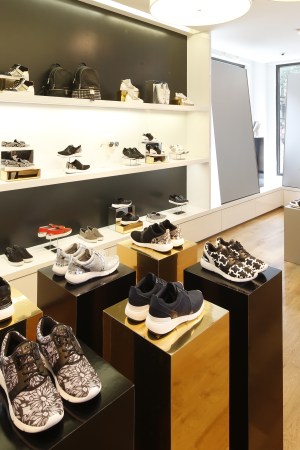 NEW YORK — Michael Kors has introduced a new retail concept at his 384 Bleecker Street location here. Formerly a Michael Michael Kors lifestyle store, the space reopened today as The Kors Edit, which the brand described as “a serialized pop up shop.”

It’s not a pop-up in the traditional sense of the term, which is defined as a temporary, usually ad-hoc retail space, as the Bleecker Street store is one of Michael Kors’ long-term retail locations, but it will be re-merchandised monthly according to theme.

Popping up first is School of Sport, an ath-leisure theme, with most of the floor devoted to sneaker displays, men’s and women’s collections and Michael Michael Kors. There is also a heavy emphasis on handbags, fur pom-pom accessories and a smattering of sporty ready-to-wear. Everything is said to have been handpicked by Kors personally.

In September, the store will be revamped to align with New York Fashion Week and on the day of the Michael Kors runway show, a selection of spring runway bags, shoes and rtw will be for sale in the store.

For October, a street-style theme will be tied to the brand’s first street-style-themed campaign, titled “The Walk,” shot by Tommy Ton. Subsequent merchandise themes are to be determined.

“Bleecker Street has long been a destination for innovation and cultural enthusiasm, so it was the perfect spot for our new ‘fashion lab,’” the designer said. “It’s really a reflection of the world we live in. I think the days of buying something and saving it for months before wearing it are gone. The truth is, our customers are going into the store looking for pieces they can wear later that day. This pop-up is a reflection of that, allowing us to choose a monthly theme that resonates with whatever is top-of-mind for our customers at any given time.”

As of now, there are no plans to roll out The Kors Edit concept to additional locations.