According to a biography written by Pick, Sir Norman Hartnell, one of Britain’s most famous couturiers, wasn’t all he appeared to be.

LONDON — Sir Norman Hartnell, one of Britain’s most famous couturiers and the man who made Queen Elizabeth II’s coronation dress, Princess Margaret’s wedding gown and a host of other designs for royals and celebrities, wasn’t all he appeared to be, according to a new biography.

In many ways, he resembled many 20th and 21st-century London designers, with their amazing talents, clients and commissions, but with little know-how — or experience — on the business side. Hartnell also harbored a few secrets that could have cost him his work with the royals in particular.

“For me, the great sadness of this story is that it was a long productive life, and he ended up with actually nothing,” said Michael Pick, the author of “Norman Hartnell: The Biography,” (Zuleika Books & Publishing).

“Other people made money, but he didn’t. They should have made him a fortune, but he never seemed to get any of it, which is a great sadness. He even lost his own house in the mid-Sixties because the bank took it. The Hartnell building [on Bruton Street] is a pretty large building. It really is a lot to keep it all going and took an awful lot of assets.”

Pick argued that the book “is not just about dresses and fashion. It’s about hard work not being enough if you don’t also have a business head and you don’t have a reliable set of people running your business for you. Anybody in business ought to really read it.”

Pick, who also penned a biography of Hartnell’s contemporary Hardy Amies, and who writes about architecture and interiors, said the designer was companionable, not to mention prolific and with a ferocious work ethic, sketching and producing 1,800 designs a year.

“He was inventive: He used to say, ‘He de-flapped the flapper,’ which meant evening dresses that were short, suddenly became long.” 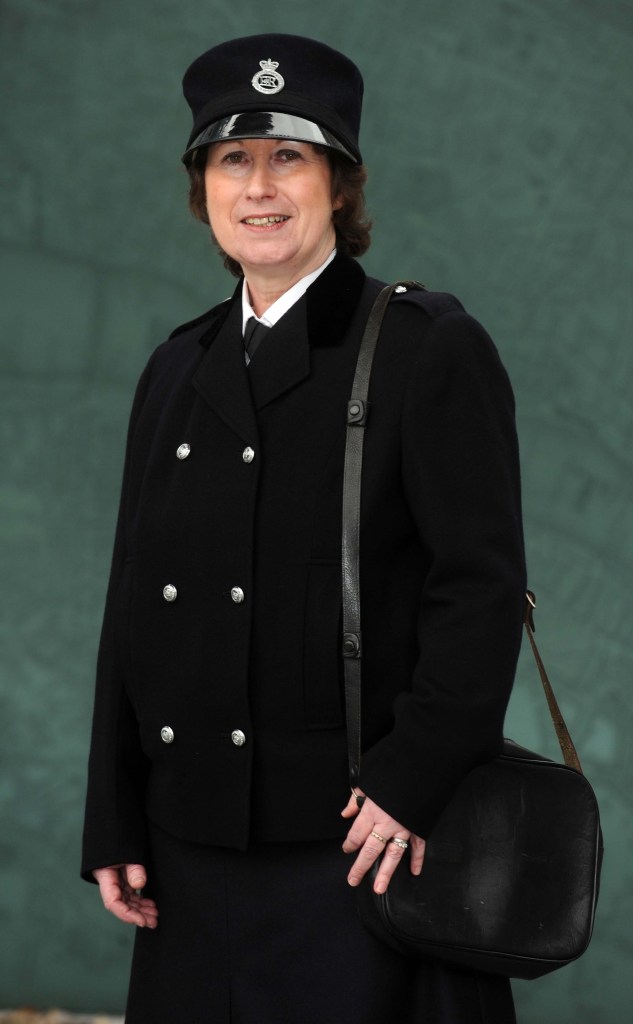 A Norman Hartnell uniform that was worn by policewomen from 1968-1972.  Murray Sanders/Shutterstock

While he made his mark designing for the royals, he also built a list of clients that included Marlene Dietrich, and worked on a many films, dressing actresses including Katharine Hepburn.

“Nobody had a bad word to say about him,” said Pick. “He was sympathetic to people. Charming, elegant with a great sense of humor and great wit.”

When creating looks for Queen Elizabeth, he would design per the instructions of her dressers, and allow the queen to pick her favorite fabrics.

“The drawings and sketches would come back with comments on them. The queen might choose different fabrics or different items to go with them. He would meet her after fittings, but it’s not as though they were great chums or anything. He was a perfectly behaved gent who made clothes for the queen,” said Pick.

How times have changed: Thirty years later, Princess Diana would become friendly with the designers she trusted and relied upon — Gianni Versace, Bruce Oldfield, Catherine Walker, David Sassoon and Victor Edelstein, to name a few — while the Duchess of Sussex remains close to her favorites, among them Clare Waight Keller, Roland Mouret, Stephen Jones and Misha Nonoo. 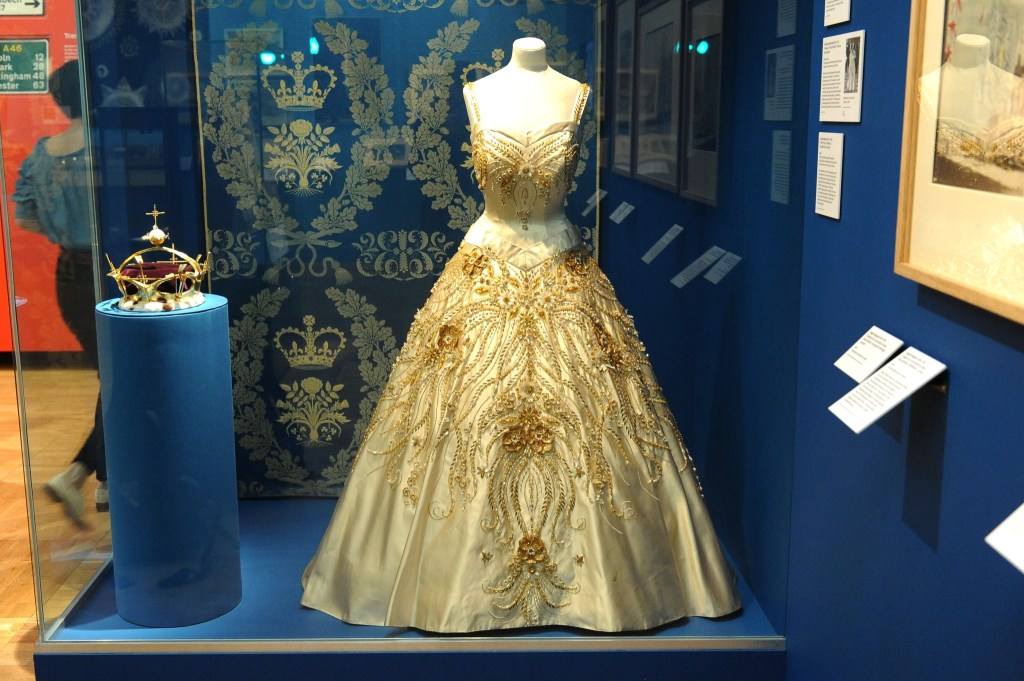 Dress for Queen Elizabeth II “Flowers of the Fields of France.”  Tony Kyriacou/Shutterstock

That democratization of fashion — and celebrities’ relationships with designers — would have been a comfort to Hartnell, who tried to keep his humble beginnings hidden as best he could.

Hartnell’s parents owned the Crown & Sceptre pub in Streatham, south London, and Pick said the designer never talked about his family in public.

“Pubs were something that ladies would never even think of going to,” said Pick. “My mother, who was born before the First World War, would never dream of going into one. Perhaps she might go to the countryside to a pub garden, but they just didn’t go to the pub. Even life in the Fifties, it was pretty much Dickensian still.”

Hartnell was so quiet about his upbringing that he backed out at the last minute when he discovered he was going to be featured on “This Is Your Life,” a program that ran in the U.K. from 1955 until 2003.

While he appeared to be the successful gentleman-couturier with a flourishing business, Hartnell’s private life was always troublesome.

At one point, he employed 550 people including his business manager, George Mitchison, with whom he was having an intimate relationship at the time.

“Everybody told [Hartnell] to get rid of him,” said Pick. “He lost directors, he lost solicitors. Finally, he lost the support of the bank because he refused to do it. His private life was bound up with his business manager’s life, and in those days, of course, being gay was difficult, to say the least.”

Pick said that if details of his private life had leaked, it would have been detrimental to his relationship with the royal family because homosexuality was illegal in the U.K. at the time.

“He lived a very precarious private life,” said Pick, adding that Hartnell had a good time, despite all of the drama.

“My conclusion is that he rather enjoyed that aspect of it. He rather enjoyed the secrecy and the fact that it was so near the edge in terms of what he was up to. I think he really got the thrill out of that.” 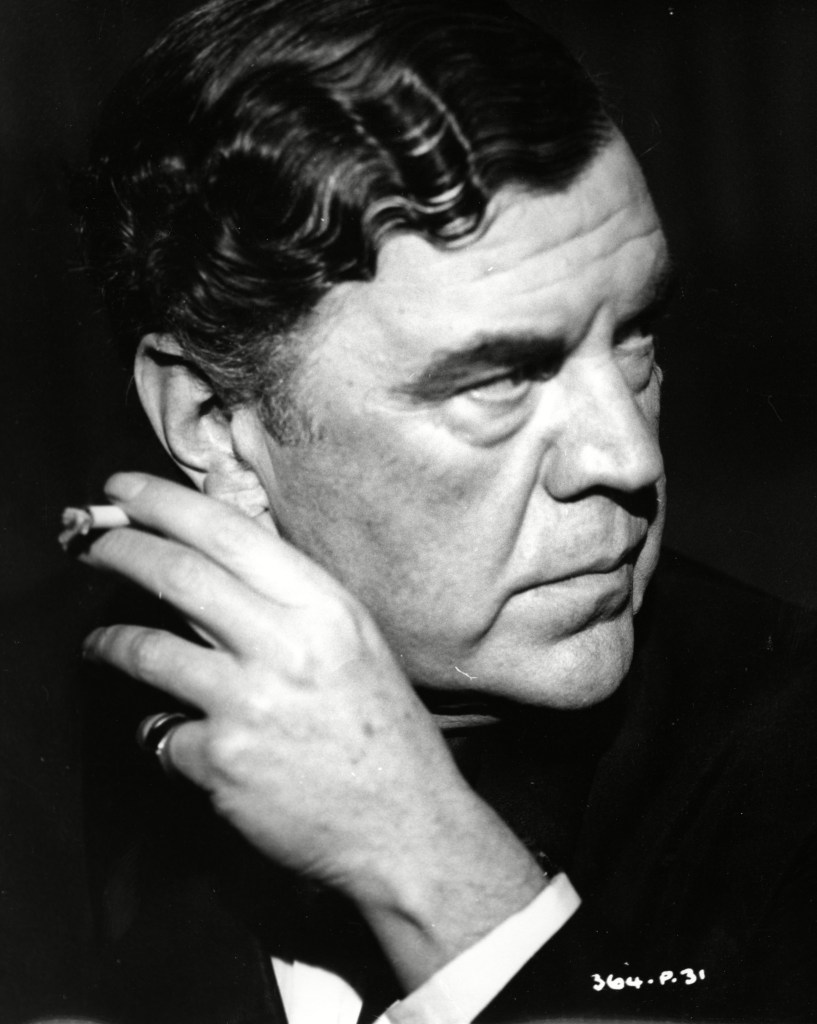 Pick includes a curious discovery in the prologue of the book. In 1948, Miss Ivy Godley, a bookkeeper at Norman Hartnell Ltd., returned to the office late one night and saw Hartnell dressed in a metallic evening dress. Seeing Hartnell dressed that way solved a mystery for Godley, who had long wondered who was placing orders for dresses with rather larger measurements. Hartnell was a cross-dresser and liked to “transform to Miss Kitty,” according to Pick.

An antiques and fine art dealer for 40 years and one of the initial founders of Twentieth Century Society, a British preservation group, Pick met and wrote about Hartnell in 1977 for The London Collections magazine. He also oversaw the renovation of the Norman Hartnell building in Mayfair, where he discovered interviews and documents that he used for the book.

Pick described the process of working on the book as “protracted,” having started his research and writing in the early Nineties. At that time the Hartnell label — and Hartnell House — were being revived under the creative direction of famed couturier Marc Bohan, formerly of Christian Dior. While Bohan’s couture and ready-to-wear under the label exhibited his signature beauty and ease, the venture failed to take off business-wise and the company closed again.

Pick looked to a poem called “The Garland” by Henry Vaughn, which he includes at the start of the book. He believes the poem sets the tone of Hartnell’s story and wants readers to take the message to heart.

“You don’t just squander your youth,” said Pick. “In terms of being successful, or good looking, or having a good time or being talented without looking to the future and laying down some sort of structure.”