One of Berlin’s most talked about up-and-comers is a young virtuoso of complicated simplicity. 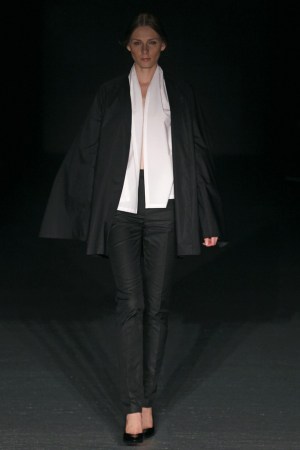 Michael Sontag is a young virtuoso of complicated simplicity. Or simple complexity. Whichever way you put it, those less adept at solving two-into-three dimensional puzzles are always left wondering just how his wafting dresses, flat-as-a-sheet coats and jackets, and rounded and gathered voluminous forms are constructed since there’s often nary a seam in sight. Instead, the fabric is draped, pulled, tucked in or doubled over to fall into clean, voluptuous folds.

The pale celery silk crepe dress, for example was a modern toga reduced to the minimum, its one panel of fabric falling from the boatneck to the hem, then pulled up around the back and, invisible to the eye, tucked to form the left armhole. Or the apricot stonewashed satin gown, this time more akin to a sensual caftan: two panels met below the V-neck, one side was then worked into a horizontal back fold.

This show also marked Sontag’s collaboration with German footwear retail giant Görtz, which should help expand the market impact of one of Berlin’s most talked about up-and-comers.