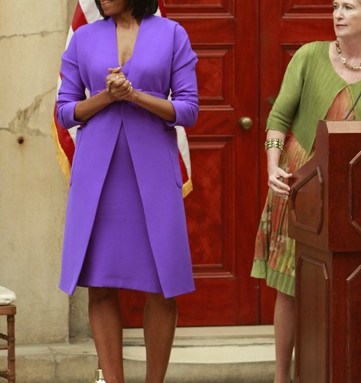 NEW YORK — Dressed in a vibrant purple pre-fall Isaac Mizrahi sheath and knee-skimming coat, Michelle Obama sliced the ribbon for the reopening of the entrance to the Metropolitan Museum of Art’s American Wing, the Charles Engelhard Court, on Monday afternoon, gathering a boldface lineup of New York society who sat elbow-to-elbow with a group of students from four public schools in Manhattan.

Obama, who was in the city for a day of cultural activity — her evening agenda included an appearance at the American Ballet Theater opening — was quick to remind the audience, which included Annette de la Renta, Ralph Lauren, Aerin Lauder, Wendi Murdoch, Anna Wintour and retired Met director Philippe de Montebello, that the President had allotted $50 million to the arts in the recent stimulus package. Yet she noted that painting, pottery and, yes, fashion design aren’t just the provenance of the very rich or sophisticated (this drew applause).

“The intersection of creativity and commerce is about more than economic stimulus,” Obama said. “It’s about who we are as people.” Cultural organizations, she explained, have an obligation to include and serve people of all different backgrounds, adding, “I want to applaud the Met for all the outreach that you do.”

The reopening of the Engelhard Court marks the completion of the second part of the American Wing’s renovation, which will cost in total about $100 million and is scheduled for completion in 2011. With Mayor Michael Bloomberg, New York, Sen. Kristen Gillibrand, and the Museum’s newly installed director, Thomas P. Campbell, looking on from the dais, Obama invited a handful of the students onstage to help her cut the magenta ribbon, with each making a beeline for a First Lady hug. After working the small crowd of donors and students with handshakes, Obama departed, reportedly for the ABT, where she was to observe some classes before attending the gala (a spokesperson noted there would be a costume change in the afternoon).

Yet the model Iman, who was also in the audience, stuck around, chatting with and wrapping her arms around high school and elementary school students as they lined up to snap cell phone pictures.