An exhibition about the collector’s 25-year love affair with the Japanese label just opened in Frankfurt.

When Germany’s lockdown came into effect on March 14, Michelle Elie had just returned from the fall 2020 collections in Paris.

The jewelry designer and fashion collector had attended her favorite show, Comme des Garçons, wearing a stiff, cage-like Comme skirt that jutted into the narrow runway when she took her front-row seat. Accustomed to wearing Rei Kawakubo’s sometimes unwieldy fashions, she threaded her legs through the lattice of fabric and tucked in her feet so as not to obstruct anyone’s view.

Back home, preparations were under way for “Life Doesn’t Frighten Me: Michelle Elie Wears Comme des Garçons,” an exhibition at the Museum Angewandte Kunst, the museum of applied arts in Frankfurt. It finally opened on Monday, a month later than expected due to closures related to the coronavirus pandemic. 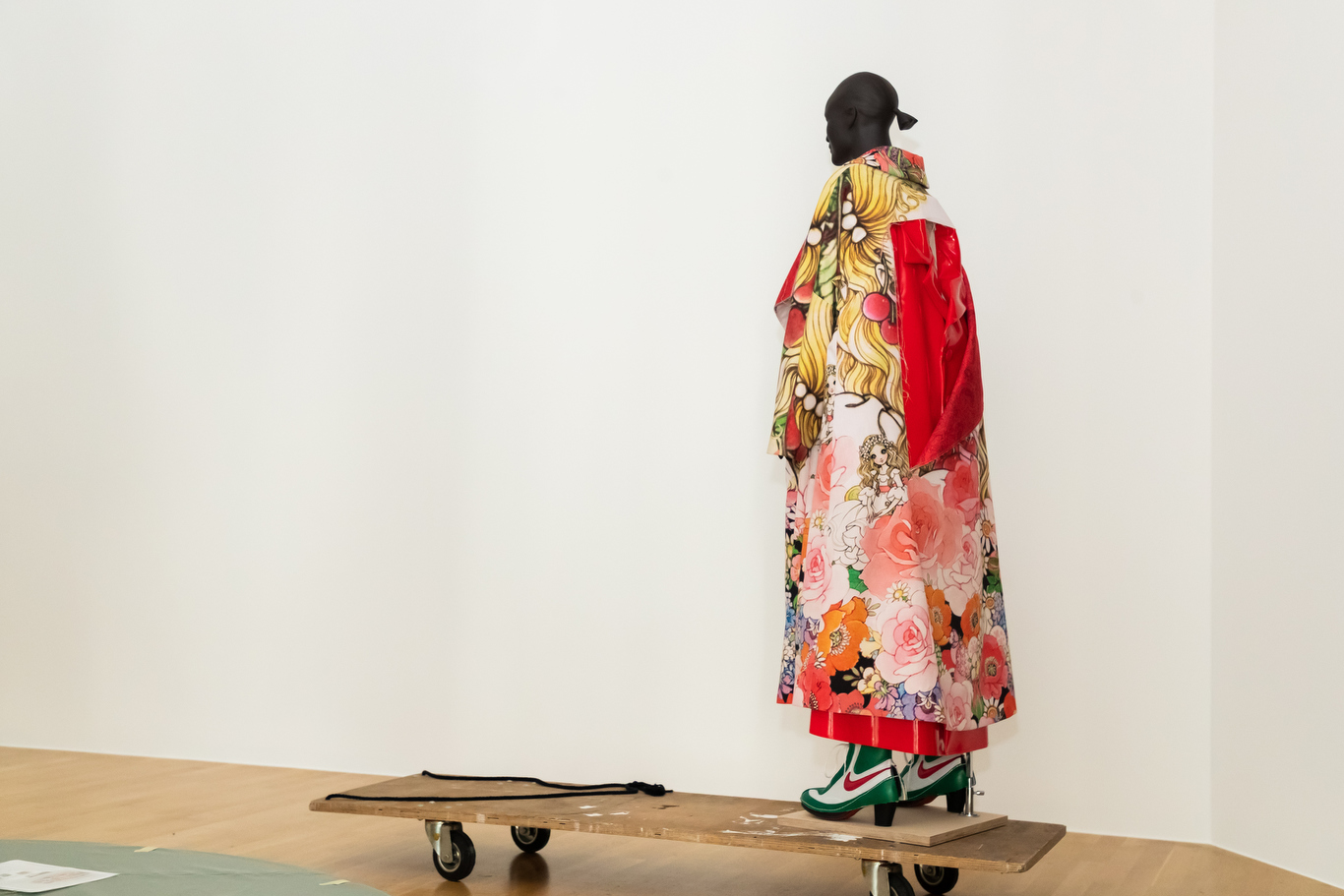 Born in Haiti, raised in New York, and now based in Cologne, Elie bought her first Comme des Garçons piece in 1997 and has continued since, always with a discerning eye. “I don’t love everything Rei Kawakubo does. I like to digest a collection. I don’t buy without reflecting on it and what it does for me. Sometimes, it takes me years,” she says. “Right now, I’m looking for the 2011 collection, which was phenomenal. The two dresses, unwearable-wearable. I overlooked that collection.”

Until recently, Elie had not considered her Comme des Garçons outfits a collection. “After an exhibition I was organizing for a friend fell through, my husband [artist and designer Mike Meiré] suggested I use the already rented space for my collection. I said ‘What do you mean, my collection?’ and he replied ‘Your clothes, from upstairs,’” she recalls. “That’s when I realized I had one.” He also encouraged her to document her dresses and was the one who offered to show Elie’s collection to a member of the Museum Angewandte Kunst the following year during Art Cologne.

The exhibition, curated by half-Nigerian, half-German author and curator Mahret Ifeoma Kupka, presents 50 looks from Elie’s 70-piece collection from Comme des Garçons. (Elie also boasts some Prada and Junya Watanabe in her closet.) The Frankfurt exhibition is unaffiliated with the brand, although Adrian Joffe, president of Comme des Garçons International and chief executive officer of Dover Street Market, allowed use of the name in the title. 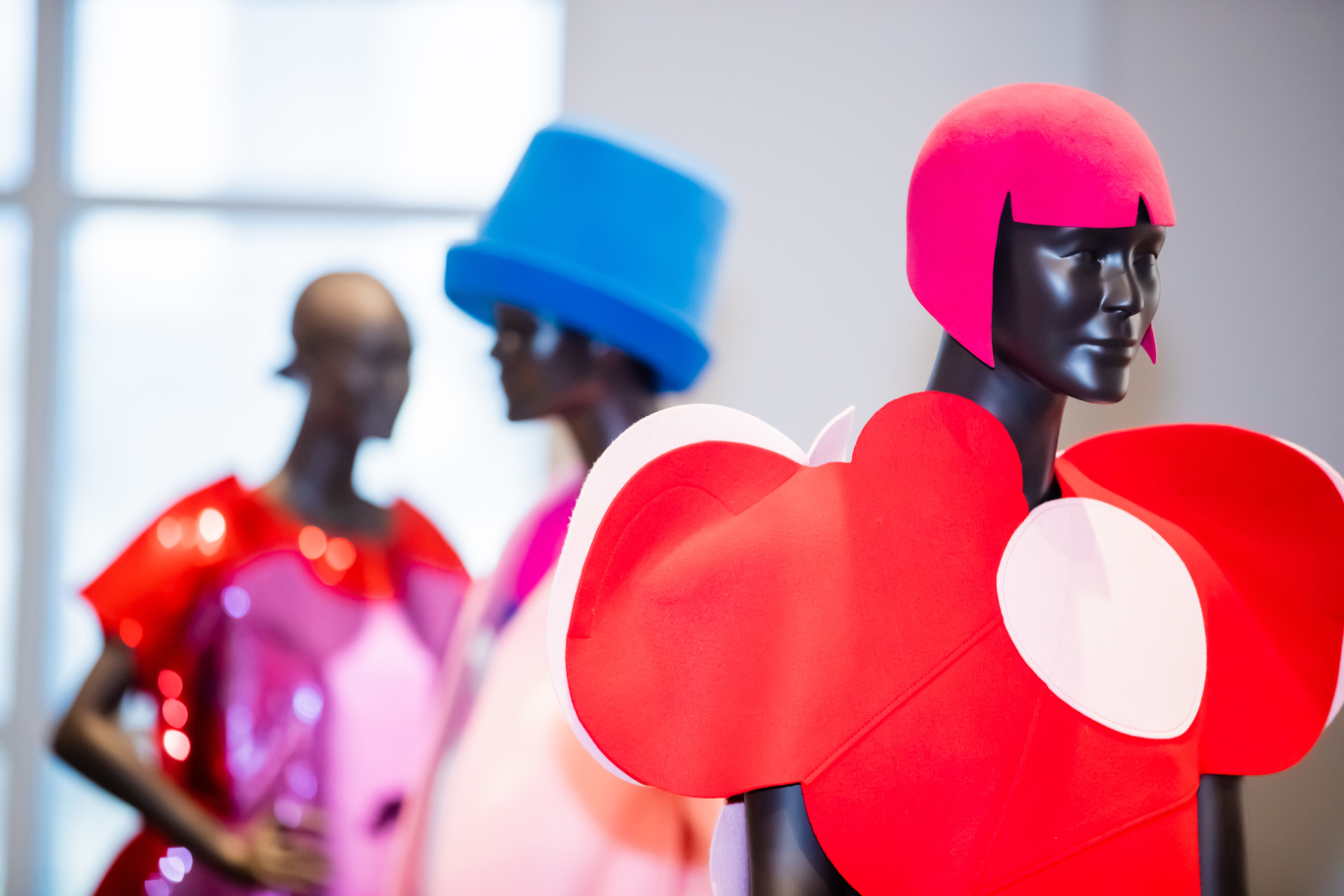 The title was inspired by a phrase Elie’s late mother often used. “Fear stops a lot of things, even simple decisions. The saying stuck with me. When I got a contract to go to South Africa for six months, she told me to open my eyes and go, saying that she’d wished she had the opportunity,” says Elie, who worked as a model for a decade, and is now a stylist and designer. “I have a lot of respect for people who look for a better life. My dad was also one of the people who took a boat from Haiti to the Bahamas. You’ve got to be not afraid. If life had frightened me, I wouldn’t have gone to Miami with $30 in my pocket and walked into a modeling agency, wouldn’t have gone to South Africa or Paris. I wouldn’t be in Germany 20 years later.”

Preparing for the show gave Elie a new appreciation for the curatorial process. “You go as a visitor and you see the end result, but no one realizes the amount of work that goes into building the exhibition,” she says.

She also learned loads about conservation. “I no longer take my clothes for granted. They had to create hangers for the clothes because the ones I’d used had deformed the clothing. And since then, I’ve completely redone my atelier for light, putting UV filters on the windows, putting clothes in archival garment bags. An art archive I had contacted didn’t want to take any clothes, so I contacted a butcher to use their freezer.” 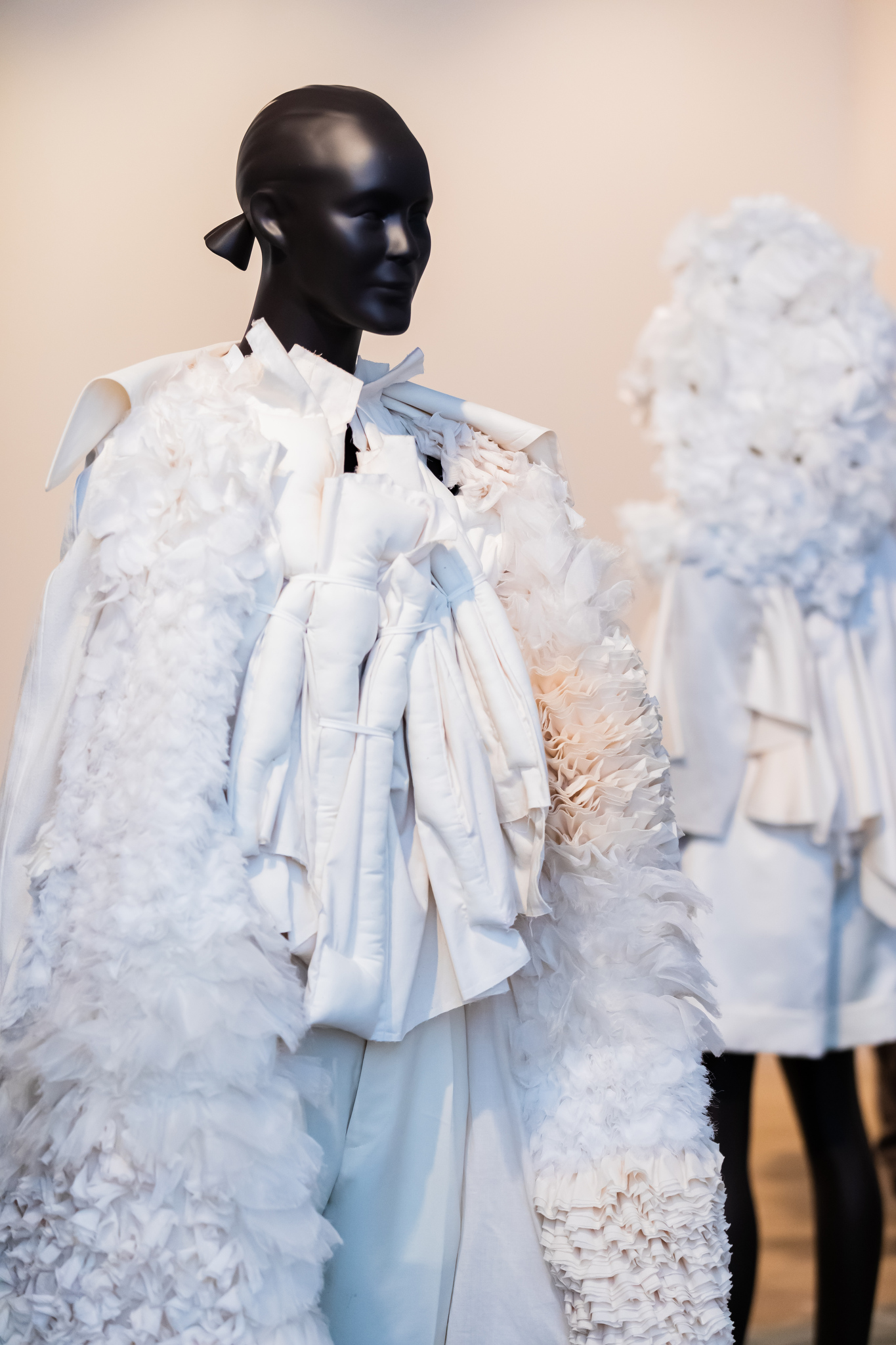 Another challenge Elie faced was the valuation of her pieces for insurance purposes. “You don’t keep receipts for clothes,” she said, joking that she hadn’t wanted her husband to see them.

She appreciates that Kawakubo’s pieces are for “women who are not validated by their husbands,” she adds. “That’s what I like about Rei: she talks about women’s issues. A lot of it references body transformation and how women didn’t have a voice. In the past, if [a woman] had a voice or knew better or had a vision, you were called a witch and burnt at the stake. When I first came to Germany, women could only work half a day because schools let out at noon.”

According to museum director Matthias Wagner K, the exhibition goes far beyond clothes to talk about Elie’s “perspective on society from a very personal point of view. As a black woman like Michelle Elie in a white majority society, affected by racism and prejudice, she does not and does not want to conform to social norms and beauty ideals with her appearance,” he explains in a YouTube clip. 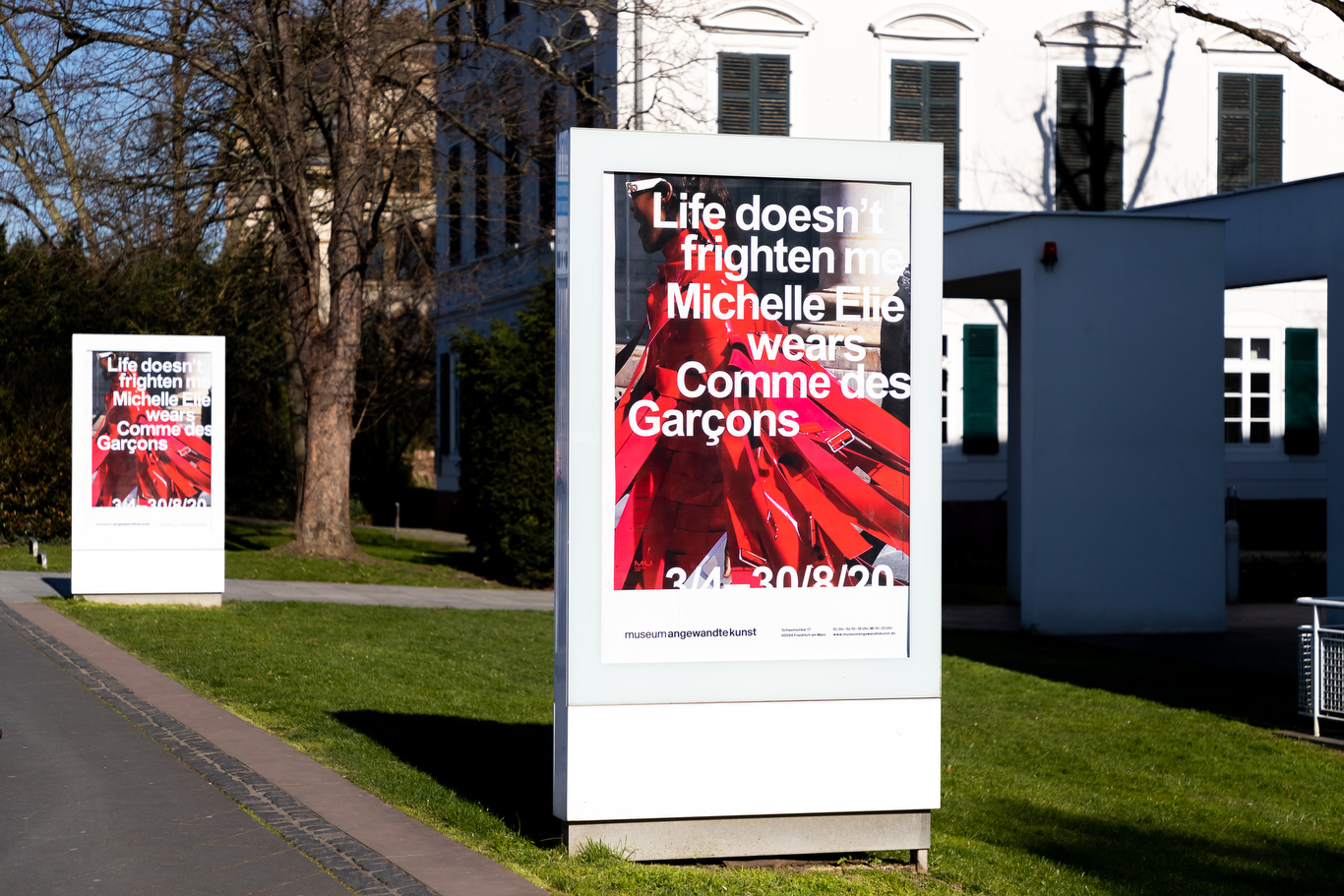 Another issue that Elie addresses is representation. When Kupka suggested using her likeness for the mannequins, Elie insisted they also have her skin tone. “Before coming to Germany, I used to model. I was at the same time as Naomi [Campbell] and there wasn’t that much space for me. There’s always one girl that the industry takes and uses for five years. Mahret is a feminist. Her message is ‘woman of color.’ Mine is ‘there’s not enough of us in a museum,’” she said, quoting the words African-American painter Kerry James Marshall.

“I was blown away by his speech when he said he was interested in changing the [visual] language by putting his paintings, depicting people of his own color, into museums. I had never seen it like that. The moment he said it, I noticed that unless you went to an African museum, you would see black women but only as a background,” she said. “He opened that conversation for me. So deciding to make the mannequins dark-skinned, instead of white as I’d imagined them because that was the color they’re produced, is significant because it adds another brick in the conversation about [representation]. It doesn’t matter how I got there, although I love the fact that it was the clothes of Comme that got me in.”

The exhibition runs until Aug. 31 and Elie is keen to organize children’s tours of her exhibition. “I would have loved to see this as a child. You can start changing perspective very early on. Children have no judgment; they see things how they are, even though they may not understand and intellectualize it,” she said.