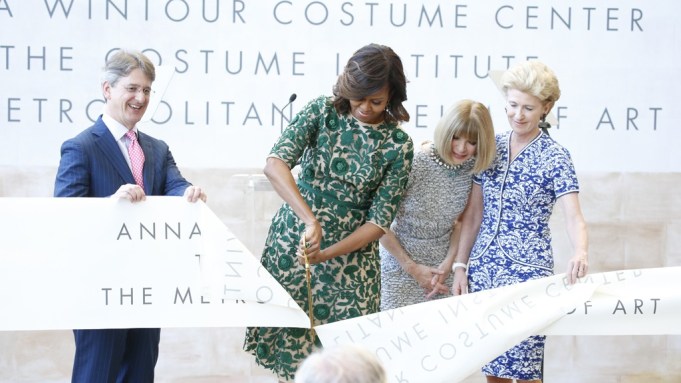 NEW YORK — So much for just another mopey Monday morning.

On this particular one, an impressive fashion crowd made its way to The Metropolitan Museum of Art for the unveiling of the Anna Wintour Costume Center replete with First Lady Michelle Obama cutting the ribbon. Timed in conjunction with The Costume Institute’s “Charles James: Beyond Fashion” exhibition, every fashion designer in town showed up — from Michael Kors to Francisco Costa, Calvin Klein and Donna Karan to Tommy Hilfiger, Marc Jacobs, Vera Wang, Diane von Furstenberg, Kenneth Cole, Reed Krakoff, Proenza Schouler’s Lazaro Hernandez and Jack McCollough and Zac Posen. There was also a heavy European contingent — all here for Monday night’s Costume Institute benefit.

“It’s a very different Monday morning from what I am used to,” Jason Wu marveled, scanning the room, which also included Baz Luhrmann and Catherine Martin, Mario Testino, Jonathan and Lizzie Tisch and Iris Apfel (the Tisches and Apfels made significant contributions to the center’s renovations).

As Jacobs put it, “With Anna, nothing is average.” That of course includes the presence of Obama, though Jacobs somewhat deflected on that point. “It’s true, but, well, Anna is our first lady.”

“It’s an incredible turnout,” said Beckham. “It’s so nice to see so many people I know.”

With such buzz about the gala’s dress code — white tie and decorations — Beckham disclosed that husband David wouldn’t be in tails. “He is wearing a white jacket,” the designer said. “He didn’t realize he had to, and just found such a beautiful Ralph Lauren tuxedo that he liked.”

Speaking of Lauren, he dressed several men for Monday night’s gala, including his onetime arch rival from the Bronx, Calvin Klein. Lauren recalled getting Klein’s call at 8 a.m. last Thursday morning. “He said, ‘Ralph, I need help. I didn’t think I was going to wear tails and don’t know what to do,’” Lauren said, describing the moment as an emotional one given the two designers’ entwined history. “I said, ‘Let me see if I can make it for you.’ We held the factory open for him for the weekend, and I think he’s very happy.”

Thomas Campbell, director of The Metropolitan Museum of Art, described The Costume Institute as “a forum to explore not just what we wear but what this medium can evoke. Our clothes punctuate a much larger conversation about who we are, and how relevant our history is.”

To that end, he called the naming of the new Center after Wintour “a fitting tribute,” citing that her “ceaseless enthusiasm and advocacy have been so significant to us.”

Obama then took the stage to an enthusiastic reception.

“I know that Anna hates being the center of attention, so this is all probably killing her, but we love it,” she said. (Wintour herself refrained from making remarks.) “But the truth is I am here today because of Anna. I am here because I have such respect and admiration for this woman who I am proud to call my friend. And I am here because I am so impressed by Anna’s contribution not just to the fashion industry but to the any causes she shares and cares about, particularly this great American museum.”

Obama had a direct message for the students from the Fashion Institute of Technology and the High School for the Fashion Industries, who were also in the audience. Like them, she hoped students may “come initially because they love clothes and they love shopping, but then they will learn that fashion is not just about what we wear, but that fashion is also a business. It is an art, it’s a career that involves science, engineering, accounting and so much more. People can learn about the math behind Charles James’ designs, and think, ‘Maybe I should pay closer attention to geometry this semester.’”

She also expressed hope that once they visit the new Anna Wintour Costume Center, they will be inspired to see the rest of the museum. “Maybe they will spend an afternoon learning about Islamic or Asian art, maybe they will check out the photographs or view the endless galleries of American art.”

She added that it is fitting to honor Wintour, who has used her platform as editor in chief of Vogue beyond the pages of the magazine, disclosing there is a White House fashion project in the pipeline.

“Today, Anna and I are working on an idea to bring students to the White House for a fashion workshop,” Obama said. “The idea is to show young people what it takes to succeed and how important it is for them to commit to their education. Anna understands that those of us who have been blessed with opportunities to succeed have an obligation to reach back and bring others along with us, and not just with words and praise but with meaningful sustained support.”

Her overall message was one of inspiration. “You are here because we want you to dream bigger, you are here because we believe in your progress and we know that if you commit to your education, if you work like never before, if you have the courage and fail and fail and fail again until you finally succeed, then one day you will be just like the legendary designers who are here today,” the First Lady offered. “One day you can be up here in the fashion industry, or in any industry you choose. When that happens for you, I hope you give back and see who you can bring up with you, like Anna does.”

For her part, Wintour was visibly moved by a sustained standing ovation.