Maria Cornejo, Prabal Gurung, Krakoff and Bibhu Mohapatra will be among the designers who will be pitching in at 1600 Pennsylvania Avenue on Oct. 8.

By Kristi Ellis and Rosemary Feitelberg on September 17, 2014
View Slideshow 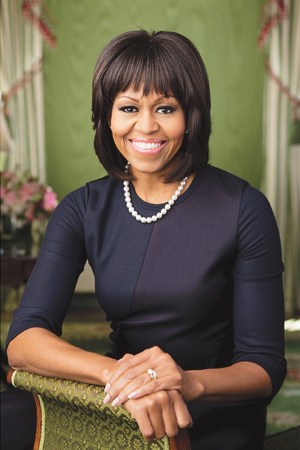 Michelle Obama may want to be the First Lady of fashion after all.

This story first appeared in the September 17, 2014 issue of WWD. Subscribe Today.

Throughout President Obama’s two terms, his wife has helped elevate a myriad of designer and fashion labels simply by wearing them. Whether donning Thom Browne and Reed Krakoff at the 2012 inaugural festivities or J. Crew for an on-air chat with Jay Leno, the First Lady’s every fashion move has been chronicled and critiqued by reporters, bloggers and voters alike. Some designers have maximized their good fortune, like Barbara Tfank, who posted on her Web site’s home page a large photograph of the First Lady wearing one of her designs.

But while she has championed American fashion with her own personal style, Obama generally has eschewed mingling too much with designers (apart from the occasional fund-raising events in Manhattan, such as one last year at Tory Burch’s home). When the Council of Fashion Designers of America saluted her with its Board of Directors Tribute Award in 2009, she accepted via video.

Now that her husband’s administration is into its last two years, the First Lady might be less reluctant to keep a safe distance from the designer crowd. For example, next month FLOTUS will host the first Fashion Education Workshop at the White House on Oct. 8. “The purpose of this event is to bring members of the fashion industry to the White House and enlighten, educate and mentor the next generation of fashion leaders,” according to an e-mail written by White House social secretary Jeremy Bernard that was obtained by WWD Tuesday. “As a prominent member of the fashion industry, we would love to have you participate on October 8th and share your talent, expertise and advice with students who have demonstrated a strong interest in a fashion career.”

High school and university students from Washington, Maryland, New York and Pennsylvania will be in attendance, according to his e-mail. The five-hour event will include individual workshops, followed by a luncheon featuring remarks by the First Lady and a panel discussion.

A White House official told WWD Tuesday, “On October 8, the White House will hold a fashion education workshop that will connect students with leading fashion professionals — from designers to magazine editors to fashion technologists — to show young people what it takes to succeed, and how important it is for the next generation to commit to their education.”

In a follow-up email to the workshop’s participants, Bernard advised, “We appreciate your discretion as we continue to plan this wonderful event.”

While the White House declined to name any of the invited guests, it seems as though several of the more-established names in American fashion were overlooked. The selection may just be aligned with the First Lady’s preference for young and often independent designers. Or perhaps the escalation of ISIS, the Ebola outbreak and continuing strife in the Ukraine have White House officials more concerned than ever about hosting a splashy party for fashion designers amidst global crises.

Maria Cornejo, Prabal Gurung, Krakoff, Lela Rose and Bibhu Mohapatra will be among the designers who will be pitching in at 1600 Pennsylvania Avenue on Oct. 8. Gurung said Tuesday, “The Fashion Education Workshop being held at the White House on October 8 is definitely exciting, aiming to lift up the opportunities for education within the fashion industry it goes to show the level of prestige that American design has accomplished, both as an art and as an industry.”

Afterwards, the First Lady will host a Celebration of Design reception with a host of other designers and fashion executives including Naeem Khan, Vanessa Bismarck, Amour Vert’s Linda Balti and executives from Jimmy Choo and Talbots. Jason Wu, whose gowns the First Lady wore for the Inaugural Ball in 2008 and in 2012, is believed to be on the that list, as well as Browne, Diane von Furstenberg and Thakoon Panichgul. Several designers deferred any comment Tuesday to the First Lady’s press office.

Some designers who were contacted said they could not attend the Oct. 8 event because of the timing. Aside from falling in the post-selling season of the spring runway shows, some designers said they were only invited 10 days ago or less. Donna Karan cannot join the Oct. 8 crowd, since she is being honored that night by the Philanthropic Society of Los Angeles. Burch had to decline due to an already planned trip to Dallas for her new watch collection with Fossil. Mohapatra decided to reschedule an October trip to India in order to attend the event.

As the honorary patron of the Cooper-Hewitt’s National Design Awards, Obama has hosted each year’s respective winners at a White House luncheon. In that role during her husband’s presidency, she has celebrated a whole host of design fields and lauded NDA fashion design winners such as Behnaz Sarafpour and Browne. Obama has also hosted a D.C. Teen Design Fair over that span of time, an education program allowing teens interested in design to meet NDA winners, jurors and guest designers and discuss education and career opportunities in design fields.

The First Lady’s Oct. 8 workshop and Celebration of Design reception falls in the midst of this year’s National Design Week and on the eve of the 15th annual NDA in New York. Over the years, the Cooper-Hewitt has held design workshops for students in Washington, but never at the White House.

Interestingly, this year’s D.C. Teen Design Fair is set for Sept. 30, and will be followed by a White House luncheon hosted by the First Lady later that day to honor the Cooper-Hewitt’s NDA winners, according to a Cooper-Hewitt spokesman.

For some designers headed to the Oct. 8 celebration, going to the White House will be a repeat performance. “Superexcited” as Mohapatra is to be invited, he once joined Gurung, J. Crew’s Jenna Lyons, Mary Alice Stephenson and Alexis Bittar for a concert of Memphis Blues in the East Room. Justin Timberlake, Queen Latifah and Cyndi Lauper were among the performers on that occasion last year, Mohapatra said. “It was such a joy to be sitting two feet away from the most important man in the world and to see him groove with his family. It was so exciting to be in the White House and to be with the First Family,” the designer said. “To be invited this time [for the Oct. 8 event] feels a little validating — your work is considered relevant enough to be invited.”