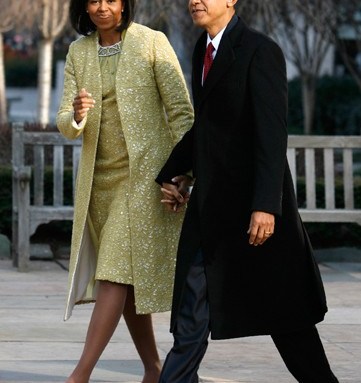 “We’re levitating – we really are,” Ruben Toledo said minutes after watching Michelle Obama on CNN in an ensemble by his wife Isabel. The husband-wife team tuned in surrounded by their staff in their Broadway showroom.

The soon-to-be First Lady did not tip her hand in any way. “We had no idea. We hoped she would wear something because she has bought Isabel’s clothes before. We never know what’s going to happen,” he said.

“It’s just another shock, but a great shock.”

The First Lady-to-be seems to prefer secrecy about her outfits. She wore a Maria Cornejo coat on Saturday on the train ride to Washington, which was a pleasant surprise to the designer, and at today’s event she wore Jimmy Choo’s “Glacier” pumps. On Monday, Obama and her daughters Malia and Sasha then turned up in J. Crew and its children’s label Crewcuts at the Jonas Brothers concert for the “Kids Inaugural: We Are the Future” event.

The retailer received no advance notice.