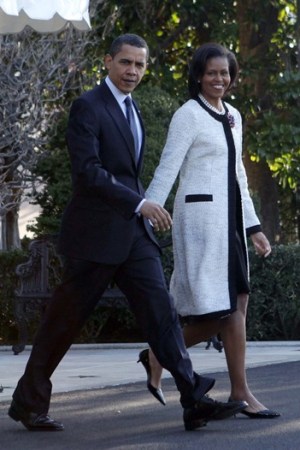 Michelle Obama arrived on her first official trip to Europe with style — and a continued show of support for her country’s young, emerging talent.

“She knows what she likes, and she’ll wear it with great comfort and confidence,” said Thakoon designer Thakoon Panichgul. “She’s a dream customer.”

Wu said the First Lady has had the chartreuse dress for a while — it was part of a wardrobe he designed for her earlier in the year. “I had no idea she was going to wear it,” Wu said.

He said he designed the dress without knowing the occasion, but felt she picked the right moment to wear it. “Yellow is such a great color, and it’s nice that we are seeing spring right now,” Wu said. “It’s definitely very optimistic.”

Wu is becoming quite a regular choice for the First Lady. In addition to his off-the-shoulder white dress embellished with organza flowers and Swarovski crystals for the inaugural balls, she recently wore one of Wu’s dresses while giving a tour of the White House kitchen prior to the Governors’ Dinner.

Wu was in London last week and already sensed the city’s excitement about the presidential visit. “It’s so assuring that even on European ground, she is wearing American designers,” he said.