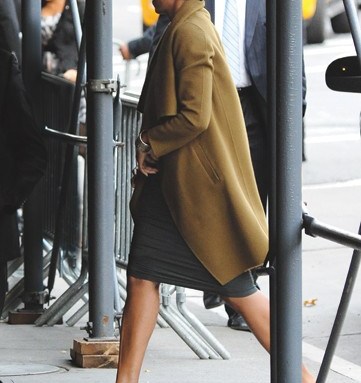 With her husband’s party facing an uphill battle in the here-before-you-know-it midterm elections, First Lady Michelle Obama could at least count on support among her fashionable base Monday evening.

The First Lady arrived shortly after 5 p.m. and was quickly hustled inside by Secret Service agents. Barricades and some preexisting scaffolding on the building’s facade ensured that onlookers would only get a side view of Obama on her way in. Those quick enough to catch a glimpse saw that the First Lady, now a veteran in such matters, wore a camel-colored coat over a dark dress — both by Donna Karan — with silver heels.

The scene outside resembled a small-scale version of the last visit an Obama played to the fashion flock in August, when the President attended a fund-raiser at Anna Wintour’s West Village town house that drew a similar guest list. Earlier in the proceedings Monday, the New York Police Department escorted a number of protestors from People for the Ethical Treatment of Animals, who toted placards complaining about Karan’s use of fur, across Central Park West and a block south of the building’s entrance.

Sources said that once inside, guests posed for photos alongside the First Lady, a contrast to the velvet-rope-style greeting that has unnerved the D.C. social set as of late. Sources said Karan first introduced Biden, who offered a few remarks, and then her guest of honor Obama. In her speech, the First Lady recalled her late father, Fraser Robinson 3rd, who suffered from multiple sclerosis and struggled to get to work every day but did it for his family. He is a major source of inspiration to her.

After the Karan-hosted cocktail party uptown, Obama was Broadway-bound. Sarah Jessica Parker, another design-friendly Democratic pal, was due to host a special performance by Patti LaBelle at the St. James Theater.

Guests who attended the evening’s Act I sung Obama’s praises as they headed back out into the fall chill.

“I think she is the perfect trifecta,” Kors said. “She is powerful, human and galvanizing.”

Nanette Lepore said that even though the encounter was short, it was well worth it. “It is so important to get the enthusiasm back to what we had two years ago when the President was elected,” Lepore said.

“She is gorgeous and smart,” said von Furstenberg, who dashed off early for another political event. “Unfortunately I had to leave before she spoke, because I had to support [Richard] Blumenthal, hopefully my future senator in Connecticut.”

The early goodbye was something of a theme on Monday night. Russell Simmons left about 20 minutes before Obama arrived. He had thought about sticking around to chat to the First Lady about well-being initiatives in schools, a topic he’s raised with her before.

“It’s a little early to bug her about it again,” Simmons said, before heading off to attend to his own well-being.