What will the First Lady wear to tonight's State of the Union address? Does it matter? 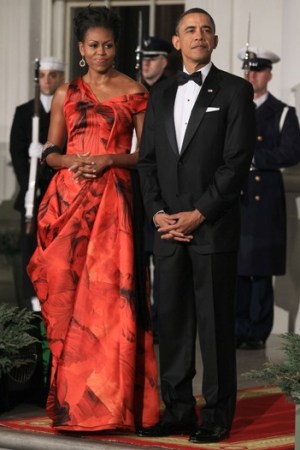 Tonight, President Obama will deliver his State of the Union address to an unusually seated congress. Various Democrats and Republicans will settle in, not in their petulant camps, but distributed throughout the room in cozy blue-red couplings. The arrangement, which some are calling “date night,” will make the typical audience shots all the more interesting. Still, the one audience member likely to get the most camera time is Michelle Obama.

What will Mrs. Obama wear? Does it matter? After the initial press and public obsession with her wardrobe that accompanied her husband’s campaign and early presidency, fascination waned. But now, with the President’s approval ratings on the rebound and after the very high-profile state visit of the People’s Republic of China President Hu Jintao last week, interest is percolating again.

History suggests that Mrs. Obama will wear American; at the President’s last State of the Union address, she wore Isaac Mizrahi. She wears American clothes frequently; anecdotal Internet searches indicate they comprise the bulk of her wardrobe.

Which makes all the more curious her choice of Sarah Burton’s beautiful red and black Alexander McQueen gown for last week’s state dinner, the high-glam anchor of President Hu’s visit, which centered on Chinese-American trade. Topics included concrete matters such as currency, and the U.S. presumption that a strategically undervalued Chinese yuan helps fuel the trade deficit currently at $275 billion. It also covered the issue of intellectual property.

Should Mrs. Obama choose not to wear American tonight, we can expect not a peep from the fashion world, whose members get giddy with glee when she does actually step out in their wares. Not a peep, that is, save for one elder statesman type, with a penchant for speaking his mind, Oscar de la Renta.

De la Renta was disappointed at the sight of Mrs. Obama in McQueen last week. “My understanding,” he told WWD, “is that the visit was to promote American-Chinese trade — American products in China and Chinese products in America. Why do you wear European clothes?”

Numerous Web sites picked up the designer’s comments, triggering a flurry of responses. The dress was fabulous. The dress was an atrocity. The color red carries deep symbolism in Chinese culture. Jackie wore Chanel during her White House years. Mrs. Obama should have the same right as any other woman to dress as she pleases. And one particularly offensive (not to mention stupid) oddity, a comment posted to Popeater’s coverage: “The Obama’s [sic]…always look like white trash.” As for de la Renta, he’s either a straight-shooter or old and jealous.

“This is an important issue,” de la Renta elaborated on Friday, the day WWD’s item ran. “Some people did not get the point. It’s not [intended] to be negative. Do you think Kate Middleton is going to be married in Marc Jacobs? Or you’d see Carla Bruni dressing in American clothes? This is a big industry in this country. Mrs. Obama does look great. She should take that and do something. She could do a great good for our industry. We need to create jobs here, create jobs on Seventh Avenue, too.”

Oscar’s point is well taken for a number of reasons. All Michelle Obama wardrobe sightings — and thus, for lack of a better term, product placements — are not created equal. A White House Christmas party or a school visit doesn’t have the same resonance as it did two years ago, or as an event of major international interest today. Then there’s the overt context of President Hu’s visit — to discuss trade — and, for this industry, its fashion subtext: China is redefining the global luxury and apparel industries at both the producer and consumer sides.

Thus, the billing of Wednesday’s soiree as quintessentially American, inclusive of steak, Idaho potatoes and jazz after dinner. Yet there was Michelle Obama flaunting an Alexander McQueen dress. If perhaps unrealistic to wish that the President had added fashion to his above product litany — although why not? — might not Michelle Obama have chosen to send the message visually?

No one celebrity “get” ensures long–term security for a fashion house. If Jason Wu is in business 20 years from now, it won’t be because his now famous Inaugural gown for Mrs. Obama resides at the Smithsonian.

Still, her sartorial choices send powerful messages — some more than others. That’s what fashion does: It sends messages, some explicit, some open to interpretation. In what we choose to put on every day we telegraph some kind of message about ourselves.

In her fashion choices since her husband’s election, Michelle Obama has telegraphed plenty. Hers is a modern sensibility. She has a comfort zone — the chic sheath — but a bravura that pushes her to take chances. She and/or her fashion advisers know all about the new, the off-beat, the experimental labels, and about mainstream international houses. She doesn’t feel an exclusive obligation to act as a poster client for American fashion, which fuels her sophisticated persona. Like Jackie and Nancy before, she’s a First Lady who’s not afraid to enjoy fashion.

Beyond that, comparisons to Jackie and Nancy don’t work; they lived in much different times and no doubt felt far more constrained by convention than does Michelle Obama. Still, the fact that she faces almost no push back on her culling of international fashion is fascinating, and at least in part due to her popularity among the press and the American fashion establishment.

From her choice of a British designer’s dress for this particular event, could one infer that Mrs. Obama found among American collections nothing up to her eveningwear standards? (Take that, American fashion’s inferiority complex.) While hardly the same impact, the thought process is not significantly different than if President Obama were to have, in full view of his Chinese guests, left the White House and stepped into a waiting Rolls-Royce.

De la Renta suggested that Mrs. Obama might have worn something from one of the younger designers whom she supports so enthusiastically, many of whom make at least some of their clothes on Seventh Avenue. As this was a power summit of sorts, the powerful Ralph Lauren might have made sense as well. Or perhaps an artful look from the most famous Chinese-American designer — and dinner guest — Vera Wang.

To wear something other than American at this particular trade-centric mega-fete embarrasses a major U.S. industry that continues to need all the help it can get.

Yet, except from one lone voice crying out from his stronghold at 550 Seventh Avenue, who is delivering that message? Where is the lobbying, from individual designers, or from the CFDA as an institution? If one maintains that fashion is a global industry and countrywide promotion is outdated and jingoistic, then what exactly is the CFDA’s raison d’etre? Conversely, if one believes that a little nationalistic marketing is beneficial to the American industry, then why is Oscar a lobby of one?