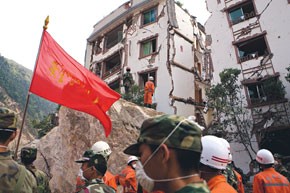 CHENGDU, China — Hu Shaoyu left his family in Sichuan in February, expecting to see them again next Chinese New Year when he returned for his annual visit home from the clothing factory on the other side of the country where he works.

Instead, news of the devastating earthquake that struck near here, flattening cities and towns and killing as many as 80,000 people, brought him back just two months later, struggling to pick up the pieces of his fractured family. Before he boarded the train in Guangzhou for his two-day journey across China’s interior back to Sichuan, Hu already knew his elder sister had been killed and his five-year-old nephew was missing somewhere in the rubble. He hoped to return home and break the news gently to his elderly parents, and help his brother-in-law recover and rebuild.

“My own son was safe, but I had to tell them that my sister was dead,” recalled Hu. “It’s just too, too sad.”

Upon hearing the news of her daughter’s death, Hu’s mother, already in ill health, died two days later. She survived the quake in Leigu, the family’s hometown, but 36-year-old Hu believes the shock of losing her daughter and grandchild was simply too much for the elderly woman to bear.

A week after the May 12 earthquake, Hu, a slight man dressed in a melon-colored polo shirt and gray slacks, scoured the names of survivors posted on a bulletin board outside a hospital in Chengdu. His sister’s husband lay inside with a severely fractured leg, awaiting surgery. For Hu, life back at the Guangzhou clothing factory, where he oversaw part of production on apparel bound for Taiwan, Japan and Hong Kong, mattered little. His boss at the factory was very understanding and told him to go home as soon as news of the quake hit. He doesn’t know if or when he will return to work.

Hu’s is a story replayed time and again in Sichuan province since the earthquake struck. He is one of China’s estimated 150 million to 160 million migrant workers and farmers who have struck out to fill the factory and construction jobs that have sprung up along with China’s economic boom. Sichuan province is one of the country’s largest sources of migrant labor, with 10 million to 20 million Sichuanese — at least 13 percent of the province’s total population, according to government statistics — now working outside their hometowns with few, if any, social welfare benefits.

Most leave not because they want to abandon the comfort of home and family, but because they have little other choice. Wages in the Sichuan countryside are low and remain stagnant, while farming does not support as many people as it once did. Their children and families require more cash these days for school fees and daily necessities, so migrant work away from home is the only way for these farmers to make ends meet.

Migrant workers are the primary source of labor for textile and apparel factories, and factories of all sorts, on China’s eastern seaboard and in the manufacturing center of the Pearl River Delta. The 7.9-magnitude quake destroyed thousands of these migrant families already hanging by a fragile thread. In towns and cities across Sichuan in the days following the earthquake, migrant workers made their way back in a steady stream to assess the damage and try to figure out how to rebuild, restore their families and, in many cases, simply pick up the pieces. Many spent weeks’ worth of wages to get back, setting themselves up for economic hardships not easily reversed.

Because of a household registration system left over from the Fifties, China’s citizens are not free to move about the country for work, collecting benefits like education for their children and health care wherever they choose. Thus, many leave their kids in the care of elderly relatives when they strike out for work on the east coast. Otherwise, the children would not be educated.

In Xiang’e, a small town northeast of Chengdu, only the elderly remain. Residents say all of the second-generation villagers left for migrant work after the town’s sole source of income, a coal mine, shut down 10 years ago. When the earthquake hit, some 300 children died in a school that collapsed like hundreds of others across the region. Remaining residents say migrant workers returned a few days after the earthquake to collect surviving children, then left again.

The disaster has forced migrants to make extravagant choices that will affect their finances for some time to come. Most earn around $150 to $200 a month, depending on their work, location and experience. Most of that money is sent home to Sichuan to pay school fees and other family expenses.

Liu Deyun did something he had never done before to get back to Leigu city in Sichuan province to make sure his family was safe. The “hard seats,” which are exactly as they sound, were all sold out for the two-day, 600-mile journey from Jiangsu province on the east coast. He had to buy a ticket in a sleeper car, which costs roughly $50 instead of the $23 he normally pays to get home.

He feared the worst when he learned his daughter’s primary school had collapsed with 200 children still inside. At a refugee camp in Mianyang, where a stadium shelters 30,000 homeless after the quake, Liu lauded the quick thinking and actions of a teacher who got the kids out of the school before it fell to the ground.

Liu doesn’t know if he’ll ever return to Jiangsu and his life of factory work, far from his family. He doesn’t even know if he still has a job, as he left without getting his boss’ permission. For now, that doesn’t matter. He hugs his 12-year-old daughter tight as they sit on the curb outside the stadium.

“I thought for sure my daughter was already dead,” he said. “I’m so grateful to that teacher.”