The number of U.S. buyers increased by more than 50 percent at the seventh edition of White, establishing the cutting-edge fashion and accessories fairs as an essential stopover in their increasingly tight schedules. 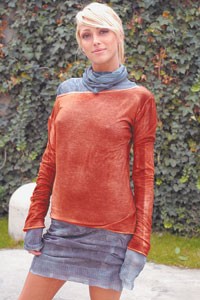 MILAN — The number of U.S. buyers increased by more than 50 percent at the seventh edition of White, establishing the cutting-edge fashion and accessories fairs as an essential stopover in their increasingly tight schedules.

“White is better edited than rival shows, making our lives as retailers much easier,” said Alice Blatt, a buyer for seven Searle stores in New York.

“It seems better attended than in the past and people seem more serious about buying,” added her partner, Steve Blatt.

Fair organizer Efima confirmed visitor numbers to White and its sister fairs, NeoZone and Cloudnine, were up by 15 percent to 8,220 compared with September 2004. Overseas visitors increased by 21 percent to 2,139, while the number of U.S. buyers rose to 100 this fall from 47 in September 2004.

The fair was held at the Superstudio Più in Via Tortona Sept. 29-Oct. 2.

“This fall, 312 brands showed at White, NeoZone and Cloudnine — up from 262 last year,” said Agostino Poletto, Efima’s director. “Of these, 144 were new names — chosen from over 400 requests from potential exhibitors — demonstrating our commitment to innovation.”

Poletto also commented on an agreement with Expo CTS, organizers of rival Milan fair Milanovendemoda, aimed at creating a more harmonious Milanese fashion season. “There will be no more wars; we are now working together as a team to compete on the international scene. This year, for instance, a free shuttle bus drove buyers between White and MVM,” he said.

Trends from the young designers and small producers showcased at the event centered on ladylike Fifties and Sixties looks with an abundance of polkadots, pinstripes, colorful patterns and lace. Dresses and skirts replaced trousers — and buyers sought out higher waists, even for younger consumers. Fitted mackintosh raincoats were popular in taffeta and patterned lightweights, while Bermuda shorts offered an alternative to capri pants.

“Clothes have become more romantic and companies have become more cognizant of the importance of fit,” said Michael Skidmore, also of Searle, New York. “We’re seeing pretty blouses, cardigans, dresses and skirts and some wonderful prints with a nod to the Fifties and Sixties, but there’s also a virgin and the gypsy, funky modern Edwardian look going on. Although the euro-dollar exchange rate has improved, it is still an issue. But there is understanding on both sides and we usually find a way to work with vendors.”

Italian vendors confirmed sales to the U.S. have improved over the past few months.

Mirko Ghignone, owner of knitwear and apparel producer Avant Toi, said the 4.5 million euro, or $5.4 million, line now sold around 15 percent of its merchandise to 25 stores in the U.S. (up from 20 last season), including Saks Fifth Avenue and Fred Segal. “Blake, Chicago came by, and we expect to receive more orders for our double-dyed air-brushed sweaters in 12-ply cashmere from U.S. clients in Paris,” he said.

At L’Autre Chose, sales and marketing director Simona Severini said she hoped that increased interest from U.S. buyers would translate into sales for the two-seasons-old clothing line.

“We have an established shoe line that sells at Neiman Marcus, Bergdorf Goodman, H. Lorenzo, Nordstrom, Marshall Field’s and other U.S. stores — representing 20 percent of our total turnover,” she said. “Now we’re hoping that some of these stores will pick up on the clothing line.”

At the two-seasons-old Hood line, owner Rita Cappannini said Tender of Michigan had placed a substantial order during the fair. “We now sell in over 120 stores and aim to expand to 200 retailers worldwide by next spring,” she said. “Last season, our turnover reached 1.2 million euros [$1.5 million] and should rise to 1.8 million euros [$2.2 million] for the current collection.”

Miriam Balluga, owner of the four-year-old line D-Cln, reported that between White and the Milan showroom, the company had taken 30 orders and made 40 new contacts. “Our clothes are 100 percent made in Italy and U.S. buyers appreciate that,” said Balluga. “Having the factory and artisans nearby means that I can closely follow production and deliver on time.”

The classic bridgewear show MilanoVendeModa revamped this fall with a new look, trendsetting sections, a new logo and two issue-based conferences, on the “Chinese Shadow” and the role of commercial agents within the trade.

Held from Sept. 30 to Oct. 3 at the Milan fairground, the show attracted 9,646 buyers, up by 9.6 percent from 9,344 in the spring. Among them were 92 buyers representing 50 U.S. companies, including Peter Elliot and Searle, both of New York. However, vendor numbers declined once more to 273, down from 289 at the last edition.

“With the new design, we aimed to create a tranquil atmosphere that encourages buyers to spend,” said exhibition director Emanuela Forlin, who confirmed that Massimiliano Bizzi, who also designs the space at the trendsetting fair White, had supplied ideas for the new look.

In the luxury section, the stands resembled boutiques with dark wood floors and white stuccoed walls, while the new, trendier 1.1 and LT areas were inspired by the former factories and workshops where young designers often work. At 1.1, the transparent stands were in the foregrounded, and the rusted iron floor created a used look, said Forlin.

While not everyone liked the fair’s design, most of the reaction was positive.

“I liked the new decor, though part of the show was extremely hot [in temperature],” said Eileen Sorota, a buyer for Peter Elliot, New York. “I attended to see two vendors — including Camalgori — whom I have bought from before. I walked the show and found one other vendor. We are a high-end store and I do not think this show is for me.”

The fair also faces challenges regarding its future location. The Milan fairground pavilions where it currently shows are to be demolished following the recent inauguration of the vast new fairground by architect Massimiliano Fuksas at Rho outside Milan.

“Next February, MVM will show at the same location, but in fall 2006 we will probably move to the Portello, the most recently built section of the old Milan fairground, which will still be standing,” said Forlin.

However, she would not confirm Italian press reports that MVM could move to Rho in 2007 in conjunction with shoe and leather fairs MICAM and MIPEL. “The MVM team is working with various others to establish a new calendar,” she said.

Trends among MVM’s mostly classic exhibitors included feminine skirts and jackets in black-and-white patterned prints, jacquards or with embroidered effects. Navy also staged a comeback and apparel and knits had leaner, more tailored looks. While many stands in the classic luxury section were still showing gypsy looks with lots of sequins and embroidery, the more forward-thinking vendors had moved on.

In the 1.1 section, Riccardo Collina, marketing director for Camalgori by Ensemble, said he had seen an increased number of buyers from English-speaking countries — including the U.S., the U.K. and Canada. Between MVM and the company’s Milan showroom, he had taken more than 30 orders, but he said he felt the new exhibition space could be improved. At MVM, American buyers — including Peter Elliot — liked Camalgori’s ethnic-embroidered black-and-white silk-cotton skirts and double-face black-and-white jackets with a tailored look.

At She’s So, sales manager Nicola Nicolini said he had taken almost 50 orders at MVM. Buyers were selecting streamlined knits in linen or viscose with relief effects. Popular colors were red, olive, brown and black. The 9 million euro, or $10.9 million, company sells at 20 stores in the U.S., including Ultimo, Chicago; Melange, Santa Monica, Calif., and Takashimaya, New York — though it usually sees U.S. retailers in Paris.

At knitwear producer Marsil, in the luxury zone, sales manager Silvia Noé said she was happy with the new organization of the fair. “I love the new boutique look and visitors are pleased,” she said. “Though I saw few Americans at MVM, this season I have gained some new clients in the U.S.A., which now accounts for 15 percent of total sales. I have found a niche selling elegant looks to women sized 14-22, a segment that is often ignored.”

Home to four fashion fairs, the edgy Via Tortona zone — where Giorgio Armani also shows — has become the leading location for trend-setting looks in Milan.

Aside from White, fair organizer Efima runs two other shows in the area: Cloudnine for accessories and NeoZone for upscale classics and artisan-made looks. Over the past four seasons, Upside, an independent young designer show, has also established itself as a launchpad for new names.

Buyers appreciated the new NeoDesigner section, where nine artisan-produced designers showed their wares. At LiebeLei, an artisan producer of embroidered bags and apparel, designer Annalisa Gabrielli (formerly of Romeo Gigli and Antonio Berardi) said she had received orders from a Dallas boutique and from New York’s Museum of Arts and Crafts.

Despite her high price points (which range from 405 euros to 864 euros wholesale, or $490 to $1,045), London-based designer Sharon Walsh reported that her first collection of dresses and jackets in distressed antique and new fabrics had attracted interest from Paris’ L’Eclaireur and Peter Elliot of New York.

Down the street, the third edition of Cloudnine grouped 54 accessories brands (up from 39 last spring) including Eley Kishimoto Footwear, Roberto Del Carlo and Afritudine, by upcoming African designers. Among standout collections were footwear by Carlo Alberto, winner of this season’s Vogue Italia/Vogue America Who Is On Next award judged by Franca Sozzani and Anna Wintour, among others. Designer Carlo Alberto Pregnolato said he had received orders for his colorful lizard, crocodile and suede evening stilettos and platforms from Alan Bilzerian, Boston, and Madison of Beverly Hills. Saks Fifth Avenue and Neiman Marcus had also made appointments to see the three-seasons-old collection in its Milan showroom.

At the fourth edition of Upside in the Magna Pars exhibition space, organizer Takao Tsubouchi said that he now had more requests than he could handle from emerging designers hoping to show in Milan. Past success stories include Annalisa Gabrielli of LiebeLei, who was invited to participate in both Who’s Next Paris and the NeoDesigners section of NeoZone at the last edition of Upside.