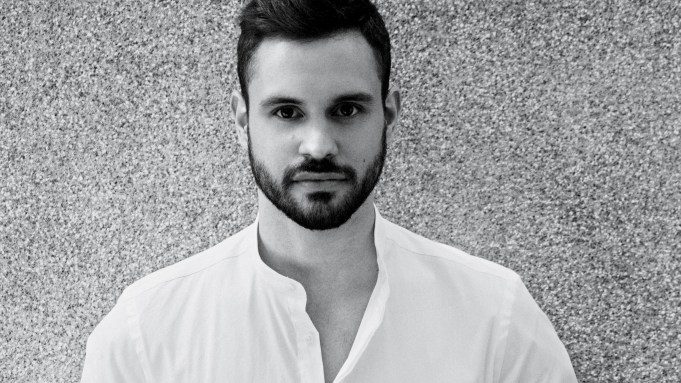 A graduate of IED, the European Design Institute in Rome, Salvatore Piccione won Vogue Italia’s talent contest “Who Is On Next?” in July 2014. This season, the Sicilian designer is hosting his first runway show.

The collection is rooted in a young, elegant aesthetic based on simple, feminine styles peppered with bold patterns in vivid colors.

For fall, Piccione said he was inspired by Paulo Coelho’s book “Brida,” which describes a woman’s personal spiritual journey. He created prints of an imagined city with flying balloons and hearts. “Through this collection, I wanted to express an optimistic message — that life is beautiful,” he said.

The line is strong on dresses, mostly A-line silhouettes, as well as coats cut in daring shapes. Most of them are embroidered for textured 3-D effects. The designer focused on lightweight fabrics like chiffon, juxtaposed with heavier ones, like tweeds and wools. The collection also offers thick embroidered sweaters and, for the first time, accessories including shoes, earrings and necklaces. The lineup retails from 250 euros, or $280 at average exchange, to 1,500 euros, or $1,690.

Raised in a family producing corsets, underwear and swimwear, designer Fiammetta Pancaldi started manufacturing her one-of-a-kind dresses when she joined her family’s business in the Nineties and soon began getting requests for special creations from couture brands.

A year ago, the designer moved her atelier into a former club in Bologna, where 10 seamstresses help her produce exclusive couture pieces. They also make the high-end Pancaldi ready-to-wear collection, which launched in 2015, by hand.

“When we moved into the new space, I had so many ideas and dreams,” Pancaldi said. “I thought about launching a line of day pieces, which had to be comfortable and make women happy.”

For fall, the designer reworked a maritime theme, such as handknit sweaters recalling those worn by Northern European sailors, while embroideries on tartan designs are inspired by the laces worn by women who, in a different era, stood at the ports waiting for their husbands to return from the sea. Everything is cut in elegant yet relaxed silhouettes, and the collection is positioned in the “accessible luxury” segment.

Italian high-end manufacturer Castor, which produces the collections of Antonio Marras and Giles Deacon in addition to its house brand Mantú, is introducing its contemporary women’s label, CM100, which takes its name from the centimeter — the unit of measure commonly used in apparel design.

“This label targets a woman who likes fashion but is not obsessed with current trends, who loves classic styles but looks for modern lines and cuts,” said Castor chief executive officer Angela Picozzi.

The fall lineup is strong in women’s staples — functional down jackets, chic peacoats and oversize capes in blanket-inspired patterns. Cozy knits are paired with denim, while suits feature mannish blazers. The brand also developed a printed motif inspired by paper patterns and embellished with flowers on feminine dresses. The palette runs from traditional wintery tones of blue, creamy white, burgundy and gray to brighter shades of yellow, orange, red and turquoise. Retail prices range from $230 to $650.

French ski specialist Rossignol, which launched its apparel division last December, is introducing its first women’s collection. Alessandro Locatelli, ceo, explained the idea behind the brand is incorporating its technical ski heritage into contemporary collections appropriate for both the slopes and the streets.

Along with sportier styles, including water-repellent and wind-resistant jackets with graphics recalling the reflection of the sky on the snow, the lineup includes parkas, kimono-inspired bombers and anoraks crafted from furry fleece, bouclé and wool matched with nylon and Neoprene. Elongated vests in wool and fur and are paired with metallic cropped pants, while knitted dresses have zipper details on the back.

To complete the look, Rossignol delivers footwear including boots lined with fur or with hiking-inspired details. The collection retails from 500 to 1,200 euros, or $565 to $1,350.

Bruno Magli is returning to the women’s game, which had been discontinued in the U.S. and Europe.

“The goal is to rejuvenate the image of the brand, delivering powerful styles that are also sexy and fashionable,” said Paul Vando, LJP International vice president of design and product development.

The first collection includes heels as well as flats, leather soles, signature hardware and the brand’s signature bow, elegant pipelines and ornaments. Styles are crafted from suede, glossy calf, metallic leather and exotic skins. “There are a lot of combinations,” said Vando, who revealed that the company also reworked its classic men’s spectator for women. The collection, which retails from $450 to $1,200, is worked in subdued shades of nudes, black, brown and burgundy, played against tones of bright blue, yellow and green.

“We want to be strategic with distribution, targeting only the best retailers,” said Cory Baker, chief operating officer of Marquee Brands LLC, adding that the debut collection is expected to hit between 20 and 30 American stores, and that Bruno Magli is opening about 60 stores across China, the U.S. and Europe within three years. Baker said Lucy Liu will appear in the brand’s fall campaigns. “Lucy is also customizing a specific shoe, which will be on sale next holiday season.”

Gentucca Bini comes to the fashion scene with an impressive pedigree and résumé. The grand- daughter of couturier Bruna Bini, the designer studied architecture in Milan and Paris, where she worked in the atelier of Pierre Cardin, along with assisting fashion editor André Leon Talley. Then, Bini started collaborating with Karl Lagerfeld on hats for Chanel couture, before becoming Romeo Gigli creative director.

“I arrived at a point where I wanted to create some distance from the past and start something from zero,” said the designer. The result was the uniform-focused label she launched two years ago. “I wanted to start with uniforms because I think elegance is real when it’s combined with comfort.”

After three seasons presenting only coveralls crafted from luxurious cotton, wool and silk fabrics, this time Bini will offer a broader lineup. “I actually deconstructed coveralls to create pants, jackets and coats with proportions that convey the best functionality.” Bini worked a range of precious fabrics, such as casentino wool, printed silk, linen and cotton — mainly in a palette of yellow, blue and black — as well as Japanese denim. The fall collection wholesales from 190 to 350 euros ($215 to $395).