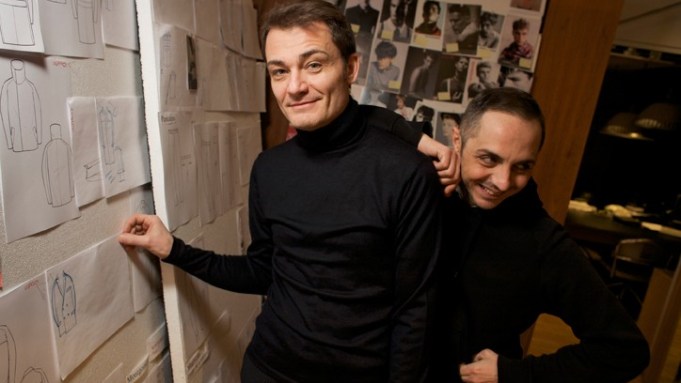 Easy does it. That’s the mood here as the city, hit by a cold snap, preps for Milan Fashion Week. And given the global recession, forget glitz, hype and pomp  as designers opt for realism over surrealism.

A Pambianco study issued Wednesday confirmed fashion and luxury goods companies  are in for a tough first half, stressing that the dismal outlook makes everyone hope all the investment in overseas markets will generate results.

“Regardless of the year-end mini rally, the evaluation of publicly listed fashion companies is at historical minimum, with a drop in profits of between 30 to 40 percent expected for 2009,” the report stated.

It’s no surprise, then, that the schedule is a day shorter versus the original plan of five days, primarily the consequence of dropouts. Fendi, Marni and Valentino all nixed runway shows in favor of low-key presentations, some for buyers only. Among the numerous designers who went from a fashion show to nothing are Romeo Gigli, Antonio Marras, Krizia Uomo, Laura Biagiotti and Calvin Klein, who will show in New York. Overall, 18 shows or presentations were canceled altogether. There are still newcomers to watch, though, from John  Varvatos making a return to Milan, to Tommaso Aquilano and Roberto Rimondi launching their first men’s collection for Gianfranco Ferré. “There is always a  bit of risk involved when doing something for the first time, but that’s the role of the designer: to propose new ideas and [in this case] to find a balance  with Ferré’s history,” Aquilano said.

Olivier Gerber, sales and marketing director at the Four Seasons in Milan, said  the hotel is seeing a 20 percent drop in reservations compared with the same period of last year. “Most people canceled very early in time, but we’re certainly feeling the impact of a smaller U.S. presence because it was the market with the strongest turnout,” Gerber said.

Visitors most likely won’t get to see the city blanketed in white stuff, as it was recently because snowstorms aren’t on the horizon. But that still doesn’t mean getting to and from — or around — Italy’s fashion capital will be easy. For example, Malpensa airport has seen the number of direct flights cut back now that Air France has taken a stake in Alitalia, so landing there will be more challenging than ever. Buon giorno!