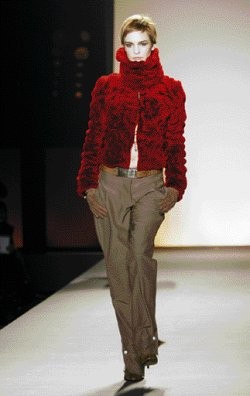 Salvatore Ferragamo: In his second season at Ferragamo, Graeme Black shifted his ethno interest from exotic tropical climes to St. Petersburg, according to his program notes. This was not, however, a Cossack romp. In fact, it wasn’t a romp of any sort. Unfortunately, Black took a wrong turn somewhere on the bumpy road between those two destinations, losing many in his audience along the way. While interesting pieces were scattered throughout, the collection itself was overcooked.

What worked for fall included Black’s less-strained looks, a sexy polo top paired with a dotted flyaway skirt, a silver astrakhan jacket and silver satin miniskirt as well as simple but luxe items like a striped fur jacket with dramatically belled sleeves or a croc jacket worn with a chiffon miniskirt. But other pieces — pants made from spliced bands of croc, a full-length, cherry red fur cape — buckled and broke under the weight of too many ideas.

Just who the Ferragamos are hoping to seduce with the house’s wares is still in question, and so is whether Black can lure her to the cash register.

Roberto Cavalli and Just Cavalli: Roberto Cavalli’s muse is a whole lot of woman. Last season, she showed off her hyper-feminine side, and, while she may seem delicate at times, deep down, she’s a turbo-charged vixen. For fall, she’s dropped the damsel act and is set to star alongside Vin Diesel in his next techno-thriller, armed only with a wardrobe flashy — and sexy — enough to disarm any red-blooded opponent.

To suit up this most fashionable action heroine: slick minidresses short enough to make a Bond girl blush, stirrup pants, thigh-high boots and a skintight leather jumpsuit à la NASCAR, complete with a “Goddess” patch on the back. But for this special agent, going undercover is not an option, because no one will ever lose sight of this chick, especially when she’s dressed in paillette-covered neon brights. In fact, this season, a black bolero sparkling like a slick stretch of asphalt and worn over a purple satin corset and sequined blue jeans is as discreet as it gets.

There was plenty of daywear — at least for those who begin their days after dark — and for the live wire on her way to Las Vegas, or Hollywood, Cavalli also showed scores of evening gowns, variously plunging, slit or followed by trains. These were simply outrageous. It takes a certain kind of girl, however curvy and adventurous, to commit to spending a night in a silvered suede gown with a Harley-type eagle spreading its wings across her back.

At the Just Cavalli show on Saturday night, however, the clothes suggested a different kind of commitment — the kind of committed where they come and take you away, ha-ha. Clownish clothes and camouflage are not so funny at a 10 p.m. show, however. While some items were fun, including cute parkas, army jackets and silly knits, Cavalli’s riotous combinations could make Bootsy Collins look conservative. It was all a blur.

Jil Sander: Where to begin? Maybe that was Milan Vukmirovic’s question, too, as he set out to design the Jil Sander collection this season. His successes at the house have come in fits and starts. Season after season, his strengths and weaknesses have been dutifully noted, and yet Vukmirovic hasn’t really knocked anyone’s socks off — ever. This show began promisingly enough, with a patent leather motorcycle jacket over thin-as-a-pin black pants and a fuzzy sweater paired with a double-tiered skirt in sparkling black plaid. Then came a fur jacket trimmed in patent with a black miniskirt. Not bad, not bad at all.

But, as it has happened time and again, Vukmirovic did his best, and the collection got away from him. Though relaying the results of his efforts is a heavy task, truth be told, the clothes looked neither luxurious nor new. Dip-dyed sweaters were droopy and dull. A rock T-shirt finale played off of a trend that was finito seasons ago. The list could go on, but why linger? Those editors and retailers who need to find something to love about Vukmirovic’s rock ’n’ roll-inspired collection will. But as Jil Sander herself well proved, luxury is never about needing. It’s fueled by beauty, whimsy and infatuation.

Brioni: Sixties. Eighties. Everyone seems to be spinning those decades in Milan this season, and designer Fabio Piras is no exception. He was working the theme at Brioni in silhouettes he describes as “sporty but eccentric, almost kitsch.” That translates into slender coats and suits in patchwork patterns, plaids and even a shiny herringbone; lots of padded shoulders, and, for that touch of luxury, chinchilla collars on coats. In just three seasons, Piras seems to have developed a following for his style. Umberto Angeloni, chairman of the company, said, “We’ve seen a constant progress in numbers with this line, as it evolved from a haberdashery look to one that’s more feminine and trends-oriented.”