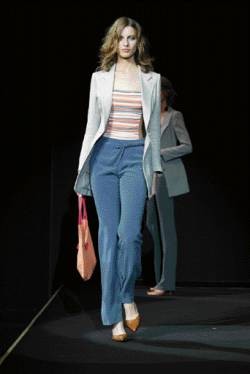 It was cool and calm at Giorgio Armani, where his real-clothes approach carried the day. Gianfranco Ferré went his own sharply tailored way. There were tropical influences at Salvatore Ferragamo, while, at Jil Sander, things got a bit zippy — so to say.

Giorgio Armani: Take a cold shower and get real. That was the message of the graceful, calm collection Giorgio Armani showed on Monday afternoon, a pleasant respite from all of the heavy breathing steaming up the Milan runways this season. Sure, sex is great. And dressing for the anticipation of sex is great. But darned if most women don’t have some other things to do at least some of the time. And they have to get dressed for those moments, too, a salient reality that Giorgio Armani never forgets. Here he gave them plenty from which to choose, clothes with a quiet sensuality of their own.The calm, however, was only found on the runway. As usual, Armani had two shows to accommodate his crowd, and outside some people got a little testy as they started to congregate for the second show before the first one ended. Even some of Armani’s star power couldn’t best his fashionable lateness. Mira Sorvino, Kim Cattrall and Kristin Scott Thomas — the face of Armani women’s ad campaign for spring — stepped out of their cars way too early. So did Australian Olympic gold medal swimmer Ian Thorpe, who proved something of a curiosity; people knew he was somebody, but didn’t know who. Those celebs finally took their front-row seats (actually, Ian was bumped to second) along with a host of other luminaries. Sophia Loren and Tina Turner acted like perfect ladies, while the girls in the peanut gallery — Anna Friel and Joely Richardson — acted like anything but, talking and yucking over the music through the entire show. George Clooney — well, he was perfect.On the runway, the sedate attitude felt fresh, especially since Armani worked deliberately upbeat colors — lavenders, pinks, blues — into his palette. Beyond that, he offered all kinds of options — this is a man who edits with caution. He opened with fluid gray suits worn over bright patterned camisoles, polished yet relaxed. Then, he mixed things up — cropped and curvy leather jackets over silk pants, contrast-banded numbers in bright color mixes paired with baggy pants, or long jackets over hobble skirts so treacherous the models could rarely negotiate them — an odd move from Armani. There were a few other tricks, as well, notably some pants with ruffled flies, but such lapses were rare. For evening, Armani showed some relatively simple columns with twisted straps. He then gave in to his love of exotica with multiple layers of lavish embroideries — a well-controlled boho moment.

Gianfranco Ferré: When Gianfranco Ferré acknowledges the trends du jour, he does it like a king giving a little wave as he passes in his carriage. He doesn’t delve into the newest-latest as some do; he does his own thing. And this time he did it very well indeed, with plenty of that Ferré verve but less of the over-the-top excess this designer too often embraces.His ladies love Ferré’s whip-smart clothes, and for spring he showed plenty, all the while picking up on two of the season’s major trends — the sportif movement and the Asian motif. That way, the strong Ferré woman can maintain her signature arch look and still keep au courant, too.The designer perked up classic suits, binding a black jacket with stark white like a team uniform, and showed a slinky maillot and siren gown, both in sportif stripes. Moving along seamlessly into the Eastern territory, out came obis galore. An enlarged lily-printed, obi-cum-bustier was shown under a jacket, while another was made into a saucy miniskirt. But his most clever take on Asian merged tuxedo and kimono, giving a tuxedo jacket robe-like proportions and using a classic Japanese print on the lapel.Still, for Ferré trends are mere playthings. He turned his back on the here-and-now for evening, favoring satin and chiffon gowns that were timeless.

Jil Sander: With all the zippers running rampant through Milan Vukmirovic’s spring Jil Sander collection, you would have thought that YKK sponsored the show. He started out with dresses that zipped — or unzipped, if you prefer — both on a diagonal and right across the middle, a white trench with a zip-off sleeve and a miniskirt made from bands of zippers — so a girl can show off a sliver of skin here or there, as she dares.These all looked good and had a hard, sexy edge that brings a new electricity to the collection. But if Vukmirovic isn’t beholden to the zipper industry, then why send out an awkward shell made of zippers woven like a basket, or a dress that was a cage of zippers that bulged and buckled and ended up looking like a butternut squash?No matter. Soon Vukmirovic was on to bigger and better things, turning jock and working a techno-athletic aesthetic. The vibe was sporty and sleek, with a silky anorak or pullover windbreaker paired with skinny, cropped track pants and sassy little athletic mesh mini-dresses galore. For evening, Vukmirovic took inspiration from the Harlem Globetrotters, showing gold-beaded tanks and baggy, shimmering satin shorts full of team spirit. While it all left the old Jil Sander customer in the dust, this was Vukmirovic’s best collection to date. Is his best good enough? Well, only time and Mr. Bertelli can tell.

Salvatore Ferragamo: The new man at Salvatore Ferragamo, Graeme Black, brought a little tropicalia and a lot of Giorgio Armani to his debut collection. The former Armani disciple hasn’t yet cut the cord, and both his clothes and his presentation style — models walking boy-girl and holding hands down the runway — owe a debt to the master, who was sitting in the first row at the show.In evergreen, deep blue and a range of neutrals, Black brought a trace of the jungle wildness to his sportswear, showing snakeskin blazers and some prints that resembled the intricate patterns of Maori tattoos. He also worked a majorly Armani pareo-sarong theme, showing long-wrapping skirts with small tops, a sheer, tropical-scarf print poncho over pants and chiffon dresses covered in abstract orchid prints, along with sparkling wrapped eveningwear.While models in the eveningwear segment posed at the end of the runway en tableau, this was not some carefree romp. Black’s clothes are built to wear, and the suedes and leathers he showed — a banded leather jacket, a tan suede wrap skirt — were particularly nice. That said, however, he still has a way to go before considering Ferragamo revived. This house has had a revolving door of designers over the past few years, which has kept it from developing a signature look. Black has his work cut out for him, but with his résumé, he should be up to the challenge.