Milan Preview: On The Lookout

Names worth watching include Caterina Gatta, Made with Milk and Coliac. 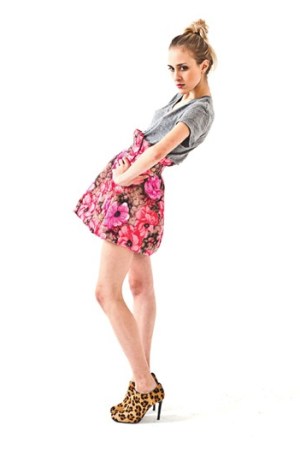 The brand: Becoming a designer was not on Caterina Gatta’s to-do list until she assisted a fashion reporter during Milan Fashion Week in 2007. For the occasion, she made herself a couple of dresses with a colorful designer vintage fabric, which garnered such positive feedback that in 2008, she decided to start her own brand. The first collection was presented at the Soho House New York in May 2009.

The 27-year-old, who holds a degree in fashion and costume sciences from Sapienza University of Rome, uses only original vintage fabrics from some of the most significant names in fashion, including Gianni Versace, Yves Saint Laurent, Fausto Sarli and Valentino, among others.

“The pieces are one of a kind because the fabrics that I find are never longer than 20 meters,” explained the designer. “I really like the idea of creating something that is not bound to trends and that is different from the minimal mood of contemporary fashion. The materials are colorful, funny and have a baroque touch.”

To focus attention on the fabrics and prints, Gatta delivers basic, clean silhouettes, sometimes made quirky with the unconventional use of big origami-inspired, three-dimensional details.

What’s in store for fall: Heavy organza high-waisted miniskirts covered with 10 different printed silks; a short dress made with a white Versace fabric from 1997 with matte pop hearts along with a cape; a skirt and a cropped jacket in a warm textured cashmere-lined cotton from Fausto Sarli.

The line is available at Change of Season in the East Village and at P.S. Post Script Couture in the Meatpacking District in New York, and retails from 400 euros, or $1,370 at current exchange, for a silk-trimmed cashmere maxi sweater to 2,000 euros, or $2,742, for an evening dress.

Where and when: Caterina Gatta makes her debut at Milan Fashion Week with a presentation during the Vogue Talents Corner event, Feb. 23 at Palazzo Morando, 6 Via Sant’Andrea.

The brand: Friends and fashion fans since childhood, Chiara Pochetti and Vera Facchetti launched Made with Milk last year with a tiny spring capsule collection. Both fashion industry outsiders, they wanted to transform their passion for clothes into a real business.

Inspired by the location of their meetings — Biancolatte (“white milk”), an all-white cafe in the heart of Milan — they designed pieces made, literally, from milk. The fiber is made of milk casein obtained through bioengineering methods, and it’s mixed with other fabrics including tulle, silk and wool.

What’s in store for fall: The 45-piece collection consists mainly of short girly dresses in a coffee shop-inspired color palette: cream, cappuccino and a strawberry-milkshake pink. There are also jersey crepe ruffled dresses with short balloon sleeves, and a silk model featuring tulle degrade roses. A supersoft cashmere and wool knit poncho has a detachable collar, and everything comes with a bag of vanilla-flavored puffed rice and a portrait of the designers as children.

The collection is available in boutiques including Brian&Barry in Milan and Jasmine in Florence. Prices range from 200 to 350 euros, or $275 to $480.

The brand: Armed with a degree in fashion design at University of Urbino Carlo Bo, Francesca Biondi worked in children’s wear and accessories before becoming assistant designer at Marni in 2008. “It was a great experience because I had the opportunity to be in close contact with Consuelo Castiglioni’s creativity and learn the technical bases to develop my own collection,” said the 26-year-old designer. In 2010, Biondi won the Next Generation competition, promoted by the Italian Fashion Chamber.

What’s in store for fall: As the name of her debut collection, “16 shades of gray,” implies, the star of the runway will be the color gray “which, according to scientific studies, can be perceived by the human eye in 16 different tones,” explained the designer. The lineup comprises a mix of asymmetric, voluminous shapes and minimal, clean lines. Slim pants and ultra-short miniskirts are paired with tops in vintage lace-inspired laser-cut technical fabric. Biondi also played with knots that create rich drapes on shorts and dresses.

Where and when: Francesca Biondi shows March 1 at 1 p.m. at Palazzo Clerici, 5 Via Clerici.

The brand: Designer Martina Grasselli, a 2006 graduate of Nuova Accademia di Belle Arti Milano with a degree in fashion and textile design, started her career with an internship in the jewelry division at Stella McCartney. She started her own jewelry and accessories line in 2009, called Coliac.

“Coliac is my maternal grandmother’s last name and I wanted to preserve that in some way,” said Grasselli. She added that her passion for this particular area was passed down from her mother and grandmother, who used to collect fun jewelry when she was younger.

The brand is marked by geometric shapes and influenced by Russian deconstructionism and futurism.

What’s in store for fall: The fall collection, dubbed “Dentro l’acqua” (“within water”), is inspired by the sea and includes necklaces, rings and bracelets along with gloves and belts. The designer chose Bakelite, plastic, brass and wood in shades of gold, gun-metal gray and a dash of bright enamel for the jewelry while the leather goods are made of pony skin, mink and napa leather embellished with studs.

Prices run from 80 euros, or $109, for a bracelet to 300 euros, or $409, for a necklace. The collection will be available on yoox.com and thecorner.com from the end of this month.