Italian designers are banking on good planning this season as they cope with the whammy of an earlier-than-ever Oscars. 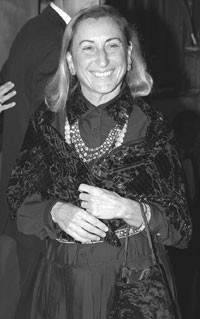 MILAN — And the winner is…good planning.

At least that’s what Italian designers are banking on this season as they cope with the whammy of an earlier-than-ever Oscars.

As noted, the decision by the Academy of Motion Picture Arts and Sciences to move up the Academy Awards to Feb. 29 has created havoc with Milan Fashion Week, which runs from Feb. 22 to 29, and is now scheduled to fit in more major designers than ever early in the week. Italian fashion houses have denied this is connected to the Oscars, with the exception of Versace, whose show was originally scheduled for Feb. 29 and will now be on Feb. 26.

“We have a team in our Beverly Hills flagship, but we’ll thus be able to focus on each event and have our best seamstresses from Milan fly to L.A. after the fashion show,” said a Versace spokesman.

As reported, Missoni will prepare a full collection dedicated to the red carpet, and fashion houses such as Gucci, Gianfranco Ferré and Dolce & Gabbana have teams in the U.S. who maintain relationships with celebrities and arrange fittings.

A Giorgio Armani spokesman said Monday that there “really is no pressure” for the designer to personally be at the Academy Awards. “Mr. Armani supervises from Milan, and he is currently in talks to dress certain presenter friends of the house,” he said. Armani was one of the first designers to establish a fully staffed VIP showroom. “There are four people supported by tailoring seamstresses in the Giorgio Armani boutique in Los Angeles, who work with actors and offer personal services and outfits for the Oscars,” said the spokesman.

While the official schedule is not complete, it is beginning to take its final shape. Armani will kick off the Milan collections on Feb. 23, presenting two shows for his signature line at his theater in Milan. The following day, the designer will show his Emporio collections, also at the theater. His Faces of Sportswear exhibition, which was presented during the men’s shows this month together with his photographic book, will run till March. As usual, the designer plans to host a dinner the night of his Giorgio Armani show with special guests, whose names are still not confirmed.

On the Monday, Armani’s show will be followed by Alberta Ferretti, the new Pollini collection designed by Rifat Ozbek, the young line GF Ferré and Stephen Fairchild. While the following morning will be slow, in the afternoon the two Emporio Armani shows will be followed by the first Bottega Veneta show and the two Prada shows.

Milan Fashion Week also revolves around Gucci’s pivotal midweek fashion show, when creative director Tom Ford will take his last bow on the house’s runway. The show will be held on Feb. 25. at 7:00 p.m., and tentatively follows Max Mara, Pucci, La Perla, Sportmax, D&G and Moschino Cheap & Chic. Sources say Gucci is planning a party for that evening, which would mark a significant departure from previous seasons. Gucci usually holds parties only during the men’s shows.

Industry sources also say that Romeo Gigli was planning a comeback show that day but, due to organizational problems, may return to Milan next season.

Dsquared will probably be the first show on Thursday, Feb. 26, followed by Mariella Burani, Trend Les Copains, Anna Molinari, Fendi, Trussardi and the two Jil Sander shows. That evening, Donatella Versace will show her signature and Versus lines together once again in the house’s Via Gesu’ palazzo. “This offers additional exposure for Versus and we’ve seen results not only in publicity but on the commercial side as well,” said a company spokesman. Versace will also hold its traditional post-show party with the requisite — although yet-to-be-confirmed — celebrities.

Friday, Feb. 27, is still quite tentative with Roberto Cavalli, Iceberg, Gianfranco Ferré, Krizia and the two Miu Miu shows. The following day — 24 hours before the Oscars — will likely start with Blumarine, followed by the two Dolce & Gabbana shows, Salvatore Ferragamo, Moschino and Burberry Prorsum. And Oscar day itself is relatively light, with Missoni the only major name expecting to show.

Milan originally was expected to end on March 1. As noted, there was an effort by the U.S. fashion press — led by Vogue editor in chief Anna Wintour and Patrick McCarthy, chairman and editorial director of WWD’s parent Fairchild Publications, who sent a joint letter to most of Milan’s designers asking that they move their shows as early as possible — and designers generally have avoided the actual date of the Oscars. And an industry source said Milan’s Fashion Week is in line with the agreement stipulated between the Italian and French fashion associations. “Milan is really full, so [Mario] Boselli [president of the Italian Chamber of Fashion] is happy and with Paris [Fashion Week] kicking off on March 3, since not many [from the fashion press] go to the Oscars and they clearly don’t want to wait around or go back home to the U.S. or Asia, they’ll go directly to Paris.”