As the lockdown eases in Italy, Milan's stores reopened their doors on Monday, but consumers are still safe at home.

MILAN — This was a soft reopening for Milan — forget crowded streets and tons of shoppers.

With the lockdown considerably easing in Italy, stores, bars and restaurants finally got the green light to reopen their activities on Monday. But in Milan, while the traffic in the streets significantly increased, the amount of people circulating in the central shopping areas was still quite limited.

A city deeply hit by the coronavirus emergency, Milan is slowly and cautiously returning to normal, or better said, a new normal that means the use of face masks and hand sanitizers, the respect of social distancing and temperature checks in most of the stores.

With most employees of companies that have offices in the center still working from home and in a city empty of tourists, on Monday morning the streets around the Duomo and the Galleria Vittorio Emanuele II arcade, as well as the Golden Triangle luxury shopping district, were busier with couriers and cleaning crews than actual shoppers. And while a large percentage of luxury brand flagships were open, high-end cafés, including storied meeting points such as Cova and Sant Ambroeus, as well as hip bakery shop Marchesi, were still shut. 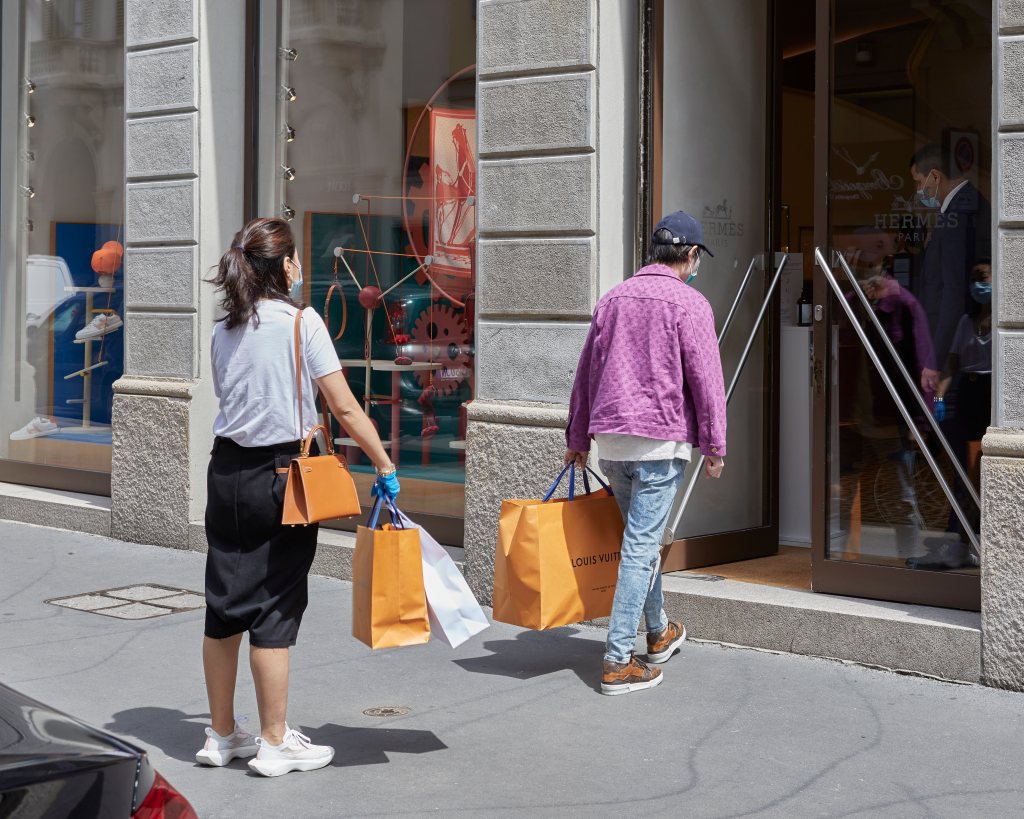 While locals seemed to be more focused on affordable purchases, especially at Zara and Nike shops on Corso Vittorio Emanuele, where Italian department store Rinascente also opened its doors with an efficient entry control system, the few shoppers approaching luxury flagships were mainly Asian. Unfortunately, none of them was able to give comments in Italian or English.

“I bought three tank tops, very basic, since money doesn’t go very far these days…it was just to scratch an itch,” said Giorgia Maestri, who made her first post-lockdown in-store purchase at the Zara flagship on Corso Vittorio Emanuele. Asked about the experience and the safety measures in the store, she felt positive. “They give you gloves, there is hand-sanitizing gel everywhere. However, there are not many people in the stores now; we will see what’s going to happen when they get crowded,” she added.

Encouraged by discounts of between 10 and 20 percent, Stefano Mori and two friends bought 10 pairs of sneakers at the Nike store on the same street, while in a very quite Galleria Vittorio Emanuele two women living in the area were checking out the windows of the Tod’s store.

“It’s the first time we’ve really gone out to check the stores,” said Cornelia Bianchi. “Even if we are not sure about what to buy due to the situation.” While her friend Laura Rossi said she was in the mood for a new pair of sandals, Bianchi revealed that books are still the priority for her. “We are very cautious going out, I think we will still spend a lot of time at home,” she said.

The tiny, charming streets of the Brera and Garibaldi area seemed a bit more vivacious, with people having espressos seated at the outdoor tables of coffee bars. 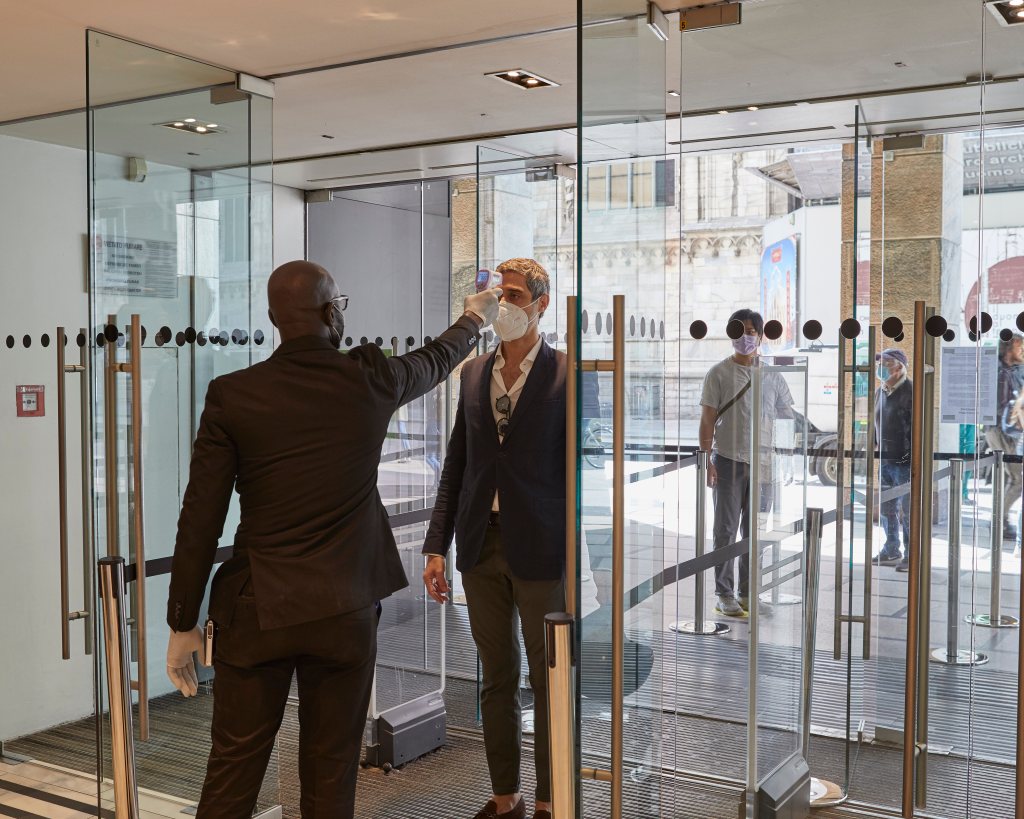 “We are feeling the warmth of the neighborhood, people are coming to say hello and wish us good luck,” said Laura Poretti, the owner of the Milaura luxury multibrand fashion store, which reopened on Monday. “The past two months have been really hard, we did our best to keep our consumers engaged through the web site and the social media platforms. Me and my team are so happy to be back at the store. We really missed it. I’m aware that the restart might be slow, but I feel positive and we already welcomed some clients today and they actually shopped.”

As many retailers, Poretti had to rethink the store space to guarantee distance for customers, who will also have the chance to book private shopping sessions in a dedicated area of the store. In addition, Poretti created customized face masks and hand-sanitizers for those making purchases. “I think Milaura is ready to face this new phase. We can’t wait to show our consumers the spring collections, which have been in the warehouse for too long. It’s not an easy moment for entrepreneurs, but we can make it…with passion and dedication.” 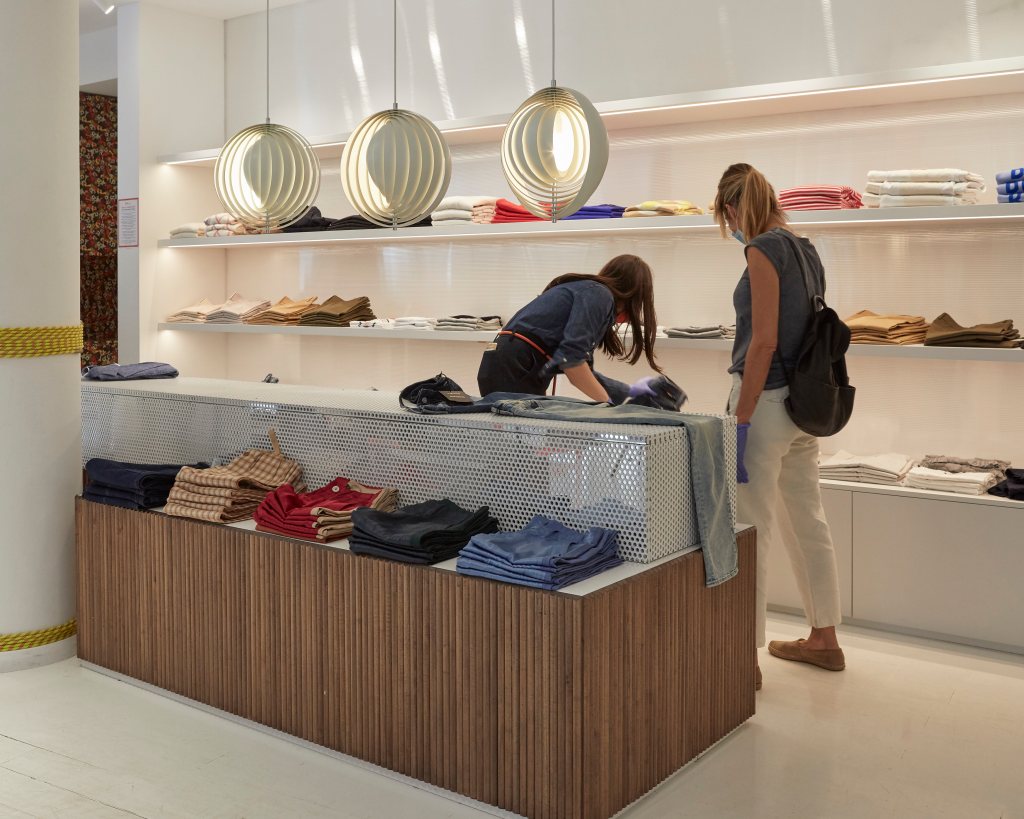 Inside the Milaura luxury multibrand store in Milan.  Giacomo Colombo/WWD

Those who haven’t been able to go back to business on Monday are peddlers, which protested in front of Milan’s city hall, lamenting a two-month stop of activities and zero information. “They have to tell us what to do, when we can restart, we need to go back to work, also because the government has totally forgotten us, not giving us any financial help,” said one of the 200 protesters, Liviana Colaianni, who sells olives and other delicatessens at local outdoor markets. Following the protest, the city municipality promised peddlers they will work on a plan to reopen all the outdoor markets next Monday.