MILAN — A sharper focus on the classic bridge market by well-established companies defined the revived MilanoVendeModa fair, held for the first time since 1989, from Feb. 28 to March 3 at the Milan fairgrounds. 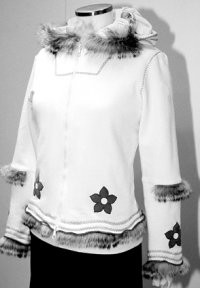 MILAN — A sharper focus on the classic bridge market by well-established companies defined the revived MilanoVendeModa fair, held for the first time since 1989, from Feb. 28 to March 3 at the Milan fairgrounds.

This story first appeared in the March 20, 2003 issue of WWD. Subscribe Today.

American buyers shopping for stand-out wardrobe items — including sporty leathers and knits with hand finishes — confirmed that the product range was more focused than at the Moda Milano fair it replaced. Expo CTS, the organizer of MVM, previously produced MoMi with Efima.

Still, 11,310 buyers made it to the show, including representatives from Lane Crawford, Saks Fifth Avenue, Barneys New York and Takashiyama, according to Expo CTS, although the number of U.S. buyers was down slightly. There were 335 exhibitors, mostly Italian firms.

“This year’s fair included the experimental O-Zone and trendsetting Light sections, but we want to be known as a fair that does business,” said Armando Mammina, director of Expo CTS. “Most of the companies that show here are well established. Our exhibitors know the reality of the moment, and presented competitive collections that will help them remain on the market.”

To spark their assortments, even in tenuous times, retailers were searching for novelty.

“I come here for unusual, high-quality items, such as fancy knits, that can be combined with simple pieces,” said Starr Kondos, owner-buyer for Starr Couture, a by-appointment-only store that caters to a high-end clientele in Barrington, Ill., near Chicago. “Many of my customers require larger sizes, so I’m looking for pieces with looser fits. I have noticed a lot of ivory and military looks.”

Other trends included sporty or military-influenced knits with zippers, high welts, handknit cuffs and collars, cargo pants and the return of culottes. Brown and cream with brighter flashes are the dominant shades for fall.

Vendors like Flavio Nava, general manager of knitwear company Tricot Chic, said, “We have worked well and have seen several U.S. clients from independent boutiques. Paris, however, is becoming the focal point for bridgewear.”

At knitwear producer Marsil, sales manager Silvia Noé said despite the change in organization, her company was satisfied with MVM. The $10 million Marsil is known for its contemporary-meets-classic styles.

“We’ve seen a wide range of clients, but I think the fair needs livening up with fashion shows and events,” she said, adding that organizers were considering doing just that. Like Nava, she said classic knitwear styles are undergoing a change in mood.

“Classic looks are in crisis because most women already have everything. American women, especially, want informal and practical looks,” she said. Luxury sportswear — like a camel-colored cashmere jogging suit with sequin details — is one answer. The look is also suitable for plus sizes.

Nicola Nicolini, owner-designer of She’s So, observed, “Many [U.S. buyers] are putting off making the final order until they see what happens in Iraq.”

He said, however, the global economic and political situation has had little effect on his company, whose volume was $8 million in 2002.

This year’s collection included signature sculptural pieces spruced up with new colors like chocolate and Tibetan red. “Our extrawide skirt-pants [long culottes] are selling well, and are the first thing our clients reorder,” Nicolini added. The line is carried by retailers including Ultimo in Chicago and A1 in New York.

In the Light section, sales and communication manager Lella Guarnerio of three-year-old leather firm Designer Industry, said 80 percent of orders were for classic pieces with unusual details, like a cream military coat in fake suede, with semispherical silver buttons and a short, silver blue lining, wholesaling at $227.

Concurrently, buyers crowded the aisles at the second edition of the trendsetting White fair.

More than 6,600 visitors, including 5,297 buyers, attended the show, up 34 percent from the last edition. Exhibitor numbers also increased to 145 from 108 last fall. Half the vendors were non-Italian and they included Britain’s Joe Casely-Hayford, France’s Antik Batik and the U.S.’s Diane Von Furstenberg. The show was held at the Superstudio Più in Via Tortona.

Sporting looks ranging from woolly ski berets worn with combat gear to floor-sweeping turquoise coats, visitors were almost as eye-catching as the apparel they had come to view. According to vendors, international buyers included representatives from Barneys, Ultimo, Antoinette in Santa Barbara, Calif., and Takashiyama.

“Buyers suggest that we maintain the number of exhibitors at around 150, offering a selection of trendsetting companies,” said Luigi Ciocca, president of organizers Efima. “And that’s what we propose to do.”

Trends varied from more feminine military looks to romantic, sporty styles. Miniskirts and dresses, combat pants with zipper features, bomber jackets and knits with high, ribbed welts were all popular. Sequins and buttons — whether original vintage items, or in unusual materials like reindeer — were prominent on leatherwear and knits. There was also less seasonal distinction than in previous years, with lightweight materials such as silk georgette being proposed for fall-winterwear. Colors — particularly on Italian stands — had quieted down, with racks of brown, beige, stone and cream enlivened with dashes of indigo, fuchsia and antique pink.

“We’ve made several new contacts,” said Pierre Caffaggi, partner in Flu’s Ear, which turned over $1 million last year. “We already sell 5 percent of our apparel to the U.S. and have seen representatives from Barneys, Takashiyama and Bloomingdale’s.”

“We’re happy with the fair, although buyers are taking longer to think before purchasing and consumption is down,” he said.

Grazia Castiglioni, showroom and sales manager for conceptual knitwear firm Liviana Conti, said, “Clients want special pieces that will last over time.” Henri Bendel ordered a range of simple knits, like a cross-shaped sweater with hood and kimono sleeves. Key Colors were gray, black and cream with dashes of fuchsia.

Assistant brand manager Paola Rossi of Block 60, produced by Iceberg’s Gilmar, said buyers had appreciated the select range of companies at the fair. “We also showed at White when it was a part of MoMi at the Milan fairground, but prefer this location,” she said. The $2 million company sells to Fred Segal in Los Angeles and Macy’s West, among others. Harem pants, military coats and skirts with jungle-print linings and an optical T-shirt in chocolate, gray and cream were among key designs.

At My Favourite Trousers, owner Maria Pia Bernardis said buyers seemed to appreciate the concept behind the year-old line, which aims to use a rotation of young designers. This season, U.S. designer Joey Thyne created military trousers softened with handprinted flowers. Fitted, feminine overalls in stone or blue gray were also strong. The garments, which wholesale at $54 to $120, retail in 90 sales points worldwide.

Designer Micha Layl of Florence-based L’Essentiel said his firm’s eccentric boho styles sell better in Italy and Japan than in the U.S. Prewashed, aged dinner jackets worn with Thirties-style silk shirts and skintight pants with ankle zips were among the stand’s most striking looks.