“What we found was that a lot of these incredibly gorgeous 27-year-old Indian-American and Pakistani-American women are auditioning for a 15-year-old girl’s part,” said Mindy Kaling of her search to fill the role of the protagonist in her upcoming, untitled Netflix series.

“And in most teenage shows, that’s actually what happens for labor reasons,” she continued. “They get a lot of people who are older and more beautiful, which is why every teen show is, like, all 30-year-olds pretending to be 16.”

Inspired by her own childhood, the coming-of-age comedy — expected to be released in the spring of 2020 — centers on the life of a teenage girl, Devi, a first-generation immigrant. The worldwide, open casting call brought out more than 15,000 hopefuls, and in the end, Kaling cast a complete unknown from Canada, Maitreyi Ramakrishnan.

“[She’s] this 15-year-old girl who is absolutely incredible,” said “The Mindy Project” creator, who juggles many roles; among other credits, she’s an actress, comedian, writer and producer. “I’m really proud of that and bringing this dark-skinned Indian-Canadian-Tamil girl. We don’t typically see Tamil girls on TV. You usually see light-skinned women, so that was really exciting.”

Ramakrishnan had sent an audition video that was filmed by a friend using an iPhone.

“It was against the wall in her bedroom,” said Kaling. “You really got this window into what her life was like, which was very charming. But the thing that stood apart was that she had this thing that we really wanted to capture, which was an authentically Indian girl but who also had this kind of confidence and breeziness that we often don’t see with women of color on TV for that age. She had so much confidence…There’s nothing tentative about her, and that was really inspiring. I was like, god, I want my daughter to be the same way.”

Her daughter is now 2 years old, she said. “Last year, Christmas was very much just like, she was a baby, and I was trying to pretend that she cared about the tree, and now this year, she actually does care,” said Kaling — who celebrated her 40th birthday this year — of the approaching holiday. “Christmas is actually getting fun for me. Before I had a kid, and I was the youngest person of my generation in my family, it gets a little depressing when you’re like, oh, I’m 34, and I’m the youngest. It’s so much more fun when there’s a little kid who is excited for the holidays.”

It’s a time of year to reflect, to give back. And as part of her partnership with footwear and accessories retailer DSW, she recently got involved with Be Strong, a nonprofit that works to prevent bullying. “Given that I have a daughter now, I obviously care a lot more than I did beforehand,” she said. “I did not fully understand the plague of bullying in this country.”

Be Strong will have a presence at DSW’s first “DSWGives Do Good” pop-up, which encourages consumers to donate new or gently worn shoes. It’s a free event, located at 498 Broome Street in New York and open between Dec. 12 to 15, from 10 a.m. to 7 p.m. Starting today, the experience is available virtually on the company site. 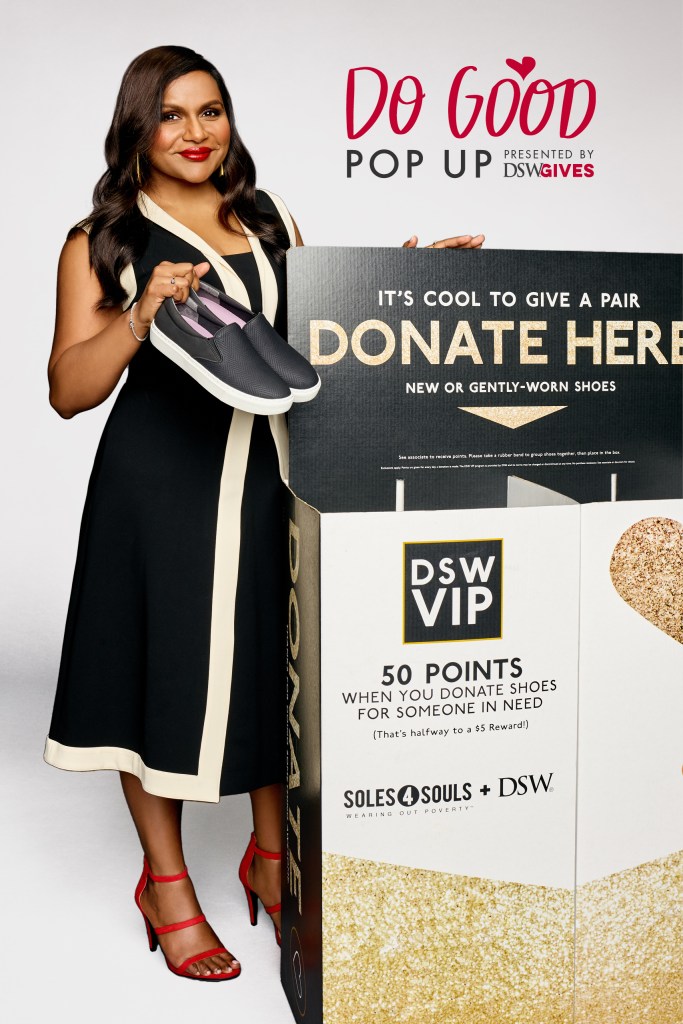 “The holidays aren’t just about buying gifts for your friends, family and loved ones,” said DSW’s chief marketing officer Amy Stevenson. “It’s important, but we also want to be about giving back. DSW is an organization that believes passionately in philanthropy.”

Since 2018, over 2 million shoes have been donated by customers in exchange for points as part of the brand’s “DSWGives” platform. It’s a collaboration with Soles4Souls, an organization that collects and redistributes new and used shoes for those in need.

“All retailers in some way are looking for something bigger than just necessarily the product they sell,” shared Stevenson. “We’re looking for experiences. We know that our younger customers are looking for that as well.” Of Kaling as ambassador, she added, “We saw what she stood for, her love for fashion…we also knew we wanted to do this tie with DSWGives, and she seemed to really connect to that. All of that together made her feel like a good fit for us. It’s amazing how our customer has bonded with her, too, the amount of positive feedback we’ve received. Our customer loves her.”

For her part, Kaling said she was excited about the opportunity, because she had shopped at the retailer since high school: “It was so cool to be able to work with a company I had this really authentic, long relationship with…They approached me, and it’s because of my love of obviously clothing and fashion and shopping and all of that, which I’ve loved since I was a kid.”

Would she start her own line?

“From your lips to God’s ears,” she said. “I would absolutely love that. That would be such a creatively rewarding thing to do. I’ve thought about it for years, but I haven’t had the opportunity or the confidence to go ahead and do it, because I know what a risky business that can be. I really want to do it right, but I would especially love that.”

With sustainability as a topic of conversation now more than ever, she noted the negative effects of consumerism.

“When you love fashion and you love to go to fashion shows and go to fancy events like the Met Gala, Oscar parties and all that, there is such focus on consumerism that goes with it,” she said. “You know, like wearing something and then it kind of disappears…More recently in the last four or five years, you see the plague that is clothes, mountains of clothes. And of course, because they are not in the United States, we don’t see them. They’re in places like Haiti and the Dominican Republic.

“What’s been really great about the royal family, Kate Middleton, Meghan Markle, and then also Michelle Obama, our royal family I guess, is, in the past three years, the emphasis on them rewearing items of clothing,” she continued. “It has been incredibly beneficial. Even for me, someone who has a big social media presence, it makes me feel emboldened to wear some of the items I have again. And it’s just awesome to show that to repeat outfits is not unfashionable. It’s just proving that we can be fashionable and not wasteful.”