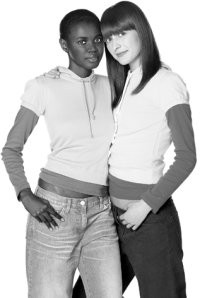 Spring arrived on Friday, and across much of the U.S. and parts of Europe the weather has matched up with calendar. That has sent junior shoppers out to the stores in droves, looking to add to their spring wardrobes. The slow economy in the U.S. and Europe has clearly influenced teens’ shopping habits — with less money to spend overall, they’re paying closer attention to prices, but are still willing to shell out big bucks for the right items according to retailers. What are the right items? Miniskirts look to be a hot seller, although buyers admitted demand for the ultra-short looks is still dependent on weather and, in places, where it’s still too cool, shoppers seem to be holding off. Junior customers also are on the lookout for non-denim bottoms — cargo pants and other military-inspired looks are strong sellers in Europe, despite the ongoing war. In terms of tops, feminine looks, including camisoles, are strong sellers in many areas, though there’s been a backlash against that at some spots on the West Coast in the U.S., where teens are returning to grunge looks.

PARIS — As spring washes over the City of Light, junior shoppers have been hitting the stores, preparing their lightweight wardrobes.

Buyers say business has been steady in the segment, but the slow economy is having an impact. Junior shoppers are buying less-expensive items, but more of them, buyers said.

“Girls are paying attention to price more than in the past,” commented Christine Samain, fashion director at LVMH-owned department store The Bon Marché. “There’s resistance to the expensive pieces, but on the whole, business is steady.”

Over at Galeries Lafayette, fashion director Odile Morvan said the junior market is “holding up pretty good. Teenagers right now are interested in getting a bang for their buck.”

Morvan said she has noticed teenagers crossing over more from traditional junior brands and buying T-shirts and bags from luxury brands, such as Christian Dior.

“That’s the biggest market trend in junior at present,” explained Morvan. “Teenage girls will spend for a little luxury if they have a little extra money from their baby-sitting jobs. On the other hand, when they come back into the junior department they look for the best price. They aren’t loyal to a brand at the junior level.”

Buyers cited a move toward more feminine looks as strong, as well as customized and vintage pieces. Tank tops have also been moving briskly.

“The miniskirt is a big story for spring,” said Morvan. “But it’s yet to take off. We’re still waiting for the really hot weather.”

At Printemps, the department store owned by Pinault-Printemps-Redoute, Levi’s Type One jeans have been big, along with sports-inspired clothes, such as zipper blousons and Seventies looks.

Galeries’ Morvan pointed out: “Jeans are not as strong as they were a couple of seasons ago. Chinos and skirts are getting hotter. Jogging-style trousers are also selling well.”

“Looks are much more feminine than last spring,” added Bon Marché’s Samain. “White, pink and khaki are the top colors.”

LONDON — After a warm weekend where temperatures approached 70 degrees, London retailers reported that shopping has picked up among junior customers.

“Miniskirts are doing so well for us right now,” said Jane Shepherdson, Topshop’s brand manager. “In every color and every style, those best tend to be in bright block colors or military inspired.”

At New Look, cargo pants are a bestseller.

Another item that Wrigley said is selling well is a twill jacket strongly influenced by Marc Jacobs, in khaki green.

MILAN — At Benetton, color is driving spring-summer sales, according to a company representative, who cited T-shirts in canary yellow, pink, red, pale blue and azure as key sellers.

Other key items at the chain include denim miniskirts and jeans in worn-looking washes. The chain is continuing to sell low-rise bottoms, but has lengthened its T-shirts. The representative also cited as a strong performer the “jungle line,” a military look mixed with flashy pink, red and orange prints that takes its inspiration from Cambodian culture and computer games. The company’s “leisure collection,” another strong seller, includes sporty cotton jersey looks printed with the names of American universities. — Stephanie Epiro

“Anything non-denim is just blowing out for us,” she said. Lambertsen-Forbes said girls are pairing cargoes with sexy camisoles, tank tops and tube tops and predicted the look will have strength through the back-to-school season. White has also shown up in Macy’s West shopping bags, including a fair number of white pants, white T-shirts and miniskirts.

“It’s head-to-toe white,” she said, noting a button-front basic mini with an unfinished hem is among the strongest silhouettes.

She said that junior sales have remained “pretty steady,” despite the war.

At Windsor, a chain of 35 junior stores based in Los Angeles, customers have banished feminine and sexy in favor of masculine and punk, according to Ike Zekaria, vice president and general merchandise manager. Among spring trends are military cuts, skull-and-crossbones prints and ties. Schoolgirl plaid, arm-warmers and studded belts are also doing well, he said. Neon trims, mesh netting, off-the-shoulder tops and vintage-screen T-shirts round out the mix.

“Basically, it went from Britney Spears to Avril Lavigne,” said Zekaria. “The customers knew that the Britney trend died out before the retailers. Retailers stayed sexy too long and didn’t go into the new grunge.”

Even so, lady-like polkadot dresses and multicolored-striped tube tops have been selling, he said.

Windsor has not experienced a decline in traffic, but business has softened because of the war, according to Zekaria.

“Our prom business has really gotten off to a nice start,” he said. “There has been absolutely no affect when it comes to patriotic pastimes like the prom.” — Kristin Young

ATLANTA — Easy, lightweight T-shirts and cargo cotton bottoms, as well as shorts and miniskirts, are among the top sellers at the Atlanta-based Rich’s-Macy’s-Lazarus-Goldsmith’s division of Federated Department Stores, according to a spokeswoman.

Gypsy-inspired looks continue to sell well at the Proffitt’s and McRae’s, division of Birmingham, Ala.-based Saks Inc., according to Vivian Fox, divisional merchandise manager for the junior area. Key items for spring include denim and crosshatch twill skirts with asymmetric hemlines at both knee and mini lengths, as well as Bohemian halter and tunic tops with prints and embroidery.