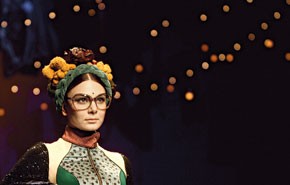 Some 57 designers showed their fall collections at the five-day event, named after the cosmetics company that is its biggest sponsor, which ran from March 29 to April 2. Held at Mumbai’s National Center for Performing Arts, an elegant, shoreside venue, the shows attracted a sprinkling of Bollywood stars, several of whom hit the catwalk.

Lakme Fashion Week took place only weeks after India Fashion Week, a rival event held in Delhi. The organizers banned designers from showing at both events, but the same preoccupation ran like a thread though both: India’s arrival on the global fashion stage.

As in Delhi, a record number of foreign buyers attended Mumbai’s show, according to Vikram Raizada, vice president and head of fashion for IMG India, which organized the event. Of around 150 buyers, more than 30 were from outside India, he said, constituting the largest number yet.

“India’s in the process of being integrated into the global fashion world,” he said, adding that several talent scouts from IMG Models in Paris and New York had come to scan the runways for new faces.

While India’s most established designers — including Manish Arora and Tarun Tahiliani — showed at Delhi, the focus at Mumbai was on new and emerging talent.

On the penultimate day, designers showing for the first time exhibited a startling diversity at the Gen Next show.

Elsewhere, even within one 15-minute show, there was a bewildering range of trends. Many designers seemed to be appealing to two different markets at once: the domestic market, which constitutes more sales but demands a more traditional, subcontinental look, and the global stage, with its appetite for edgy, Western cuts.

“These guys have got to decide what they’re doing: East or West,” said Albert Morris, a consultant from Browns of London. “It’s too messy otherwise. What we are trying to find is a silhouette as contemporary as Lanvin that uses Indian fabrics and techniques.”

Morris saluted the work of Anand Kabra, who trained at the London College of Fashion. Known for unifying a collection under a single theme — unusual in India — Kabra took inspiration from Italian filmmaker Luciano Vincenzoni’s movie, “Malena,” about a 12-year-old boy who fantasizes about a beautiful woman. The resulting collection played on the idea of an untamed rose: flower motifs featured on short dresses and saris in a palette of black, white, teal and ocher.

Vineet Bahl, who showed a fun resort line with a strong Indian aesthetic, was another to watch, said Morris, as was Nachiket Barve, who showed off a creative blend of textures — matte and shiny, rough and smooth — with his elegant silhouettes.

Foreign buyers did, however, have some complaints about doing business in India.

Veronique Poles, a fashion consultant from Paris who works with the Indian designer Narendra Kumar, who showed in Mumbai, said Indian designers had a reputation for being a little disorganized — from failing to provide a good range of sizes to delivering goods late, or incomplete.

“But there is something happening in India, no question,” she said. “If they can solve these problems, then India is going to be just perfect. There’s no lack of creativity and such richness of fabrics and embellishments and techniques.”

One of the better-established designers at Lakme Fashion Week was Sabyasachi Mukherjee. He took nature as his inspiration for a collection that featured skirts with fish-skin prints and dresses embroidered with animals and birds, all in an earthy palette redolent of vegetable dyes.

Mukherjee has sold his designs overseas, most notably in Browns in London. “I think the best thing new Indian designers can do is to really focus on their work here, in India, and then when they are established, they should venture out,” he said.

Whether they venture out or not, foreign buyers will increasingly come looking for Indian designers. Many buyers only wished, they said, that they could attend one Indian fashion week in one city rather than having to choose between two.