A two-day interactive fashion and art installation heralding the signature style of global icon Minnie Mouse will take place at The Paper Agency in Los Angeles. 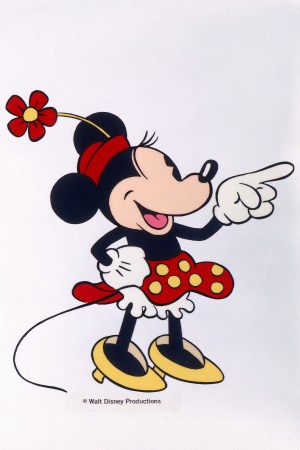 Consider this: Who made polka dots chic? Who else could pull off bloomers for 88 years? And who else appears so ageless — even down to the bow in her hair? After all, her signature polka dot skirt was inspired by Coco Chanel’s Easy Jersey collection when she made her debut in Walt Disney’s groundbreaking 1928 animation “Steamboat Willie.” (Who knew Uncle Walt was a Chanel fan?)

She’s had her fair share of red carpet moments over the decades and now she’s about to get another one.

“Minnie Rocks the Dots,” a two-day interactive fashion and art installation heralding her signature style will take place at The Paper Agency in Los Angeles. A red carpet preview event is slated for National Polka Dot Day — Jan. 22 — before opening to the public on Jan. 23. The exhibit will focus on Minnie’s global influence on fashion and pop culture since her black-and-white introduction in 1928 and her evolution into color.

Minnie Mouse has been considered a “fashionista” from the get-go. Her fun-loving, sweet-natured character was based on the Twenties flapper as portrayed by actress Colleen Moore. From her early pillbox hat, which inspired women’s hat trends, to her famous bow and ears and her penchant for pink and red, Minnie’s style has been admired by such current-day celebrities as Victoria Beckham, Katy Perry, Sarah Jessica Parker and Lady Gaga.

Her personality traits run the gamut from being incredibly sweet, often tame, occasionally naïve and a damsel in distress to being very intelligent and at times, outspoken. She has been known to lose her temper on occasion due to Mickey’s forgetfulness. In her 88-year career in feature films, television, video games, merchandise, theme parks and personal appearances, Minnie has emerged as one of the six major classic characters of the Walt Disney Co., who also include Mickey, Donald Duck, Goofy, Daisy and Pluto.

Fashion designer Christian Siriano will reveal a custom dress designed exclusively for Minnie during the preview night on Jan. 22.

He designed an A-line cocktail dress with allover over scale bows. “The crystals over them represent our version of polka dots,” he said. He also designed shoes that have a special adornment. He declined to reveal the color of the dress until closer to the event. Asked about Minnie’s longevity as a fashion icon, he said, “She lights up a room and appeals to all generations.”

“Minnie Mouse has long-served as a fashion muse and appeared in runway shows for designers around the globe,” added Soo Koo, vice president of product development, Disney Consumer Products. “Her classic polka dot look has been continually reimagined by the fashion industry through the decades and continues to drive trends today.”

She said that over the last few years, Disney has ramped up its fashion collaborations for Minnie with brands such as Forever 21, Ana Sui and OPI.

On the heels of the successful “Minnie: Style Icon” exhibition during London Fashion Week, “Minnie Rocks the Dots” will highlight iconic photographs, archive imagery and sketches from the Thirties through the present day. Celebrity portraits of Twiggy and other fashion icons will be on display. In addition to Minnie sporting her trademark polka dot dress, the exhibition will spotlight custom dresses worn by Minnie herself from countries including Russia and Mexico, as well as fashion pieces from around the world, directly inspired by Minnie.

“Minnie: Style Icon,” which took place at Blacks Members Club in London last September, featured such highlights as Herb Ritts’ 1987 shot of Madonna sporting a pair of mouse ears in her Tokyo hotel room; a similarly accessorized Chanel Iman on the back of an elephant for Vogue Germany, and photos from early 2015 of British fashion designer Ashley William’s Minnie Style collection for Dazed magazine featuring Georgia May Jagger. It also had Jagger’s own photos of Minnie in a domestic setting.

In 2012, Disney tapped a slew of London-based designers to commemorate Minnie’s status as a cartoon fashion plate. Participating in the project were such designers as Giles Deacon, Michael van der Ham and Richard Nicoll. The designs were showcased during London Fashion Week before being auctioned off via eBay’s charity program, with proceeds going to the British Fashion Council/Bazaar Fashion Arts Foundation.

Minnie had another big fashion moment in 2012 when she strutted the runway in a Lanvin dress in an animated short video as part of Barneys New York’s holiday windows. In the animated film — which was criticized for showing a super skinny Minnie — Minnie embarked on a fashion adventure in Paris, walking the runway in Lanvin and rubbing elbows with Linda Evangelista, Daphne Guinness, Naomi Campbell and Lady Gaga. Minnie again wore Lanvin during Disneyland Paris’ celebration of its 20th anniversary in 2013. Via a letter sent from Mickey Mouse, Alber Elbaz, former Lanvin designer, was asked to design a special dress for the occasion. Dressed in her usual polka dots, Minnie paid a visit to Lanvin’s boutique and design studios and proved herself to be “a real fashionista,” as Elbaz said in a video posted on Lanvin’s Facebook page and YouTube channel. “When I showed her two dresses, she knew exactly which one she wanted,” Elbaz said in 2013. “She likes to show her heels and loves earrings, jewelry, colors and everything that sparkles.”

Fans who attend the “Minnie Rocks the Dots” public event on Jan. 23 will get a peek at upcoming Minnie-inspired collaborations, in addition to being able to purchase new, limited-edition items in The Dot Shop pop-up store. The exhibition at The Paper Agency will be free and open to the public on Jan. 23 from noon to 8 p.m. The exhibition can be followed @MinnieStyle on Instagram.

The new Minnie Mouse Signature Collection at the Disney Store and disneystore.com carries apparel, stationery and accessories featuring Minnie’s signature polka dots and bows. On National Polka Dot Day, Disney Store will release a limited-edition Minnie Mouse doll to commemorate Disney’s first lady of fashion. Some 3,000 are being manufactured and will be available in select Disney Store locations worldwide and online. The doll retails for $79.95 in the U.S.