Season two of the contemporary offering from Jason Wu continued with the playful updates of Sixties staples. 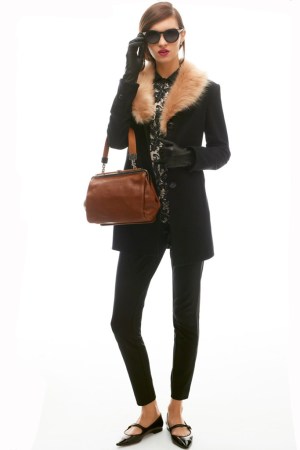 Season two of Miss Wu, the contemporary offering from Jason Wu that’s exclusive to Nordstrom through the end of this year, continued with the playful updates of Sixties staples — striped sweaters and shift dresses cut clean and fitted — that he introduced for spring. Wu’s angle on the market is pretty polish for the younger woman who will grow up to be a lady, so some of the dresses and skirts featured a lace underlay, with belts tied in a bow. He offered a lot of color and texture, such as nice jacquards and waffled knits, to stand out against the saturation of black and white that has flooded contemporary floors. Yet Wu is not immune to the category’s craving for trends. Thus, a quilted leather dress and shearling bomber jacket, and a few black-and-white ginko leaf prints, rounded out the mix.